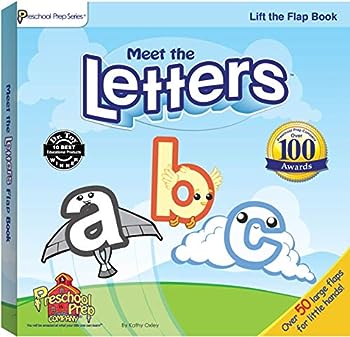 The BEST book for learning letters!

Published by Thriftbooks.com User , 14 years ago
We have many alphabet books but this one is by far the best! Would highly recommend it. Both of my children (ages 2 & 4) love to look at it.

Great book to go along with Meet the Letters DVD

Published by Thriftbooks.com User , 14 years ago
I this book to accompany the Meet the Letters DVD that my son loves so much. He sits with it every time that he watches the DVD. He always makes sure that he is on the right page that matches the letter on the TV. - Two months ago a friend gave my son Meet the Letters. He was 18 months old. He immediately took to this DVD and wanted to watch it all of the time. Within 3 weeks he knew all of the upper-case and lower-case letters. My wife and I couldn't believe it. He was 18 months old and while his friends were obsessed with trains and cars, he became obsessed with letters. He now points at letters everywhere we go and reads the letters in books and on signs. We just bought all of the other DVDs in the Series (Meet the Numbers, Meet the Shapes and Meet the Colors and are expecting great results). I will report on those once we get them. I have told everyone I know about this amazing video. I didn't think it was possible for my son to learn letters at this early age but it was so easy for him. I bought Meet the Letters for two of the children in our play group and they have both had similar results (one learned in two weeks and the other in 3). My son is on his way to literacy!

My son loves this book!

Published by Thriftbooks.com User , 15 years ago
My son 20 month old son learned all of the upper and lowercase letters from the Meet the Letters DVD (in three weeks). I bought him this book and he doesn't want to watch the video without it. He turns to the right page as the letter comes on the screen. He always takes it in the car and I hear him saying letter names in the same voice as the characters from the video. I couldn't be more impressed with this series.

My twins love this book!

Published by Thriftbooks.com User , 15 years ago
I have 18 month twins who learned their letters in about two weeks from the Meet the Letters DVD. I bought them the lift the flap book and they fought over it so much that I had to get them each one. They read the books while they are watching the video and love to lift the flaps as each as each letter appears on the screen. I also love the construction of these books. Every other lift-the-flap book in my house has all of the flaps torn off. This book is very sturdy and the flaps aren't the kind that you can tear off. This is the only kind of lift-the-flap book that can withstand the abuse of my twins! They haven't torn a single flap. I highly recommend this book to anyone who wants to teach letters to their young children and especially to any kids who love the video as much as mine.

Published by Thriftbooks.com User , 16 years ago
After watching the DVD's my son loves the Preschool Prep flap books. As a matter of fact he reads them to me! He just turned 3 and Preschool Prep taught him letters and numbers in under two weeks!
Copyright © 2020 Thriftbooks.com Terms of Use | Privacy Policy | Do Not Sell My Personal Information | Accessibility Statement
ThriftBooks® and the ThriftBooks® logo are registered trademarks of Thrift Books Global, LLC