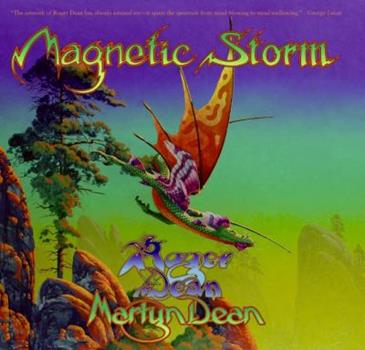 by Roger Dean and Martyn Dean

First published in 1984, Magnetic Storm followed in the groundbreaking footsteps of the million-selling Views (1975). Once again employing a large format and lavish production to showcase the unique art and design of Roger Dean, this iconic book was a retrospective of the astonishing breadth of work accomplished since the publication of its predecessor. Through Views and Magnetic Storm, Roger Dean established a devoted readership, while Dragon's Dream...

Published by Thriftbooks.com User , 15 years ago
I met artist Roger Dean after being invited to an exhibition of his art in San Francisco, 1991. I had long admired, no, worshipped his art in the release of "VIEWS", the 1st collected work devoted solely to the Dean brothers, Roger and Martyn. The color schemes combined with the visions of alternate landscapes of exploded planets and truly wondrous terrains have become iconic landmarks in the art world. It is a vision so deep, it is often hard to fathom, and evokes the seldom used Japanese phrase, Yugen! The work is unmatched anywhere else. The artist is as warm and human as anyone I've ever met, and one hopes for their continued success. He is currently designing communities in his vision in the UK named "Willowwater", and has done much art for the Prog scene in Penn; "Nearfest", if you are looking for other printed examples of his work.

Published by Thriftbooks.com User , 16 years ago
Magnetic Strom continues the record started in "Views," documenting the ongoing work of Roger and Martyn Dean. There's lots of Roger's famous artwork, album covers for Yes, Asia, and others. This also features the stage sets for Yes tours - amazing fantasy constructions, even more amazing for the rigorous demands imposed by the need for easy transportation and setup. It even shows some of the Deans' experiments in biomorphic architecture. There are also some covers from books that the Deans' Paper Tiger published, including some that I still enjoy. This collection appeals to anyone who remembers those times, who enjoys fantasy art, or who likes to see the breadth that creative minds can span. Enjoy! //wiredweird

More From Roger and Martyn; Needs a Reprint!

Published by Thriftbooks.com User , 21 years ago
The Dean brothers are 2 of the most innovative artists of the 20th century. Roger has designed many of Yes and Asia's album covers (Drama, Yesshows, Asia, and Alpha are all featured in this book!), designed tour posters and booklets for other major rock bands and contributed on the Album Cover Album books. His brother Martyn has designed many of Yes' stage sets (Topographic Oceans, Drama, and Relayer) and has acted as Yes' photographer both for album shots and on tour. Together and seperately, Roger and Martyn have also worked on animation, video games, architecture, and an invention of Martyn's which is called a retreat pod (sort of like a futuristic sleeping bag with the options of an entertainment center!). I'd like to see this gem back in print and see a 3rd volume where Roger and Martyn have left off since this was published.

See into the eye of the magnetic storm....

Published by Thriftbooks.com User , 21 years ago
Creating a sucessor to VIEWS is a hard enough concept, but Roger Dean has produced another master document of his work. Following along the same path as his first book, again we get the album size/shape presentation and tons of full color reproductins of Dean's sketches and renderings. This book was the first whereby I truly grasped Dean's illustrations as architechtural renderings, as lots of the projects covered in this volume are 3D projects worked on with his brother Martyn: built YES stages, modelling retreat pods and designing home and buildings. Imagine a YES album cover as a dwelling, and grab this book to show you how and why it is possible. Stunning follow-up, fantastic production values not seen often in modern paperbacks.

Published by Thriftbooks.com User , 22 years ago
A blend of many different art forms, they combine architecture, fantasy art, music. How can two men be able to design for all areas of life. Read this book to find out. I have owned a copy for fifteen years and still find something new each time.
Trustpilot
Copyright © 2022 Thriftbooks.com Terms of Use | Privacy Policy | Do Not Sell My Personal Information | Cookie Preferences | Accessibility Statement
ThriftBooks® and the ThriftBooks® logo are registered trademarks of Thrift Books Global, LLC