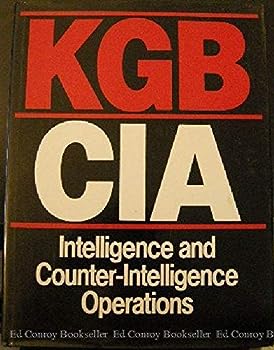 by Celina Bledowska and Jonathan Bloch

Great book. This description may be from another edition of this product.

A history of questionable actions by the CIA

Published by Thriftbooks.com User , 17 years ago
While all of the details will only slowly become public knowledge, it is clear that the CIA was incompetent in gathering intelligence about Iraq under Saddam Hussein. Furthermore, a recent news report stated that the intelligence gathered about the Iranian nuclear program was almost totally wrong. This should not surprise anyone who has paid attention to the history of the organization. In this book, which despite the title is largely about the American CIA rather than the Soviet KGB, you read about many of the ways the CIA has failed. Those failures started almost from the first day the organization existed. There were almost comical attempts to overthrow Enver Hoxha, the communist dictator of Albania. They failed to predict the North Korean invasion of South Korea and they completely overestimated the response of the Cuban people to the invasion of the island at the Bay of Pigs. Their assassination attempts against Fidel Castro were ridiculous and I still remember Senator Edward Kennedy laughing at some of their reported antics during the hearings conducted by the Church committee in the `70s. The CIA also completely failed to understand how weak the Shah's regime was in Iran and how hated his secret police were, which were largely trained by the CIA. His downfall, like that of the Soviet Empire in Eastern Europe was completely unanticipated. The years between 1946 and 1991 are generally called the Cold War, because the rivalry between the United States and the Soviet Union never reached the point where forces from both sides were shooting at each other. However, to the people in nearly every other place on Earth, the war was very real. We tend to think of the millions that were killed in Korea and Vietnam when exceptions are considered and this is due to the American involvement in those places. Less well known and generally unconsidered are the small, brutal wars where the CIA was involved. Places such as Chile and Argentina, where the CIA backed military coups that led to internal "dirty wars" when the military forces executed thousands of their opponents. No American citizen can read this book and not be alarmed at the horrendous record that the CIA has amassed over the years. There is an old joke that Central Intelligence Agency is a contradiction in terms and the events recounted in this book make it sound like a truism rather than an attempt at humor.
Trustpilot
Copyright © 2022 Thriftbooks.com Terms of Use | Privacy Policy | Do Not Sell or Share My Personal Information | Accessibility Statement
ThriftBooks® and the ThriftBooks® logo are registered trademarks of Thrift Books Global, LLC