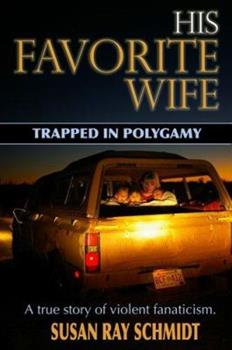 His Favorite Wife: Trapped in Polygamy

A RIVETING MEMOIR OF LIFE INSIDE ONE OF NORTH AMERICA'S MOST NOTORIOUS POLYGAMOUS CULTS She had no choice in the matter none of the girls did. Her mission was to give birth to and raise many children... This description may be from another edition of this product.

Published by Thriftbooks.com User , 5 years ago
If you're interested in the different groups who practice polygamy, you have to read "His Favorite Wife". It's about the LeBaron group in Mexico though, not the FLDS in Colorado City AZ. Susan writes in a way that draws you into her story & makes you feel like the proverbial 'fly on the wall'. I've actually read & re-read it several times. Susan was married to Verlan LeBaron. She was a sister-wife to Irene Spenser who has also written several books about the group. The best of Irene's books (imho) is "Cult Insanity". I will warn you about this book though. Don't start it if you only have 15-20 minutes to read. It's that hard to put down! And reading in bed? Only if you don't have work or plans for the next day because you'll suddenly find the sun coming up. It's that compelling! But, if you're interested in polygamy, religious sects, or just plain wacko men that go off the rails, this is a great place to start. The LeBaron's are actually even more interesting than the FLDS & Ervil LeBaron, (Verlan's brother),was even crazier & MUCH more sinister & deranged than Warren Jeffs. You won't be disappointed & you'll probably pass your copy along to a friend so you can both talk about it. Also, it's an EXCELLENT pick for a book club! Thank you Susan for opening up about a long & very hard & difficult part of your life. I only wish you'd write more books!
Trustpilot
Copyright © 2022 Thriftbooks.com Terms of Use | Privacy Policy | Do Not Sell or Share My Personal Information | Accessibility Statement
ThriftBooks® and the ThriftBooks® logo are registered trademarks of Thrift Books Global, LLC