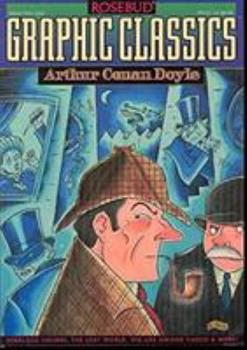 (Book #2 in the Graphic Classics Series)

This second edition is completely revised, with over a hundred pages of new material. New to this edition are comics adaptations of Sherlock Holmes in "The Adventure of the Engineer's Thumb" by Rod... This description may be from another edition of this product.

Published by Thriftbooks.com User , 16 years ago
A new edition, "Graphic Classics: Arthur Conan Doyle" is updated and revised, with five new stories adapted in the Graphic Classics style. As with the previous release, several different illustrators adapt and interpret some of Doyle's most famous stories and creations, as well as a few lesser known gems. This second edition is less Sherlock Holmes heavy, containing only two adaptations of the Great Detective. Also removed is the lengthy "The Lost World," which allows for room for more short stories. Still missing is an adaptation of Doyle's mummy tale "Lot 249," but overall, I prefer this version to the previous release. Included are: A Parable - A clever little allegory about cheese mites debating where cheese comes from. The Adventure of the Copper Beeches - Returning from the first edition, a fascinating Sherlock Holmes adventure well-adapted by Rick Geary. Captain Sharkey - A brutal Pirate adventure, with an illustration style that fully plays to the strengths of the story. The Los Amigos Fiasco - Possibly the best tale from the first edition, an amusing tale of an Electric Chair gone wrong, with a complimenting visual style. Very funny! Master - A touching, short poem. The Great Brown-Pericord Motor - Milton Knight adapts this amusing tale of greed and invention in his usual comic style. How the Brigadier Came to the Castle of Gloom - Introduced in "Graphic Classics: Adventure Classics," one of Doyle's comedic characters, Brigadier Gerard, returns in a tall tale of romance and daring do. The Adventure of the Engineer's Thumb - A new Holmes adaptation, brilliantly illustrated by Simon Gane. More please. The Ghosts of Goresthorpe Grange - An unusual ghost story of a man who buys an ancestral mansion and is disappointed to find that it is not haunted. What is the use of an ancient castle with no ghost?

Dinosaurs, Fairies and the Detective

Published by Thriftbooks.com User , 17 years ago
Continuing their Graphics Classics series, "Graphic Classics: Arthur Conan Doyle" allows several different illustrators the chance to adapt and interpret some of Doyle's most famous stories and creations, as well as a few lesser known gems. Most of the stories here are longer than in other offerings in the Graphic Classics series, but all are well done and respectful to the source material. Included are: The Adventure of the Copper Beeches - A fascinating Sherlock Holmes adventure well-adapted by Rick Geary. The Los Amigos Fiasco - An amusing tale of an Electric Chair gone wrong, with a complimenting visual style. The Adventures of the Speckled Band - Another fine Sherlock Holmes adaptation, with perfect artwork accompanying the original text. Master - A clever, short poem. The Lost World - Doyle's famous dinosaur tale. Very well done, in grand adventure style. The Coming of the Fairies - An illustrated text version of Doyle's fairy beliefs. The Hound of the Baskervilles - Sherlock Holmes most famous adventure, given good treatment. How it Happened - A quaint ghost story. Also well done. The book comes off as Sherlock Holmes heavy, which was a surprise to me, as the Graphics Classic series seems to focus on lesser-known works of authors. I would have liked to have seen an adaptation of Doyle's mummy tale "Lot 249," or some of his other horror work. However, as a Sherlock Holmes fan, I was very pleased with this volume.
Trustpilot
Copyright © 2022 Thriftbooks.com Terms of Use | Privacy Policy | Do Not Sell My Personal Information | Accessibility Statement
ThriftBooks® and the ThriftBooks® logo are registered trademarks of Thrift Books Global, LLC