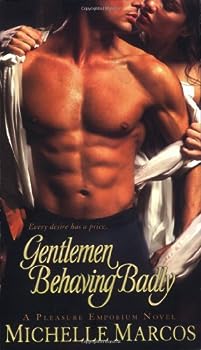 (Book #2 in the Pleasure Emporium Series)

Published by Thriftbooks.com User , 13 years ago
This book was even better than I'd hoped. It's funny, it's passionate, it's sexy and it's completely unique. This is the best historical romance I have read in a long, long time. Just wanted to say how much I loved it.

Published by Thriftbooks.com User , 13 years ago
Her father was arrested for a crime that Mina Halliday knows he did not commit; his jewelry shop taken from him and his family. While he lingers in ruin in prison, Mina went to the Pleasure Emporium seeking employment although she lacked the beauty and skills of the ladies. However, Madam Finch, the tall owner, hires her to serve drinks and to lure men with her sensual letters. Mina also hops to find the aristocratic miscreant who framed her father. Chief Constable Salter Lambrick investigates a homicide of a government official. His only clue is the sexy letter he found inside the victim's pocket. Salter goes to the Pleasure Emporium to interrogate the authoress, but finds a strange intriguing mystery there. The writer is obvious a woman of innocence serving drinks at the brothel's bar. He finds her pretty and intelligent; a lethal combo for the detective who agrees to help her uncover the villain who destroyed her family. The second Regency Pleasure Emporium brothel tale (see WHEN A LADY MISBEHAVES) stars a charming "bad girl" whose wickedness is to write sensual letters enticing the male Ton to come to the bordello. The story line is fast-paced and filled with mystery, suspense and romance. Fans will relish the strong lead couple pairing and the antics of the support cast especially those inside the brothel. Although somewhat similar in tone to the first unique entry, sub-genre readers will enjoy this engaging tale of love inside a house of ill repute. Harriet Klausner

Published by Thriftbooks.com User , 13 years ago
Out of desperation Mina Haliday accepted employment at a notorious bordello but not being of notable beauty she isn't expected to service the clients. Instead she serves drinks in the bar and uses her vivid imagination and collection of erotica novels to compose letters to noblemen in order to lure them to the Pleasure Emporium. Mina's naughty correspondence is successful in enticing wealthy noblemen into the bordello for a night of illicit entertainment. However, her true goal is to find the man responsible for her father wrongfully being branded a criminal and deported to Australia's penal colony. She just hadn't anticipated her suggestive letters bringing her to the attention of the Chief Constable who's investigating the murder of a government official. Chief Constable Salter Lambrick has a murderer to catch. Since the victim was strangled with a leather whip and a suggestive invitation was found in his pocket it's a distinct possibility that a trip to the bordello may provide the answers he seeks. What he gets instead are more questions. He quickly realizes that there's more to these missives than meets the eye. The young woman responsible is one of the most fascinating creatures he's ever met. As Salter investigates Mina and just how she knows Lord Prescott he discovers that there's more to her letter writing then simply luring wealthy noblemen to the Pleasure Emporium. In her bid to prove her father's innocence she's inadvertently become a liability in Salter's murder investigation. The more time they spend together, the more complicated things become and it's soon obvious that her father's situation and the murder are somehow linked, but how and why? I was pleasantly surprised by just how charming I found the storyline and characters in GENTLEMEN BEHAVING BADLY. Salter and Mina play off each other beautifully. They're both wrapped up in solving their own cases and certainly didn't expect to fall for each other. I loved the scenes that take place inside the bordello. Each scene is suggestively hot without being lurid. Michelle Marcos infuses plenty of humor and suspense into this historical tale which readers won't want to put down. GENTLEMEN BEHAVING BADLY is the first book in Ms. Marcos's PLEASURE EMPORIUM trilogy. The first book, WHEN A LADY MISBEHAVES was released in October 2007. Hopefully readers won't have to wait too long for the last book, WICKEDLY AFTER EVER! Chrissy Dionne (courtesy of Romance Junkies)
Trustpilot
Copyright © 2022 Thriftbooks.com Terms of Use | Privacy Policy | Do Not Sell My Personal Information | Accessibility Statement
ThriftBooks® and the ThriftBooks® logo are registered trademarks of Thrift Books Global, LLC