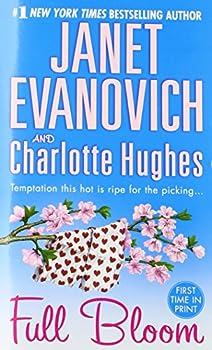 by Janet Evanovich and Charlotte Hughes

This description may be from another edition of this product. This winter promises record-high temperatures-and A DESIRE that reaches the boiling point... Beaumont, South Carolina, is on "sizzle" this February. So is its newest entrepreneur, Annie Fortenberry,...

Published by Thriftbooks.com User , 14 years ago
If you want a hard core, hard boiled murder mystery this is not the book for you. If you want a light-hearted, book that will cause you to laugh out loud in place, read this book as well as others in this series. I was not impressed with the first books, but they did improve as they proceeded. Branching out into other characters that interact and populate Jamie/Max's town of Beaumont has improved the books greatly. The wedding of the century as well.

Published by Thriftbooks.com User , 16 years ago
I loved the previous books by Evanovich and Hughes following the trials and tribulations of Jamie and Max, but I think I enjoyed this one even more. Full Bloom switches to a whole new set of characters (don't worry, the old ones stop in to visit--often!) Annie is this fiery red-head. She's short, smart, smart-mouthed, and has a temper that can make the almost strong man weep. She happens to run a bed and breakfast that has been in her family for generations and she inherited from her grandmother (it just so happened to be a bordello in a previous life). There are two, funny old ladies who are permanent residence and the psychic, formally introduced in a previous book as a visiting guest. (Of course she attracts the ghost) Then there is the handyman, a good for nothing drunk, which begins the story. Why, because Annie has been hired by Jamie and Max to hold their wedding at her bed & breakfast, and the handyman is no where to be found. When he does show up, Annie decides to teach him a lesson by chasing him around a tree, swinging at him with a rolling pin. When a stranger arrives and tries to stop the ruckus, he gets beaned in the head with the rolling pen--twice! Of course the stranger is HOT and Annie feels terribly guilty. He threatens to sue, she offers lunch and the help of the retired doctor next door. Only the stranger doesn't know the retired doctor is retired from veternarian medicine and accidently gives him a horse tranq. Trust me, it only gets better. Later in the story, Annie's husband's (the one she thought deserted her three years before) body turns up in her back yard and she is accused of the murder. The good looking stranger turns out to be a P. I. hired by Annie's mother-in-law, and basically the whole world goes insane. And just think, I only covered the first chapter or two! Happy reading!

Published by Thriftbooks.com User , 16 years ago
Now this is a book I could sink my teeth in to. A romance-Mystery-Comedy that I really enjoyed reading. As usual Janet Evanovich has done it again. Written something that is true brilliance. Hope to see her on the top of the New York Times bestsellers soon! also read in same genre: Fire In The Ice by Katlyn Stewart and Good in Bed by Jennifer Weiner

Published by Thriftbooks.com User , 16 years ago
Twist and turns, sexy and wonderful....a bit naughty and oh so nice. You will love this book from the moment you crack it open. I haven't read the other books, but I will now! Also recommended: Fire In The Ice by Katlyn Stewart

Published by Thriftbooks.com User , 16 years ago
In Beaumont, South Carolina, Annie Fortenberry is trying to prepare her historical mansion turned B & B into a wedding reception for her best friend Jamie Swift and millionaire Max Holt. Her handyman Erdle Torney who came with the place she inherited from her grandmother has failed to do his job so she loses her temper and goes after him with a rolling pin. Visitor Wes Bridges gets in the way and is knocked out. A gardener borrowed from her neighbor finds human skeletal remains in an isolated area where foliage has grown. The victim is Annie's spouse Charles who allegedly ran away several years ago. In fact, Wes is a private investigator working for Charles' mother to prove that Annie lost her temper and harmed her son. As the police suspect Annie as the killer, Wes believes she is innocent, but wonders if that is because he really likes her when she is not holding a rolling pin. This amusing romantic who-done-it has the audience laughing from the moment Wes finds out how insane the Peach B & B is that is after he awakens from a bonking and swallowing a horse tranquilizer given by a retired vet. The story line gets even zanier, but never loses focus on the murder investigation handled by the cops and Wes separately. FULL BLOOM is a strong comedic romantic mystery that readers will want more plums from Janet Evanovich and Charlotte Hughes. Harriet Klausner
Copyright © 2020 Thriftbooks.com Terms of Use | Privacy Policy | Do Not Sell My Personal Information | Accessibility Statement
ThriftBooks® and the ThriftBooks® logo are registered trademarks of Thrift Books Global, LLC