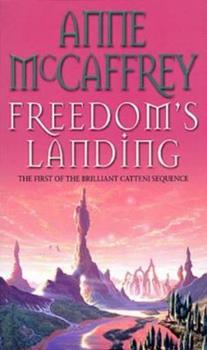 (Book #1 in the Catteni Series)

Kristin Bjornsen lived a normal life, right up until the day the spaceships floated into view above Denver. As human slaves were herded into the maw of a massive vessel, Kristin realized her normal... This description may be from another edition of this product.

My first McCaffrey book and I thought it was great!

Published by Thriftbooks.com User , 17 years ago
I didn't really expect too much when I picked this book up (after hearing some less than encouraging remarks reguarding other works of McCaffrey), but I was pleasantly surprised to find that I almost immediately got caught up in this one and ejoyed it the whole way through. While its true that the editing job was insufficient (or maybe it wasn't even proof-read after the type-setting?), I didn't think that it really took too much away from the overall story. The characters were great (I especially liked Sergent Mitford) and McCaffrey was able to keep the excitment level at a fairly high point throughout the book. My favorite thing about the book is the concept of world building. Its cool as hell that the characters were able to start from basically nothing and progress over such a short period of time (3 weeks?) to become nearly self-sufficient. This isn't so outrageous as some others (see other reviews) would have you believe either, since the world already contained much of what the people needed including: housing, food, electricity, mechanicals, and electronics. Basically, this is a great book with tons to be praised and little to be criticized. The relationships between the different alien species and the remarkable tale of human survivorship make for a thrilling read. I strongly reccomend this book and plan on reading other McCaffrey books in the near future.

Published by Thriftbooks.com User , 20 years ago
The book, though it was fairly light, was a wonderful beginning to a trilogy. It had a fairly good plot and also many twists and turns that weren't completely expected.

Published by Thriftbooks.com User , 20 years ago
Unaware that this was a series, I picked this audio book up from the public library and was pleasantly surprised by the richness of the characters and plot. The audio version puts the listener right into the action and really brought out each of the character's personalities. I loved it! I immediately purchased the other installments (in unabridged audio format of course). Now I understand there's a fourth installment, Freedoms Ransom, due out in June...can't wait.

Published by Thriftbooks.com User , 21 years ago
I am amazed at the talent of this lady. First she gave us a whole new world in the DragonRiders of Pern series.. but now, she has surpassed her self.. Not only a new world, but an interspecies love affair that is soooo convincing.. Action,suspense, drama, this book has it all..Her characters are well developed and you get the feeling that you really know these people.. and can sympathize with them!!Any Anne Mc Caffrey fan will be delighted with this new series.. thought provoking and at times, heart=warming.

Published by Thriftbooks.com User , 22 years ago
McCaffrey's tale of humanity struggling to survive on a harsh new world appeals to the same frontier spirit that makes people enjoy stories of the Wild West. Her tough yet sensitive characters grab your heart - you really care about what happens to them. This trilogy is a fairly fast and enjoyable read and is highly recommended to McCaffrey and fantasy/sci-fi fans.
Trustpilot
Copyright © 2022 Thriftbooks.com Terms of Use | Privacy Policy | Do Not Sell My Personal Information | Accessibility Statement
ThriftBooks® and the ThriftBooks® logo are registered trademarks of Thrift Books Global, LLC