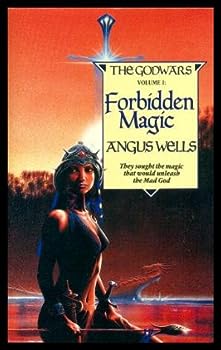 (Book #1 in the The Godwars Series)

This description may be from another edition of this product. In the time of the beginning, when the First Gods created all things, they brought forth two children, Tharn and Balatur, lesser gods, to walk upon the new world. But Balatur was arrogant. Tharn was...

Awesome!...but slow out of the gate.

Published by Thriftbooks.com User , 15 years ago
I acquired this book on accident. A friend found it in the trunk of his car and assumed it was mine. I layed claim to it since he was just going to throw it away otherwise (Barbarian!). The book turned out to be the usual "young man, feeling oppressed, runs away in search of adventure" storyline. But then, about halfway through the book it became suprisingly good. The plot twists in the later books get even better. If you can get through the first half of Book 1, you will be rewarded for you effort.

Among my favorite titles...

Published by Thriftbooks.com User , 18 years ago
This, as well as the other two of the series, is among my favorites. I've read all three of the books, and I find them hard to put down, once you get past the characters' backgrounds, as well as the history of the world they live in.Calandryll, a fopish, book-engrossed prince, leaves Secca, his father's kingdom, in search of the Arcanum, a book rumored to hold the knowledge of the resting place of the Mad God Tharn. This book is also sought by the wizard Azumandias, who turns out to be dead at the hands of his son....Ah, but the rest, you've to figure out for yourself by reading it.

Published by Thriftbooks.com User , 18 years ago
Being an avid science fiction and fantasy reader I am constantly on the lookout for new authors and tales to capture my interest. With this novel Angus Wells kicks off his Godwars saga. As a whole the series is very enjoyable, if not particularly original. I found this book to be good, if a trifle slow in places. The story follows the scholarly prince Calandryll on his voyage to recover the mysterious arcanum. With the help of Bracht the kern freesword, and Katya the beautiful and capable swordswoman of the Vanu. Calandryll matures from a fopish princeling to a capable adventurer. Assailed along the way by assassins and evil wizards the three travel into hostile lands to find the book, so that it may be destroyed. The characters tend to be superficial at times, and the plot limps heavily in several places. The world and concept have a great deal of potential, but the plot is fairly predictable. Don't expect this to be the best book you have ever read, but it is still very entertaining.

It was one of the best books that I have ever read.

Published by Thriftbooks.com User , 22 years ago
This book was one of the first fantasy books that I had ever read, and it helped make me a very devoted fan of fantasy books. In my opinion Angus Wells ranks right upper there with writers such as J.R.R.Tolken, and David Eddings. I have loved his works and I can not wait until he writes some more

Published by Thriftbooks.com User , 23 years ago
Imagine being a son of royalty; on a, seemingly, impossible quest, being hunted by a crazed wizard and the Brotherhood of Assassins (employed by your own flesh and blood), your one true love married off to your brother, traveling with a freesword and a warrior woman from the land of gods and goddesses. Wouldn't life be grand? And did I forget to mention that if you don't find the ancient Arcanium before the crazed wizard, the whole world will go BOOM?
Copyright © 2020 Thriftbooks.com Terms of Use | Privacy Policy | Do Not Sell My Personal Information | Accessibility Statement
ThriftBooks® and the ThriftBooks® logo are registered trademarks of Thrift Books Global, LLC