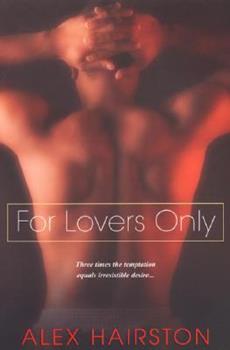 Doesn't Get The Credit He Deserves

Published by Thriftbooks.com User , 12 years ago
For Lovers Only is a steamy tale of three lovers that will keep you captivated. The main character Joel has so many lovable characteristics that you will find him irresistable. What I enjoyed most was that the book was filled with erotic scenes, but Mr. Hairston still developed his characters and his storylines. Too many authors I've read, write a book filled with sex, and forget about making the book intriguing. I love the way Mr. Hairston explored different relationships other than traditional ones. I've read all of his novels and I've loved them all. I suggest that any reader reads all of his selections. You will not be sorry. Alex I'm anxiously awaiting your next title. Keep up the good work!!

Wow! This one was out in left field for me!

Published by Thriftbooks.com User , 13 years ago
Damn! It was an interesting story! I just couldn't get with the threesome relationship! The sex scenes were really HOT! This was a very sexy, sensual and romantic book; but, I wasn't feeling Joel when he was supposely in love with both Erin and Kenya and they publicly displayed their affection in public and in front of his mother! That was crazy! I wish the end of the story was not so rushed with Joel, Renee, Erin and Kenya. We needed more details in the way the story ended! Overall it was a really good read. This was my first book by this author and I will definitely read more.

Published by Thriftbooks.com User , 13 years ago
"For Lovers Only" the story captures your attention from the beginning. After reading the first chapter you can easily fall in love with the main character Joel (especially if you are woman). Joel is not your average man. He is Mr. Perfect man that every woman hopes to have. After his hart was broken by his girlfriend, he meets a beautiful girl name Erin and her best friend Kenya. Both women find Joel irresistible, agreed to share him and tried to have a committed threesome relationship. Of course their unique relationship didn't set well with everybody. Occasionally they found themselves defending who they are to family, friends, and strangers. The story will take you through a lot of mix emotions and keep you on your toes. You find a lot of interesting and unforgettable characters in this book. Regardless of their parts, the writer gave each person a personality that you can identify with or reminds you of someone you know in real life. The end is unpredictable, you will never guess whose arms Joel ends up on, which makes the story extra special. Overall, for Lovers only is a very sexy, unpredictable, bluntly honest, well written, visible, and emotional story. I would like to suggest to everyone to pick up this book because it is a MUST READ! story.

Published by Thriftbooks.com User , 13 years ago
Opposites attract or so Joel thought when he was in a relationship with Renee. However, when she called out another man's name in the heat of passion, he knew it was the beginning of the end. Joel was devastated by the demise of his two-year relationship, but not for long. He soon meets his new neighbor, Erin, and the attraction is so strong from their initial encounter, they are inseparable. Erin is so excited she shares all her feelings with her best friend, Kenya. Once Kenya meets Joel, she proposes the idea of them sharing Joel. Now, the two friends will just have to get him to agree to a polyamorous relationship. FOR LOVERS ONLY is an erotic tale with a bit of a twist - three people knowingly entering into a committed relationship. The friends grow in love as they work their way through this new and unique lifestyle. While they are basking in the glow of love, they also have to deal with crazed ex-lovers, dysfunctional family members and feelings of jealousy among the trio. For a fun, sensual book with an added flair, this is one to get. Reviewed by Paula Henderson of The RAWSISTAZ(tm) Reviewers

Published by Thriftbooks.com User , 13 years ago
This book should have a warning on it = HOT!!! Joel is a brotha with some issues about relationships and cheating! The women in this book are amazing: Kenya and Erin are confident and successful - Renee knows she has some fixin to do! A page turner and DEFINITELY a HOT Topic for any book club! I would write more - but I DO NOT want to give the plot away!
Copyright © 2022 Thriftbooks.com Terms of Use | Privacy Policy | Do Not Sell My Personal Information | Accessibility Statement
ThriftBooks® and the ThriftBooks® logo are registered trademarks of Thrift Books Global, LLC