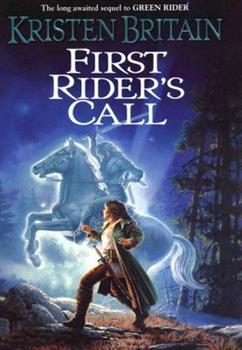 (Book #2 in the Green Rider Series)

Karigan G'Ladheon was a Green Rider, one of the King of Sacoridia's magical messangers. With evil forces at large in the kingdom and the messenger service depleted and weakened, can Karigan reach through the veils of time to get help from the First Rider, a woman who has been dead for a thousand years?

Published by Thriftbooks.com User , 16 years ago
Why is it that people decide a book must be bad if it isn't 100% original? Yes, this has a lot of themes that have been done before, but that doesn't make it bad. In fact, this is one of the best incarnations I've read of old themes in a long time. The Journal entires of Hadriax El Fex do a wonderful job of weaving the story together. That sort of history can be difficult to keep track of; distant, but not so distant that everything in the world would have changed. Ms. Britain does a beautiful job of it, though. The names of the Clans remain similiar to what they were a thousand years ago, changing just enough to represent the passing of time. Even the First Rider's name is slightly different, as though the correct dialect has been lost over time. Such attention to detail shows an author who loves and takes pride in her craft. Despite some griping about the story being slow, it moves at an incredibly fast pace in actuality. People must remember that even in times of war there are talks for peace, breaks to sleep, to eat, to regroup even. It's unrealistic to think that every moment of life is fast paced action, and it's that level of reality that makes this story what it is. The people do things that are NORMAL, which helps the reader to relate. This is a concept so many authors fail to grasp. There's also been comparison to the Valdemar series, but actually, those similiarities are surface at best. The Green Riders don't have in born magical ablities...they recieve them from their brooches, and each Rider to inherit that brooch has that talent. The horses are smart, yes, but they can't speak like Companions, they don't choose their Riders, and there is only one small implication that they were past Riders, and not a strong impication at that. Especially when you consider that most of the past Riders are ghosts that appear in this story. Also, I found Karigan to be so much more realistic than say, Talia or Alberich, on the whole. Talia lives on the border of a country that barely pays attention to what happens to her. Alberich is in the country of the enemy. But suddenly they have an inexplicable willingness to throw themselves in front of an arrow for their country. Karigan's reaction is much more human and much more realistic. And really...I have no problem with the little love thing going on between Karigan and Zachary. For one thing, nothing has come of it. For another, I thought she was gonna fall in love with one of those damn Eletions. Now THAT would have pissed me off. Nothing has been done to death more than mortals falling in love with immortals and nothing is stupider or makes less sense. Yes, there are a few small flaws, but those don't take away from the story. It's a sad world we're in, when people can't just relax and enjoy something. One thing I will say, and I mean no disrespect, but Ms. Britain should NEVER, EVER consider a career as a lyricist. :D

Haunted by a Legend

Published by Thriftbooks.com User , 18 years ago
First Rider's Call is the second novel in the Green Rider series, following Green Rider. In the previous volume, Karigan G'ladheon has forcibly separated Prince Amilton from Shawdell the Eletian, set loose the wild magic, convinced Jendara to change sides, and thus restored King Zachary to his throne. She also breaks the black arrows that killed F'ryan and frees his spirit to pass on. Although offered a position in the messenger service, she decides to return to her family and become a merchant.In this novel, Karigan is having dreams sent by Lil Ambriodhe, the legendary First Captain of the Green Riders. Other dangers loom and the Green Riders need Karigan back in the saddle. Karigan resists, for she enjoys working with her family and is not eager to return to the terrifying experiences of her past service. One morning, however, Karigan rides out to Sacor City in her nightgown.A year later, Karigan is scouting for a diplomatic party to the Eletians, those mysterious people to the north. The party encamps in a clearing occupied by a large rock surrounding by wardstones. Ty and Karigan argue against the location, but are overruled. Of course, the party is attacked by groundmites, lead by a walking dead man, and then the large rock emits a storm of energy.The survivors of the diplomatic party are saved by the Eletians, who single out Karigan for a briefing on the situation. It seems that the unfortunate encampment has released a wraith who was a favored servant of Morhnavon the Black. Other wards are also failing, particularly in the D'Yer Wall. A break therein is allowing various of Morhnavon's monsters to escape their confinement.Thus begins another story of suspence and sudden dangers. Karigan learns something important about her ancestors that has been forgotten for many centuries. Moreover, she finds her ability to penetrate illusion becoming stronger ... and more necessary.Highly recommended for Britain fans and for anyone else who enjoys tales of ancient and corrupt magic being resisted by young warriors with talents of their own.

Published by Thriftbooks.com User , 18 years ago
I have waited for this book for years and I am soooo glad it's finally out!!! This is another great work, just like Kristen Britain's first novel. Most of the old friends are back, and some new ones. When I picked this up it seemed like I had never left the world of Sacoridia and its amazing green riders. This book does leave a lot of ends untied, but that will make the next one so much the better. I just sincerely hope it's not another couple of years, I don't know how I'll take the wait! I really enjoyed this book and Karigan was as wonderful as ever. This book delves more into the past and is so incredibly interesting. So in short, this is another great read by Kristen Britain and it will leave you awaiting the next one with great anticipation. So if you loved Green Rider or just love science fiction fantasy books with superb heriones you must read this book!

Published by Thriftbooks.com User , 18 years ago
If you read Green Rider, and were anxiously sitting by your computer waiting for the Daw newsletter to tell you exactly when Kristen's next book was coming out, I can guarantee that First Rider's Call will go so far beyond what you were expecting that it will seem that mere moments have went by rather than years. A good sequel - no, this was a PHENOMENAL sequel. Riviting as a game of intrigue, fast paced, yet subtle - Kristen manages to weave a tale drastically different from Green Rider, but filled with everything a snippet hound could possibly want:Magic? Plenty - the same fascinating Green Rider Magic from the first book, with a few kinks and bumps along the way (For the Characters that is!), and some completely new and exciting twists to keep you jumping and flipping through the pages with wild abandon :)Magical Creatures? Eletians, Ghosts, a few.... well, I don't want to spoil it for you! And as for Karigan, she is a little older, and finally accepting of her role as a green rider, but wait until you see how she gets there! King Zachary, Alton, Captain Mapstone... all are much stonger and more developed in the sequel, and the twisting subplots leave no one alone for long. First Rider's Call is a more complex novel than Green Rider, but it is more a matter of Sacoridia gaining depth as it grows on you - The scenery is so clear in your mind, it is as if you were the one riding through the woods, or standing at the edge of a lake...the characters have depth, feeling, motivations, humour, and above all, a humanity that links you to their tale and won't let you go until it drops you at the last page...stretching out for the third book which is waiting, just around the corner!Now, if only I had a time machine and could go forward a year or two to get it!

Published by Thriftbooks.com User , 18 years ago
Kristen Britain's "First Rider's Call" is a sequel to "Green Rider", her outstanding debut novel. Reading "Green Rider" will certainly help you fully appreciate this wonderful second effort. In FRC, Karigan G'ladheon has finally given in to destiny and joined the Green Riders, a messenger/spy service. While on a delegation to the Eletian kingdom, Karigan and her companions are attacked by a mysterious spirit. With the delegation decimated, Karigan returns to Sacor City to report on the wraith and its peculiar focus on her personally. Magical accidents and attacks are soon occuring all over the kingdom and Green Rider magic itself begins to malfunction. And then things really start to go wrong when Captain Mapstone locks herself in her room. This is a truly enjoyable fantasy adventure, with strong characters and realistic solutions to problems (both magical and personal). Karigan's romantic trials are dealt with more fully in this novel, although readers are left with a cruel cliffhangers on several essential matters. These cliffhangers (including one in particular involving a certain king!) and the absence of the Berry sisters are my only real complaints about the novel, and I'm sure that will be solved in the next book. Buy this!
Copyright © 2020 Thriftbooks.com Terms of Use | Privacy Policy | Do Not Sell My Personal Information | Accessibility Statement
ThriftBooks® and the ThriftBooks® logo are registered trademarks of Thrift Books Global, LLC