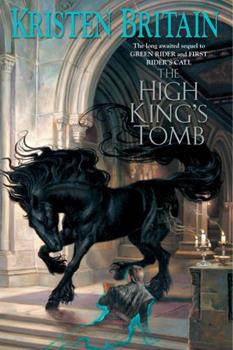 (Book #3 in the Green Rider Series)

Published by Thriftbooks.com User , 13 years ago
The High King's Tomb (2007) is the third fantasy novel in the Green Rider series, following First Rider's Call. In the previous volume, Karigan G'ladheon, with the help of First Rider Lil Ambrioth, carried the spirit of Mornhavon the Black to somewhere in the future. Alton D'Yer is fooled by a semblance of Karigan into changing the song of the Wall guardians, thereby causing a breach in the wall. This breach allows groundmites and magical creatures to escape from the enclosure. Dale is severely injured by an avian monstrosity and others are killed by escaping creatures. Mara burns down the Rider barracks defending herself from an attacking wraith. In this novel, Karigan is acting Chief Rider while Mara is recovering from her burns. She finds herself doing the types of tasks that she had hated as a merchant child, such as correcting the Rider books. She is also trying to help Ben -- the Rider healer -- overcome his fear of horses. Karigan is frustrated by the machinations of her father to convince her to return to the family business. The latest is Stevic's conspiracy with his chief rival -- Bernardo Coyle of Rhovanny -- to unite the two families in marriage. She is presented with the gift of a stunningly beautiful blue dress and accessories, including a whalebone corset. The Raven Mask had been a gentleman thief in prior generations. While Karigan is being escorted through the Sacor City War Museum by Braymer Coyle, another Black Mask suddenly appears and steals a priceless manuscript from the days of the Long War. Naturally, Karigan takes a sword off the wall and confronts the thief while in full dress, including corset, skirts and hairdo. Alton has been barred from entering the watch towers in the D'Yer Wall. The spirit of his cousin Pendric is still inciting the guardian spirits against him. Meanwhile, the wall is crumbling from within. Dale is tired of the Rider mending hall and asks to be assigned to the wall as Alton's assistant. Since Alton is the only Rider who cannot enter the tower, Dale acts as his messenger. She goes back and forth, conveying Alton's questions to the projection of the great magician Merdigen and returning with the responses. Merdigen had been a very powerful magician, but he and his order had refused to use their powers to fight against Mornhavon the Black and the invading Arcosians. They did agree to protect the Sacoridians after the end of the war, so he and the other survivors of his order had been encased within the towers. Their projections act as interfaces between the living Riders and the wall guardians. Eventually, Dale convinces Merdigan to try restoring or containing the damage to the wall. He becomes worried enough to invite his fellow projections to join him. When some are found to be unreachable, he leaves his tower and go across the spirit world to contact them. In this story, Second Empire refugees from Sacor City are encamped on Hawk Hill in the Teligmar Hills of Mirwell

Published by Thriftbooks.com User , 14 years ago
The first time I picked up her fist book of this series, I got into the book right away. When I finished, I couldn't wait for the second one to come out. When I finished that one, it was like thousands of years before finally getting to read this new one. I love her books. They are very well written. Everytime you read you can imagine what the scene's like in your mind and follows along with her stories. The books are exciting and fun to read. Its so much humor in there that it makes it worth reading. I'd recommend this to anyone that likes fantasy books, adventures and magical stories. I can guarentee that it will be fast and easy and fun to read. I'd give the authour 5 stars over and over again if I could. It will be painful and I will be impatience again waiting for the next book to come out. At first, I was a little disapointed when I first started reading the third book because I thought "It's a bit boring on how she started this book." But as I started reading, I couldn't stopped. It was only the fist chapter that was a bit confusing. I grew to like Karigan a bit more each times I read about her. She was an exciting character from the start. I thought this was going to be the last book of her siries but I am happy to know that it is not so. However, I am a bit sad that Karigan and Zachary is not together yet. I was so curious what would happen to his queen to be that I started reading. Too bad she's in the middle of a lover's quarrel and she's not understanding. I think that Kristan Britain can still improve. Her stories are very well developed that they will be even better in her next book. I look forward to it.

Published by Thriftbooks.com User , 14 years ago
It is such a joy to see an author grow in talent. From a simple story idea in The Green Rider the series has so many twist in turns in this novel that I know I will reread it many times and gain new insight. Karigan grows and matures to an incredible degree through relationships and adventure. There are so many avenues to explore that I can not wait for the next book from this incredible author.

Please don't make us wait too long for the next one.

Published by Thriftbooks.com User , 14 years ago
Kristen Britain has certainly delivered with the latest book of the Green Rider series. While the 1st 2 books were stand alone novels this one leaves the reader with a lot of unanswered questions & eagerly awaiting the next installment (I do hope it will not take as long as this one did to come out). The author has introduced some new characters, & if she so chooses, gives room for wider expansion of story lines for the future. I was very impressed with the development of her characters & how she doesn't leave the reader sitting too long without something happening. The story flows with a natural rhythm. Despite the questions she leaves us with at the end it is truly an enjoyable read. I can hardly wait until the next book comes out.

Published by Thriftbooks.com User , 14 years ago
Yes yes, I know...everyone (including myself) is upset about the horribly LONG wait between the 2nd and 3rd book. However..I'm crossing my fingers that the 4th one will be done sooner! As for THKT, it was amazing. I love Kristen Britains Green Rider series! Karigan has finally ACCEPTED and EMBRACED her role as a green rider, and in this book, takes on the position of a trainer for one of the newest Riders. While the long errand was supposed to remain boring and uneventful...nothing Karigan does seems to turn out that way. There WAS a certain level of downtime as I read someone mention in another post, and I think that the character development in these sections is excellent. Also,as Capt. Mapstone has figured out the relationship between Karigan and King Zachary, she is determined to keep them apart for as long as possible, so there isnt a whole lot of interaction between them in this book. *sniff* This book mainly focuses on the 2nd Empire and the steps they are taking to achieve their goals. There is a wicked magic user in their midst known as Grandmother who stirs up some nasty concoctions and tortures a few people. Karigan seems to skirt along the outside of things until the end, and does quite a bit of traveling, even managing to run into her old nemesis Timas Mirwell. The Berry Sisters make another appearance, and King Zachary's estranged cousin makes quite a interesting stir throughout. All in all, I cannot WAIT until the next book. I loved how this one worked out and I will be waiting impatiently for the 4th one!!
Copyright © 2020 Thriftbooks.com Terms of Use | Privacy Policy | Do Not Sell My Personal Information | Accessibility Statement
ThriftBooks® and the ThriftBooks® logo are registered trademarks of Thrift Books Global, LLC