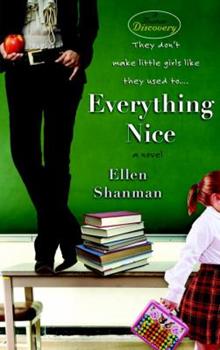 In a smart, sexy, wickedly funny new novel, the acclaimed author of Right Before Your Eyes introduces an unforgettable and irresistibly real heroine: Michaela"Mike" Edwards, a woman who is forced to reinvent herself-- and discovers that the biggest risk is not taking one at all.... Fiercely independent and seriously lacking in social graces, Mike Edwards doesn't do sugar and spice. Instead she writes great copy and stays above the fray--until mishandled...

Published by Thriftbooks.com User , 13 years ago
Sure, this book has all the elements of a typical chick-lit novel, but Ellen Shanman's terrific writing sets it apart from the rest. Her sharp and often zany wit, well-crafted characters and nuanced storyline (teaching little girls the right way to deal with homeless people and construction workers? Amazing!) keep the reader hooked on Mike's roller-coaster ride all the way to the happy ending. Great book!

Published by Thriftbooks.com User , 13 years ago
Michaela or "Mike" as she has been renamed by her physician dad does not remember her mother who was killed in a freak accident and has been raised by her dad for 27 years without the loving touch of a mother - and it shows. Mike has careened through life never really learning to show her feelings and in fact is completely unschooled in having any emotion thanks to her well meaning but totally unequipped dad. Mike has no girlfriends, no loving grandparents, no mother figure, and has lost her boyfriend when the story opens. Suddenly she loses the only thing she has - her career - and her world turns upside down. Mike does have one good guy friend who sticks with her even though she constantly pushes him away. Since her father decides to remarry after 27 years, Mike is forced to learn about herself through the family that she inherits from the new marriage and from the seventh grade girls that she begins to teach "life skills" and who in turn teach Mike about life. All the characters are really well developed and the story is just so well written. I loved it!

A great book and a special price too!!

Published by Thriftbooks.com User , 13 years ago
Michaela (Mike) is a wonderful character! She was raised by a standoffish father after her mother died when she was three. He didn't know how to deal with his own grief much less his daughter's so Mike has a personality with a few flaws. She totally lacks people skills and is afraid to get emotionally involved with anyone. She has a habit of saying whatever she thinks and doesn't have a lot of insight into what other people are feeling. Her life has hit a major glitch. She's been fired from her job, can't afford her apartment so is forced to move in with her father and (surprise!) his soon to be bride. And to put the icing on the cake, her ex-boyfriend is using her as the brunt of his jokes in comedy clubs around New York. Can it get any worse? Yes! While interviewing at a charter school for a public relations job, she finds herself instead filling in for a teacher on sick leave teaching a life skills course to 11 seventh graders! The first lesson is supposed to be making granola which she quickly changes to how to have a conversation without hand raising. As she sees it "Life Skills doesn't have to be a useless period for tatting and darning. What if instead she could teach them all those vital tidbits that no one had ever taught her? The things she'd had to learn the hard way. She could genuinely equip them for life, spare them some of the knocks she'd taken, and perhaps fit the world with eleven more sensible, palatable women that she herself wouldn't mind being in a room with. This could be a good thing." This includes recognizing obnoxious behavior on subways, basic self-defense, how to spot scams, body image and why they should never base anything on how they looked. She would assign them to do one thing that scared them so they could learn never to be afraid of anything. I enjoyed all of the characters in this book. The 11 little girls were marvelous and their interactions with Mike so very well written. Cheryl, another teacher who floats around in many scarves and takes a big interest in Mike's Australian friend, Gunther. Mike's dad and Deja (fiancee) and her daughters who give Mike ready made sisters whether she wants them or not. My review is longer than normal but I totally recommend this book and hope that I've piqued your interest. It's a keeper!

Published by Thriftbooks.com User , 14 years ago
I normally don't read "chick lit" books. Not because I don't think there are some great reads out there, but as a dumb guy, I usually don't get them... at all. "Everything Nice" was different. The main character Michaela is engaging. Although most of can't relate to her (tall, beautiful, confident and smart) - her journey is one we all must embark on: finding ourselves. And the author uses clever devices to move that journey along. There was plenty of humor and witty banter to keep me laughing and enough heart and truth to keep me reading.

Published by Thriftbooks.com User , 14 years ago
I really enjoyed this book. The main character is snarky and witty and emotionally stunted. She grows and learns to love and be loved. A great tribute to teachers.
Trustpilot
Copyright © 2022 Thriftbooks.com Terms of Use | Privacy Policy | Do Not Sell or Share My Personal Information | Accessibility Statement
ThriftBooks® and the ThriftBooks® logo are registered trademarks of Thrift Books Global, LLC