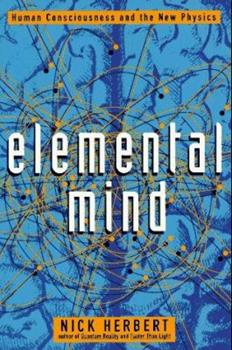 Explores the place of consciousness in nature, drawing on new ideas in physics to argue that consciousness is a fundamental process of nature like light and electricity, rather than something that... This description may be from another edition of this product.

Good Summary but Not Enough

Published by Thriftbooks.com User , 14 years ago
Nick Herbert certainly knows his stuff. He does a very good job of explaining the current models of quantum physics and the problem of conciousness and observation that occur in these models. It is a fascinating and difficult topic, which people need to understand as best as it can be understood. Where I quarrel with Nick Herbert is that he is too even-handed. He presents all of the alternatives, and then frustratingly enough -- doesn't pick one. Yes, it's wonderful to know all the thoughts on the subject, but as the author I rather wanted him to give his best guess on what was really going on. Well, worth reading, but you just don't get a strong conclusion at the end.

An Interesting Look at Mind/Body

Published by Thriftbooks.com User , 23 years ago
Nick Herbert's Elemental Mind makes an interesting supposition -- that the mind, or consciousness, is a force that interacts with the world, like gravity or electromagnetism. He makes a pretty good argument that ESP and Telekinesis would prove that this is so; unfortunately, his examples (the typewriter open to the quantum void and the branching photon experiment) don't seem to show any evidence that the greater supposition is correct. The book is very interesting, though, and leads one into all manner of speculation about how peculiar the quantum universe and though actually are. A well written, entertaining, and informative book.

An interesting view of quantum theory and mind

Published by Thriftbooks.com User , 23 years ago
When read along with Herbert's previous book, Quantum Reality, this text makes a good case for invoking quantum physics to explain the relation of mind and matter and also in explaining some of the more convincing experiments in parapsychology (effects of consciousness on random number generators) which suggest a non-locality of mind. If more people took such ideas seriously and devoted time and research to them, understanding of the mind and a true theory of consciousness might be forthcoming.
Trustpilot
Copyright © 2022 Thriftbooks.com Terms of Use | Privacy Policy | Do Not Sell or Share My Personal Information | Accessibility Statement
ThriftBooks® and the ThriftBooks® logo are registered trademarks of Thrift Books Global, LLC