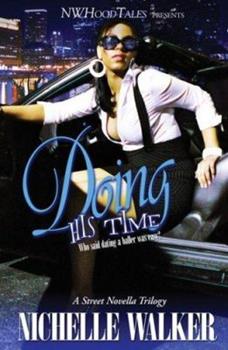 Doing His Time (Who Said Dating A Baller Was Easy?)

Every little girl dreams of meeting Prince Charming and living happily ever-after. But in the hood the Prince Charming are ballers and we dream of living happily ever Rich Now imagine being swept off your feet and upgraded from a nobody into a ghetto superstar. Imagine a life of nothing but the best; clothes, jewels, whips and homes. Just picture your life as baller's bit*h Ask yourself how much are you willing to sacrifice to be the hottest chick...

Published by Thriftbooks.com User , 12 years ago
Emerald and her little sister Sissy ,were raised by their grandmother. Money was tight, but they got by. While out on the town one night after stealing Grandma's car Emerald meets Dollar. Dollar was one of Chicago's biggest dope dealer and Emerald was dreamy eyed over him. Emerald was wooed and sweet talked by Dollar and eventually quit high school and devoted all her her young life to Dollar. Emerald thought that she had it made in the shade. She soons finds out that Dollar is only about getting that dollar and doesn't care anything about her. This was a very well written page turner. You will love this book!

OH YES SHE DID!

Published by Thriftbooks.com User , 14 years ago
In DOING HIS TIME, written by debut author Nichelle Walker, we're in Chicago , where we meet Emerald, a frantic sixteen year old celebrating her birthday. While parking lot pimping with her girls, she meets and greets Dollar, a bona fide hustler, who she is looking forward to getting to know. As Dollar and Emerald get more acquainted, Emerald loses her modesty and begins stepping on and over people as she rises to the top. Be careful who you step on as you may have to come down that same unpaved road. Emerald learns valuable lessons about love and loyalty while DOING HIS TIME. I for one cannot wait for part two. Nichelle is definitely an author on the rise and this is a book that all book junkies will enjoy. Reviewed by: Peaches

Published by Thriftbooks.com User , 14 years ago
Okay, so I get that email. Ya'll know what I'm talking about. The email saying, "check this book out...it's the bomb...you're gonna love it...blah, blah, blah..." The author herself promises that you won't be let down. Where have I heard that before? So I'm thinking, yeah okay. Then someone I know tells me they absolutely loved it. Then another. So by this point I've got the book ready to blast if it ain't hitting on nothing. Before getting a chance to read it though, I end up meeting the author at a literary event. She's sweet, a little quiet. So I'm thinking, what this chick know about being a baller's b*tch? Right about now, I can't wait to read this book. One evening, nothing but junk on TV, I crack it open... Dollar, a fine, tall, sexy, paid hustler, is that n*gga! And that n*gga belongs to Emerald, a real ride or die chick that has absolutely no problem handling any females that comes between her and her's. There's nothing Emerald won't do or to no limit she won't go to prove her love for Dollar. But how far is too far? I'm happy to say that Nichelle didn't let a sista down. Sometimes it only takes a little to tell a lot, as is the case with DOING HIS TIME. At a little under 200 pages, Nichelle Walker spins a tale of life, love, betrayal and more. In her first novel, Walker treats us to a story set on the unforgiving streets of Chicago. She created a fascinating and appealing protagonist in Emerald. She's naïve, young and dumb, yet sassy and tough. You're immediately drawn into her life, curious as to what she'll do next and how things will pan out. DOING HIS TIME held me until the end. I read it in one sitting. It proves to be a real page-turner and I can't wait for book two, Money Over N*ggas. Thanks to Nichelle Walker, we have a fresh new voice in urban lit and I welcome her. 4.5

Published by Thriftbooks.com User , 14 years ago
"Doing His Time" was a great read. This new author has skills. I will continue to read more of her books in the future. I also met her live in Chicago, IL at the Awards Ceremony Saturday May 19, 2007. Keep up the good work! Emerald was a very young "dummy". She got exactly what she wanted - TROUBLE! She never finished school and let a man rule her world - Dollar. Dollar was a well known drug dealer who played the game. He swept Emarld off her feet and then used her. Will she ever learn? The book has an odd twisted, please get ready! Waiting on the sequel......

WHO CAN YOU TRUST?

Published by Thriftbooks.com User , 14 years ago
EMARLD WAS THAT CHICK YOU WANT TO BE. SHE WAS GOOD LOOKING AND HAD A BODY TO KILL THAT CAUGHT DOLLAS EYE A WHILE KNOW DRUG LORD. SHE FALLS IN LOVE THINK THAT EVERYTHING IS PEACHES AND CREAM BUT THAT IS ALL GAME ON DOLLAS PART. HE CLAIM TO LOVE HER BUT HE LOVES THE STREET MORE.HE WILL DO AND SAY ANYTHING TO SAVE HIS OWN LIFE. BUT THE STORY THICKEN WHEN EMARLD SISTER WINDS UP DOING HER DIRTY AND THIS CHANGES EMARLD INTO A PERSON YOU WILL NEVER WANT TO MEET THE ONLY THING ON HER MIND IS GOING OUT ON REVENGE FOR EVERY PERSON THAT DID HER WRONG.
Trustpilot
Copyright © 2022 Thriftbooks.com Terms of Use | Privacy Policy | Do Not Sell My Personal Information | Accessibility Statement
ThriftBooks® and the ThriftBooks® logo are registered trademarks of Thrift Books Global, LLC