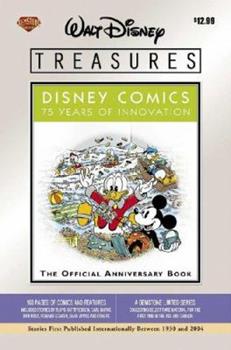 Published by Thriftbooks.com User , 15 years ago
First of all, I did not expect the book to be so small...but then I figured it was made to be the size of an actual comic book page, so I was able to live with that. The contents of the book are excellent, and while I would have appreciated more pages dedicated to discussing the history of the Disney comics, the selections, though random, do provide a nice overall essay of all the different characters that became popular in the comic book format.

Published by Thriftbooks.com User , 15 years ago
Comics were made to sell for 5 or 10 cents, but the modern comic, even full of distracting ads, runs two or three dollars. Gladstone/ Another Rainbow Publishing came up with a great idea. In the '90s they presented Carl Barks' duck comics in graphic novel format, which they called comic albums, for between six and ten dollars. Absolutely great, what? You bet, until in one of a string of bloomers the proprietary Disney Company snatched back the license and made a botched effort at doing its own comics (this sort of thing was legion at that time and stirred Roy Disney to make a website called Save Disney). Now for the good news: the entire Gladstone run is still available, and some have even been combined into larger albums including two to four of the original oversize full-color comic albums. "Disney Treasures", of course, refers to the lavishly packaged metal-boxed DVD sets of cartoons and other retro Disney shows. It's a brainstorm to lay this book out in that format and it holds up quite well, since this brief overview samples the American and European comics from the 1930s to the present. David Gerstein contributes an invaluable two page essay for this book in which the comics are otherwise presented without comment. He alludes, ever so briefly, to the '50s book, Seduction of the Innocents, which started a crusade against comic books on the grounds that they were too violent and graphic in the gory sense. The result of that was the Comics Code, which was on every Gold Key and thus Disney comic. Dell had its own version of the code, and assured parents that "Dell Comics are Good Comics," thus assuring free access for kids. Gerstein repeats the old saw that until then comics weren't for kids, and that graphic novels have brought back the pre-code days with a vengeance. I merely retort that the very idea of comics in this era fashioned them for youth and that this innocence brought out the best in Disney and other artists and made Gold Key comics the good part of being sick, since you'd inevitably get the latest adventures of the Junior Woodchucks or Mickey VS the Phantom Blot. When the license went from Dell to Western Publishing the printing quality declined, but Gladstone later lifted it to a level of archival quality with its beautiful volumes. The general view is that in terms of the silver screen cartoon shorts, Donald was a much more interesting protagonist than Mickey, but in the comics, I think fans of Carl Barks' duck comics (translated well to TV in DuckTales) will enjoy discovering Floyd Gottfredson's Mickey Mouse. So what is the relation of Gemstone to Gladstone? Gerstein assures me that it's the same crew. Whatever the reason for the name change, Steve Geppi, a close friend of the late Bruce Hamilton, founder of Gladstone, is now carrying the torch. The many great cartoons now available on DVD make this a new Golden Age for animation, and more good news: Gladstone/ Gemstone are now leading a comics revival.

Published by Thriftbooks.com User , 15 years ago
With 75 years and probably thousands of stories to choose from, it couldn't have been easy to select the stories that made it into this volume. The folks at Gemstone did an admirable job, though, with a wonderful sampling of rarely reprinted comics from the US and Disney's foreign publishers -- some being reprinted in English for the first time. Most of the legendary Disney comic creators are represented here, from Floyd Gottfredson to William Van Horn to Don Rosa to the immortal Carl Barks. Even Walt Kelly has a short story in this volume. In addition to a great sampling of creators, this book also has a good sampling of characters. You get the expected stories of Mickey Mouse, Donald Duck, Uncle Scrooge and Goofy, but you also see Lil' Bad Wolf, Brer Rabbit, Bucky Bug, Gremlins, Fethry Duck and Launchpad McQuack taking the helm of their own adventures. Gemstone has replicated the DVD format, from the cover (including nice art by Don Rosa) to essays by David Gerstein (taking the Leonard Maltin role for the book). The only real weakness to this book is that the stories seem to have been selected solely for their rarity, with no real common theme or thread to hold the book together. Hopefully future volumes in the series will address this issue. As it is, this is a fine sampling, one that any Disney comic fan will enjoy.

Published by Thriftbooks.com User , 15 years ago
This is a very interesting sampling of what Disney comics have produced over the years. It contains a collection of Disney comics by various creators, from various countries, featuring a variety of Disney characters, spanning the years 1930 to 2004. It's interesting to watch what has changed and what has stayed the same over the years in these comics. It's especially wonderful to have some of the older comics collected here. Hopefully this will just be the first of many such collections.
Trustpilot
Copyright © 2022 Thriftbooks.com Terms of Use | Privacy Policy | Do Not Sell My Personal Information | Accessibility Statement
ThriftBooks® and the ThriftBooks® logo are registered trademarks of Thrift Books Global, LLC