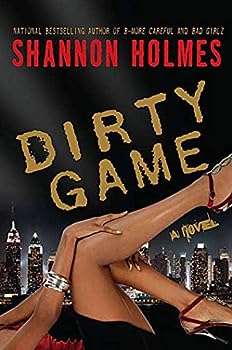 This description may be from another edition of this product. Dirty Game is the blazing new novel from the #1 Essence bestselling author and undisputed "king" of urban lit, Shannon Holmes. Kenny "Ken-Ken" Greene left his days as a hustler behind him when his...

Published by Thriftbooks.com User , 14 years ago
I really enjoyed Dirty Game. It kept my interest and I was couldn't wait to see what was happening next with Destiny Greene's life. Hopefully it'll be a part two. Keep 'em coming Mr. Holmes!!

Published by Thriftbooks.com User , 14 years ago
This book was really good, I honestly think that the reviews were way over the top it almost caused me not to get the book but im glad I did. These people are haters I enjoyed every bit of this book. But I will say this the ending is a little anti-climatic. But that does not make the book any less good. Go get it you won't be disapointed. Destiny was a trip, I felt for her at times, she had me cracking up at times. And Rome and Makeba were sorry.

Published by Thriftbooks.com User , 14 years ago
The first two chapters started out kinda slow for me, but after that I was hooked! Dirty Game is a book about a girl named Destiny who death just seem to won't leave alone. Destiny never had a woman to really mold and shape her, and teach her how to be a woman because her mom died from gun shot wounds the day Destiny was born. Ken-Ken, Destiny's dad, tried his best raising his daughter, but after he dies Destiny really just turns to a life of crime. Destiny is betrayed by the two peolpe closest to her; her boyfriend and her best-friend in the worst way imaginable. You must read this book to find out all the drama, problems, and mis-fortune that Destiny endures.

The Road To Hell Is Paved With Good Intentions

Published by Thriftbooks.com User , 14 years ago
Destiny Greene has hustling in her blood. She was born to a modern day Bonnie and Clyde, Maria and Ken Ken, whose capers come to a screeching halt when Maria is shot and killed while seven months pregnant with Destiny. This is the dramatic opening to Shannon Holmes fourth urban fiction offering, aptly titled Dirty Game. Ken Ken immediately leaves the game alone and becomes a taxi driver, determined to raise Destiny on the straight and narrow and save her from the fate that befell her mother. But the streets are calling and Destiny has to answer. At first her intentions are to simply keep herself laced, but then the hustles become a necessary evil to keep their heads above water after her father is shot and paralyzed during a botched robbery attempt. Ken Ken is deeply disappointed in Destiny, but knows he is powerless to stop her, especially after a ruthless street hustler, Rome works his way into Destiny's mind and then her bed. As she moves from small time hustles with Rome to white collar scams, a series of unfortunate events threaten to bury her alive in the game. Will Destiny meet the same fate as her mother or will she learn from her mistakes before it is too late? Like most urban fiction stories, this was a quick, dramatic read that held my attention until the last page. Destiny was a compelling character who saw a lot of sorrow early in life and had to grow up too quickly. Although she was sassy and street smart beyond her years, I still found myself somewhat sympathetic to her plight. At times, I wanted to insert myself into the story and personally guide her in a different direction. On the other hand, Rome is the character you will love to hate. Although, he may be nice to look at, with a body custom built at the Penitentiary Gym, you curse the day that he laid eyes on Destiny. This is no ghetto love story! Overall, this book was well-written, although I could have done without the Ebonics. I suppose it added to the authenticity of the characters and Holmes even addresses it through a proper English-speaking character, which I thought was clever. Although, there was a lot of foreboding and foreshadowing, I truly did not know how Destiny was going to fare. The ending surprised me and definitely lends itself to a sequel, which I would read. Reviewed by Danielle H. APOOO BookClub

Published by Thriftbooks.com User , 14 years ago
Kenny "Ken-Ken" Greene has always been a hustler. He has to give up the streets when his wife is killed during a con gone bad, leaving him to raise his baby daughter Destiny alone. Years later, Kenny is now a cab driver trying to do the best he can to provide for his daughter. But when a tragic accident leaves Kenny unable to work, Destiny turns to the streets to put food on the table. Mentored by her lover Rome, Destiny soon becomes a formidable hustler in her own right with her best friend Makeba by her side. Makeba has always walked in Destiny's shadow but now she wants to shine on her own. Will Destiny and Makeba's relationship suffer? Destiny will soon learn that in the dangerous world of hustling, no one can be trusted and nothing is the way it seems. Dirty Game is a phenomenal novel by Shannon Holmes. Holmes gives readers a bird's eye view of the harsh life on the streets. This author showed great creativity in illustrating the difficulty of a single father raising a daughter, which is refreshing. You will feel the frustration of Kenny as he tries to make ends meet and keep his daughter off the streets. You will also feel the emptiness of Destiny from not having a mother around to show her how to be a woman. Readers will find that there are many timely issues that are incorporated into this novel such as self-love, single parenthood, and ultimate betrayal. Dirty Game is entertaining and thought-provoking. Shannon Holmes has penned a satisfying novel that was well worth the wait. Hopefully, we won't have to wait too long for his next release. Reviewed by Radiah Hubbert of Urban Reviews
Copyright © 2020 Thriftbooks.com Terms of Use | Privacy Policy | Do Not Sell My Personal Information | Accessibility Statement
ThriftBooks® and the ThriftBooks® logo are registered trademarks of Thrift Books Global, LLC