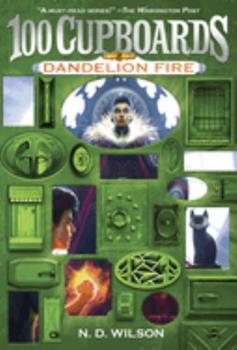 The bestselling and highly acclaimed 100 Cupboards series continues with its action-packed second book, Dandelion Fire. Perfect for readers who love Percy Jackson, the Unwanteds, and Beyonders Henry has discovered that the 100 cupboard doors hidden behind his bedroom wall are actually portals to other worlds. Now he must go through the cupboards to find the truth about where he's from and who his real parents are. Along the way, Henry is suddenly...

Published by Lydia.M.T , 2 years ago
"Dandelion Fire"is my favorite book!! If you read the first book and liked it you will love this one.

Published by Thriftbooks.com User , 12 years ago
Only a couple of weeks have passed since Henry York and his cousin, Henrietta, had their adventure in the mysterious cupboards adorning the wall of Henry's attic room. Since he'd come to live with his aunt, uncle, and cousins in Kansas, Henry discovered the hidden wall of cupboards accidentally, and learned that each one leads to a different time and place. Built by their grandfather, who listed the combinations to the different worlds in his journal, the cupboards can only be traveled through via the large cupboard in Grandfather's room, which had been locked tight until the battle with the witch of Endor. Henry's aunt and uncle receive a letter from his parent's lawyer saying that Henry must return to Boston in two weeks. Henry can't stand the thought of going back, especially now that he might have more of a history in one of the cupboard worlds than he'd ever imagined, and he grows desperate to escape through the door to Badon Hill, which calls to him in his dreams. Henrietta, who'd stolen the key to Grandfather's bedroom so that she could explore the cupboards on her own, finally relents, and she and Henry go behind the barn to retrieve the key. While Henry keeps watch in the growing storm and Henrietta digs, he spots a curious dandelion that appears to glow. Reaching for it, Henry sees a flash of light and is knocked unconscious, with only a dandelion shaped burn on his hand to indicate what happened. After a stranger visits him in his dreams, and he awakens blind, Henry knows that he must escape into the cupboards to find a better explanation of what's happening to him. Unfortunately, less compassionate forces are already interested in his growing abilities... I must admit that I liked this book much better than its forerunner, 100 CUPBOARDS, if only for the fact that I felt much more involved with the characters and that we find out more about the history of the cupboards. Everything comes together in this volume, and, taken as a whole, this original concept makes for an interesting, action-filled story that will keep horror and fantasy lovers on their toes. Reviewed by: Allison Fraclose

Published by Thriftbooks.com User , 12 years ago
Loved it! Can't wait to read these aloud to the kids. Until then, I will greatly enjoy reading them to myself several times over!

Fabulous!! Nate Wilson is the next C.S Lewis!

Published by Thriftbooks.com User , 12 years ago
Dandelion Fire was absolutely fabulous! My husband and I love Nate Wilson's books - don't start it unless you have quite a bit of time because you won't be able to put it down! We can't wait until the 3rd one comes out!

Published by Thriftbooks.com User , 12 years ago
Our family blazed through Dandelion Fire. Not because we were in a hurry but because we couldn't put it down. Ranging from ages 5 to 40, we all loved it. Our youngest boy loved the creepy factor, our 10 year old daughter loved Henry's (and Henrietta's) character growth, our oldest son loved the power Henry gained and the quirkiness of Frank the Fat Fairy. My husband and I enjoyed all of the above as well as the fun Biblical allusions, being reminded of the magic in the everyday, and the "family vacation" that we all experienced in our living room.

Published by Thriftbooks.com User , 12 years ago
Loved 100 Cupboards but the sequel, Dandelion Fire, kept me up all night! The influence of Chesterton, Lewis, and Tolkien cannot be missed in his writing. Like all of Wilson's books, I find them most enjoyable read outloud, so go find someone to read to!
Copyright © 2020 Thriftbooks.com Terms of Use | Privacy Policy | Do Not Sell My Personal Information | Accessibility Statement
ThriftBooks® and the ThriftBooks® logo are registered trademarks of Thrift Books Global, LLC