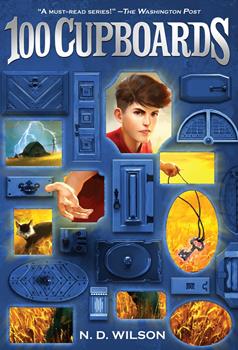 Readers who love Percy Jackson, the Unwanteds, and Beyonders will discover that 100 cupboards mean 100 opportunities for adventure The bestselling and highly acclaimed 100 Cupboards series starts here. What dangers are locked behind the cupboard doors? Henry isn't brave, but when he hears a thumping and scratching on the other side of his bedroom wall, he can't ignore it. He scrapes off the plaster and discovers mysterious doors--cupboards of all...

Published by stormingbanana , 1 year ago
That's how I bought it and that's how it came. The only "issue" is that it has wear on it, it was definitely read a good amount of times and one page was dog-earred. . . but other than that it's great. So I'm happy.

Published by Tiffany , 2 years ago
You don't have to be a kid to enjoy this book. I couldn't read them fast enough. Always waiting to find out what is going to happen next. I just loved this story and wanted to my friends and kids to resd it.

Published by Thriftbooks.com User , 14 years ago
As a mom of four children, I am always on the lookout for great books. This one caught my eye at the library. I checked it out and started reading. Late that night I was still at it with a book light so as not to disturb my husband. Reminded me of being a kid and trying to get one last chapter in with a flashlight under the covers. Unlike a lot of kids' books I could not predict where it was going. Even before the last page I had pre-ordered the sequel. The only negative is having to wait over 6 months to continue the story. Even though I read the library copy, this is one I will purchase for our home library. It is our family's next read-aloud.

Oh for the next one!

Published by Thriftbooks.com User , 14 years ago
From the prologue to the epilogue I was alternately laughing out loud or sucking in my breath! Edge of the seat suspenseful, wonderfully humourous, this book will take it's place with other great otherworldly tomes.What an articulate, compelling author with a 'happy felicity of expression'. This book will be on my list of stand alone favorites as well as recommending it to my students who love mystery, fantasy and adventure! Thank you N.D. Wilson! Bring on the next one! Linda Dickman, Librarian, Norwood Avenue School Northport, NY

Published by Thriftbooks.com User , 14 years ago
100 Cupboards wasn't what I expected. It is far deeper and more intricate than I could have imagined. Once I began, I couldn't put it down. I thankfully had two days off to read it non-stop! It is very intense and also very moving. The only downside is that I have to wait a year for part 2 of the series to be released!

Published by Thriftbooks.com User , 14 years ago
100 Cupboards is the second novel by N.D. Wilson (his first being Leepike Ridge) and I must say that it is many, many things: deliciously dark, insightful, suspensful, and filled with magic. Henry York's parents have been kidnapped biking in South America, and so he is sent off to live with his aunt, uncle, and three girl cousins on their farm in Kansas. Henry is not a farm child; he's never had soda, thrown a baseball (or owned a ballglove), and he's never used a knife, not even a pocket one. All the characters are delightfully odd, as any good Wilson character should be, from his Aunt Dotty (overprotective, the opposite of classy, and frugal) to his Uncle Frank, who I was never sure we were supposed to fully like. On the one hand, Frank is described as being "thin, and not just physically. They meant thin everywhere and in every way," and sells tumbleweeds for 700 dollars a pop on the internet, and on the other, he shows Henry a better way to live, to love soda, baseball, and knives. The three cousins, Anastasia, Henrietta, and Pennylope, reminded me very strongly of the interactions between the girls in Little Women, which was a very fun connection to make. I think an exploration of the three Henrys in the book would be interesting as well; Henry the town, Henry the main character, and Henrietta the cousin. 100 Cupboards I think is much, much better than Leepike Ridge, and I am an unabashed *fan* of Leepike. Leepike is a very good book, but I think 100 Cupboards surpasses it on a number of levels. There is an added complexity to the world of 100 Cupboards, a sense of Lewisian profundity here. 100 Cupboards too, I think, is more subtle than Leepike. The humor in the book, while still providing laugh-out-loud moments, is not nearly as pronounced is specific scenes. Rather, in 100 Cupboards, it seems the whole novel is written with a sly smirk (in a good way). Also, while both Leepike and 100 Cupboards begin with the narrator speaking to the reader, this tack feels much more British, with an almost C.S. Lewis-esque mastery behind it. The novel takes its time setting up the situation and slowly but surely revealing the mystery of the cupboards, all of which is charmingly fun. The mystery builds for close to a hundred pages before Henry really starts working with the cupboards, but there is never a boring moment. The writing takes you by the scruff of your neck and makes you read on. The suspense is really quite good as well, which will provide younger readers with a bit of a bedtime chill. Needless to say, 100 Cupboards has earned its place on my "Favorite books" shelf. A well-done indeed to Nathan, and as an aspiring writer, I think if I get myself to a place of being half as good as Mr. Wilson, I will be well-pleased indeed.
Trustpilot
Copyright © 2022 Thriftbooks.com Terms of Use | Privacy Policy | Do Not Sell or Share My Personal Information | Accessibility Statement
ThriftBooks® and the ThriftBooks® logo are registered trademarks of Thrift Books Global, LLC