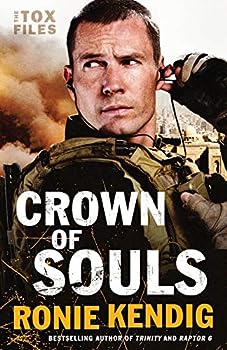 "Kendig has out done herself."-- RT Book Reviews on Conspiracy of Silence Six months after stopping a deadly plague, Cole "Tox" Russell and his team are enjoying a little rest. That peace is short-lived when a sniper shot hits Tox. The enemy is discovered to be one of their own, a rogue Special Forces team operator. Alec King is perhaps the only person as skilled as Tox, and he's out for justice. Furious with orders that got his men killed, he intends...

Published by Thriftbooks.com User , 4 years ago
Action-packed from page one!! This novel picks up with Tox and his team a few months after the events in Conspiracy of Silence. Their time to rest comes quickly to an end when Tox is shot by a sniper. What is discovered is that shot was a message to Tox from Alec King, another Special Forces operator, that has gone rogue. This operator is on a mission of vengeance and Tox and team are tasked with tracking him down and stopping him! As readers have come to expect in a Ronie Kendig novel, what begins is an adventure full of military action, Biblical history, mysterious artifacts, just the right amount of romance, and more. It is apparent that Ms. Kendig has done extensive research for this series. As a wife of a retired Marine, I appreciate how well she portrays Tox's internal struggles as well. In Crown of Souls, readers get a glimpse into the battles Tox fights in his mind because of the missions he has been involved in the past and the guilt that he feels from the things he has been asked to do. Tox is going after what others are calling a madman, but Tox sees a lot of Alec King in himself. Although you could read this as a standalone novel, I would recommend reading Conspiracy of Silence first if you haven't already since this novel picks up where that one left off. I was given a copy of this novel in exchange for an honest review.

Another Great Read From Ronie!

Published by Thriftbooks.com User , 4 years ago
I was so happy to be allowed to be an advance reader for this book! I've been a fan of Ronie's since I was in my teens so being part of the advance team is a huge honor!!! As usual this is a military suspense story with lots of twists in the plot line. This series has an interesting addition with various historical artifacts (and the legends surrounding them) being a major part of the story. There's a touch of romance, a lot of action/adventure, a good bit of suspense, and even a character that regular readers will recognize but not expect in this book!!! All in all a great book that I've already recommended to several friends! I received this book before public release in exchange for my honest review
Copyright © 2020 Thriftbooks.com Terms of Use | Privacy Policy | Do Not Sell My Personal Information | Accessibility Statement
ThriftBooks® and the ThriftBooks® logo are registered trademarks of Thrift Books Global, LLC