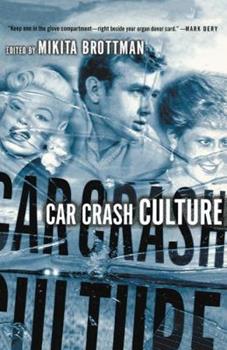 A morbidly fascinating and articulate collection of essays, this book explores the grim underside of America's cult of the automobile and the disturbing, frequently conspiratorial, speculations that arise whenever the car becomes the cause or the site of human death. Through analysis of fatal celebrity car accidents and other examples of death by automobile, as well as through personal memoir and forensic reports, cultural critics ponder our very...

Published by Thriftbooks.com User , 18 years ago
I love this book. It's interesting, scary, disturbing, weird, crazy, and fun. I agree that some of the chapters are heavy, especially the film section, but the others are amazing, the ones in the first section especially. The Kenneth Anger chapter is bitchy-hilarious! The intro is good, too, but my favorite chapter is the one about passengers who've been in accidents. One of the best books I bought this year. Recommended for everybody who drives a car.

Published by Thriftbooks.com User , 19 years ago
This is a book that is an accessible read, but at the same time seriously engages issues of death, sex, and the fetishization of violence in American culture. An amazing array of top scholars in the field of film and cultural studies, including Kenneth Anger, contribute to this landmark anthology, which is truly the best single volume source on this important series of issues. Recommended for the general public, and also as a source for scholarly researchers. A brilliant anthology.

Published by Thriftbooks.com User , 20 years ago
I bought this book because of Julian Darius's essay, "Car Crash Crucifixion Culture", which I'd heard about online on message boards. I thought it was great, and that the book was good overall, though I agree that it was inconsistent.

Published by Thriftbooks.com User , 20 years ago
I agree with the previous reviewer that this is a mixed bag. Some of the essays are extremely technical; others extremely autobiographical. A number of them relate only tangentally. BUT all of them do relate, and the result is like a collage, adding to our understanding. Brotman, the editor, seems to have included what was interesting, even if it was a little off-topic. the book has a taste for the selacious at times, and I think this is what the criticisms of it boil down to. Some of the essays are just plain fun, and really enjoyable. In this large and varied book, there's an essay by Kenneth Anger, a section on crimes, and a fun section on conspiracies involving car crashes. The worst essays are so bizarre (like Ulmer's "Prototype for a MEmorial") or excessively dry (like T. Williams' "Heart Like a Wheel" chapter) and can easily be skipped. But the best (like S.J. Schneider's essay on how Jackson Pollock's crash ironically and morbidly reflected his art, or Julian Darius' intoxicatingly allusive "Car Crash Crucifixion Culture") are truly fascinating reads. Brotman himself has an essay and a half (one is a collaboration) in the CAR CRASH CINEMA section. In conclusion, this is hardly a definitive look at car crashes, but I don't think that it pretends to be. It's highs are fantastically high and will stick with you. Its lows can be skimmed or skipped.Hope this helps.

Published by Thriftbooks.com User , 20 years ago
This book is really great fun, although it's inconsistent. If you want a hodgepodge of work, some utterly fantastic and some unreadable, this is a great book -- and, even if only half the pages are good (and more than that are!), this is a good value. From looking at the Popemobile to Ballard's / cronenburg's CRASH, this has a great scope. Again, the quality overall is inconsistent BUT the overall package is terrific.Of particular note is something called "Car Crash CRUCIFIXION Culture" by one Julian Darius. I can't figure out if it's blasphemous or if it's playful (as the title would suggst, i think..) But it's the funnest informed rant I've ever read...
Trustpilot
Copyright © 2022 Thriftbooks.com Terms of Use | Privacy Policy | Do Not Sell My Personal Information | Cookie Preferences | Accessibility Statement
ThriftBooks® and the ThriftBooks® logo are registered trademarks of Thrift Books Global, LLC