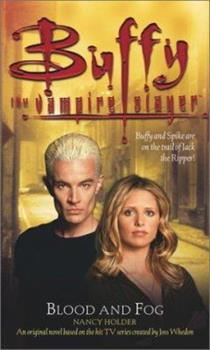 (Part of the Buffy the Vampire Slayer Series)

This description may be from another edition of this product. The strongest magick ever distilled, and the deadliest butcher England has ever known...Buffy Summers is on the trail of a killer demon in Sunnydale, and reluctantly accepts the help of Spike....

Published by Thriftbooks.com User , 17 years ago
"Blood and Fog" is the best Nancy Holder book that I have read. I think "Blood and Fog" does an excellent job of dealing with the very complex issues of Season Six. All of the characters in this book were written very well. I loved the flashbacks to Spike and Dru, but I am very glad that the majority of the story was current day. The Spike/Buffy relationship was written very well.I thoroughly enjoyed reading "Blood and Fog." I loved Jack the Ripper's story. I strongly recommend this book to all fans of "Buffy the Vampire Slayer." I hope to read more books by Nancy Holder in the future.

Published by Thriftbooks.com User , 17 years ago
although it has an odd plot idea, blood and fog mixes in very well with season six. The buffy and spike relationship is explored for the only time in any of the books, and nancy Holder does it very well. Willow is shown exceptionally well struggling with her addiction to magic, and there is a good clue to the end of the series. The idea of Jack the Ripper in Sunnydale is far fetched, and even more when he is a fairy, but the charcter relationships and emtions more than make up for the bad plot.The flashbacks to london are very interesting and you find out about Elizabeth, a slayer with which spike struck his first deal. The main characters in the book are Spike and willow, as they are in the season. The book is worth buying for Spikes comment on taras choice of underwear alone!The finale is well written with Buffy being put in a very uncomfortable position. Her relationship and feelings for spike are explored in a way never before shown on tv and Nancy does what she does best in this interesting, unusual book. The epilogue is extremely sad, as you see a side to Giles you haven't seen since season four, and realise just how much he, Buffy and everyone around them has given up to save the world.This makes you think more than the usual books, and is really enjoyable. I would defineately recommend it to anyone.

One of Buffy's finest

Published by Thriftbooks.com User , 18 years ago
This book is great, and it reveals a lot abouts Spike's past, which is quite interesting. It was set in the 6th Season, Buffy and Spike are still together, same for Anya and Xander, while Willow and Tara are still on their break, its great for all the shippers for these 3 couples, it mends in in with the situation during the part of season 6 it was based on perfectly. It also gives a new twist on the Jack the Ripper tales, Nancy Holder made her own history in the events of what happened in Whitechaple. Blood and Fog is written perfecty, it has everything the characters would say, and it shows all the troubles of the relationships that are going on and exactly how they would be.

Published by Thriftbooks.com User , 18 years ago
I had heard alot of people didnt like this book but I decided to read it anyways and im glad I did .This book stays very true to the show and lets you really see what the gang's thoughts were during this time . Buffy/ Spike fans (like myself) might get tired of Buffy's constant disgust of her relationship with Spike , but if you've watched the show you will know this is nothing new but it kind of pushes it. One thing I really liked is that it does show that Buffy cant resist Spike's charms for long.Also I really liked Willow's story in this book , we get to see both sides of her in this .. Willow who's doing fine on the outside to everyone else but also the magic addict who is about to go over the edge ! All in all I say its very worth the reading .

The blurb above descriping this book is totally inaccurate.

Published by Thriftbooks.com User , 18 years ago
Neither the First, Doc or Rack appear in this book and I never found an evil agenda either. The novel doesn't present a redeemed Spike but rather one that is reminiscent of the Spike at the end of Season 2. He fights to save the world as it is because he likes it that way as much as he does for the love of Buffy. If you are a rabid Pro Spike fan don't be put off by Buffy's musings at the beginning of the book. She thinks of him as everything evil but this is not typical of the book. If you are a rabid Anti Spike don't be put off either. There are lots of flashbacks of evil Spike and he is shown to enjoy chaos and violence. Overall, if you have enjoyed other books by Nancy Holder you should enjoy this one.
Copyright © 2020 Thriftbooks.com Terms of Use | Privacy Policy | Do Not Sell My Personal Information | Accessibility Statement
ThriftBooks® and the ThriftBooks® logo are registered trademarks of Thrift Books Global, LLC