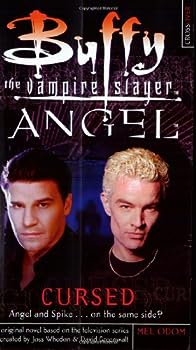 (Part of the Buffy the Vampire Slayer Series and Angel Series)

This description may be from another edition of this product. ANGEL VS. SPIKE Sulking around the Slayer in Sunnydale, the vampire Spike has often run into demons intent on punishing him for throwing in with the White Hats. But when there are hints of a more...

A great Buffy/Angel book - without Buffy

Published by Thriftbooks.com User , 16 years ago
This book is the best Buffy/Angel cross-over that I've read so far ! Buffy plays no active roll, but in Spikes' mind and memories she plays an important roll in the book. After Buffy's rejection when she discovers he bought those demon-eggs in season 5 and discovering that there's a price on his head, Spike joins 3 demons for a well-paid burglary in L.A. ($ 50.000, enough to pay off his debts and give some to Buffy for her debts). Meanwhile in L.A., Angel is hunting down a mystical object (Giles asked him to) and having some trouble finding and getting it: turnes out a lot of people are looking for these objects (there are 7 of them), including 2 different groups of Gypsies - and we all know how well Angel gets along with Gypsies !!! The book is set in an alternate storyline: Buffy season 5 and Angel season 3. Which is technically impossible, but Mel Odom tells you in the beginning and I guess it's the writers' privilege to change these things. Although Angel plays a big part of the story, most of the new thing I learned were about Spike. We learn how he fell in love (really bad) with a Gypsy woman at the end of the 19th century and learn a lot more about his romantic side -- because beneath all that though-guy exterior, Spike is a hard-core romantic deep down in his cold, unbeating heart. The book is really good, especially if you want to learn more about Spike and what makes him (and more specifically his heart) tick !

Odom is a great author

Published by Thriftbooks.com User , 17 years ago
Some Buffy and Angel authors seem to have not even have watched the show before they wrote a book. They just dont get the characters personalities down right. Mel Odom is not one of them.This is a great book if you love Spike and Angel, but the thing is, they aren't together very much in the book at all except in the excellent flashback parts. I found the flashbacks incredibly interesting. I always love finding out more about the older characters one the shows past. Some people hate it, but I thrive on it. Storywise this book is very creative and I would definitely go out and buy it if I were you.

Gypsy Curses - You Can't Have Just One

Published by Thriftbooks.com User , 17 years ago
Angel has pretty much the same problem with gypsies that Anya has with rabbits. Whenever they show up there's trouble. This time not only does Angel have to deal with Gypsies, he finds himself in the midst of a clan war of gypsy demonkind struggling to get possession of a set of sacred stones. One group wants to use the stones to return home, and another wants to use them to take over the world to which they lead.Spike, reeling from his disastrous relationship with Buffy, determined to get her back, gets involved in a series of deals that collapse like a house of cards. Next thing he knows he is riding shotgun for another group of demons after, you guessed it, the same set of stones. Sure enough, there is a collision with Angel on the horizon.While Angel and Spike interact very little in the base story line, their history together plays a strong part in the current conflict. A beautiful woman and her grand-daughter stand at one pole of this conflict. Lyanka, who captured Spike's love for a time 100 years ago and Gitana who blames Angel for Lyanka's death. At the other pole is Chavula Faa and, of course, Wolfram and Hart.The story shifts back and forth between the turn of the century tale of Spike and angel's history together and the modern, almost military combat for final possession of the stones. At stake is the fate of two worlds and the dreams of two vampires perched forever on the thin like between saved and lost.Despite not being what the cover promises, Mel Odom does a solid job of putting together a complex story that is both filled with action and looks deeply into the motivations of the two vampires. We have come to respect Angel over the years, but this is Spike still struggling with his own redemption - the vampire who loved too much. There is something in this novel to please every one - solid, enjoyable reading.

Mel at his best

Published by Thriftbooks.com User , 17 years ago
I am a fan of Mel Odom's. This book is one of his best. I personally liked it because of how it flowed from one part of the story to the next. He does not focus on JUST Angel or JUST Spike. Even if you dont like The show Angel there are references to the show Buffy.

Angel and Spike together - what a good idea!

Published by Thriftbooks.com User , 17 years ago
Great novel; it begins a little slow, with too much descriptions of fights, and chasing, but soon its pace gets right and you get caught on a very interesting story as well as a good developing of the characters.Spike, in Sunnydale, is in trouble after having the demon eggs he was taking care of (for a friend) destroyed by Riley and Buffy (season 6 "As You Were"). As the vampire is in need of some high cash (for him as well as for his beloved Buffy), he agrees to join three other demons in a robbery that will take place in Los Angeles - Angel's territory. Meanwhile, Angel and the Fang Gang are busy after Giles has asked them to keep an eye on something that is arriving in the city from overseas by ship. Eventually, Spike's and Angel's activities (in the present as well as in the past) turn out to be around the same mystical object (and people), and the two vampires are forced to work together. And something in the end is true to real life - sometimes what we wish so much, for so many time, turns out to be NOT the great thing we thought it would be.Angel is the Champion we know, always ready to fight the good fight, while struggles with his guilty about the horrible things he did in the past. Also, Angel feels vulnerable when he contemplates the vulnerability of *his friends* - and the feeling grows bigger when it concerns his new-born son, Connor. Angel is lucky of having Cordelia by his side, because she truly represents a mom's figure for the baby, and is always there for him and his daddy. Wesley, Fred and Gunn have a good part in the book, and I just missed Lorne, whose presence is delayed a little too much in my opinion. The new characters - Lianka, Gitana, Chavula Faa, the Qorqoth demons Dannek, Muullot and Doxxil - are interesting enough to keep you on track. The flashbacks with Angelus, Darla, Spike and Dru in Europe are very original.Spike's portrayal is excellent, Odom proves to be very acquainted with the show and the character. Yet unsoulled (thus showing a little of his bad behavior...), the Spike we see in this novel is the one we have learned to love in "BtVS" since season 5, when the vampire falls for the Slayer and starts developing a new attitude to please the object of his noble feelings. In "Cursed", we see that, although having been made a monster by Drusilla (and Angel, his master), Spike kept the "William" in him, the sweet poet who was driven by love - a love which could change him for better, as it happened eventually and definitively. His interaction with a woman from his past (and Angel's) - Lianka - shows once more how Spike can't deny his *true* nature, one that can beat even the evil demon within him, and make him want to help the... helpless, even a little grudgingly.Angel and Spike together, working on their misdeeds in the past, arguing about things in the present, and helping people using the cunning once used to do evil, is a very appalling thing to see, indeed - well, lucky us the right people have realized th
Copyright © 2020 Thriftbooks.com Terms of Use | Privacy Policy | Do Not Sell My Personal Information | Accessibility Statement
ThriftBooks® and the ThriftBooks® logo are registered trademarks of Thrift Books Global, LLC