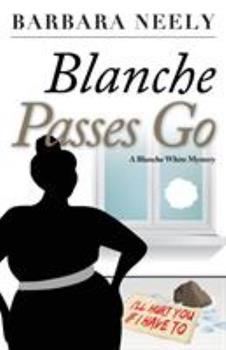 (Book #4 in the Blanche White Series)

Blanche White returns to Farleigh, North Carolina for the summer to help her best friend with her catering business. It's a homecoming rich with the potential for new romance and fraught with the pain of facing the man who raped her at knife-point years ago but was never prosecuted for the crime. Shortly after Blanche arrives, a young woman is murdered and the clues point to the rapist. Blanche investigates, determined not to let him get away with...

Published by Thriftbooks.com User , 20 years ago
Barbara Neely has created a refreshingly different, unconventional detective in Blanche White. Blanche is a large, very dark woman who refuses to be limited by the conventions of culture, whether black or white. She strives to be her own person, to know her own mind and heart, and to find ethical solutions to the dilemmas in her life, even if those solutions are outside standard operating procedures.I recently discovered Neely's Blanche, and I've devoured all the books in the series. These are entertaining tales, filled with life-wisdom, laughter, and mouth-watering descriptions of good meals prepared and eaten. Blanche is a brand-new character in mystery fiction. Invest some time in getting to know her!

Published by Thriftbooks.com User , 20 years ago
Blanche is truly a self confident woman. She doesn't take any mess yet still shows the everyday human frailties we all possess. Barbara Neely's characters are well written from Blanche, the main character, to the culprit. Each is just complex enough to be believeable. In this second in the Blance series, Ms. Neely continues her easy and inviting pace that keeps the reader wondering and wanting more. A definite page turner!

Blanche is at it again She indeed Passes Go

Published by Thriftbooks.com User , 21 years ago
Barbara Neeley in Blanche Passes Go has yet written another supurb black feminist text. What makes this so well written is you don't realize the issues are so deep and multi leveled as you are in the process of reading the book. She is able to give many classic examples of class race and sex in terms of abuse of the black american women. She also has the ability to bring you in to the mystery even if mystery is not your favorate spear. She has dead folks all around with, Carolina catering recipes abounding in the book my mouth was watering. She solves a mystery but more importanly, why do men abuse women? Rape, physical as well as mental abuse are also examined. The silence these women must suffer are explored. Read it is great.

Published by Thriftbooks.com User , 21 years ago
[In this book, r]ape, spouse abuse and jealousy are tools used by men to intimidatewomen. You will find all of these things in Farleigh, NC which is aplace quite good at keeping secrets. With the kids hauled off to jobsin the summer, Blanche decides to spend time helping Ardell, her bestfriend, in their catering business. On the way down home, she meets atrain conductor whose flirtatious remarks opens the possibility for afull fledged romance. All appears to go well with Blanche as shesettles in and helps on their first catering job. Things begin to fallapart as she sees her rapist at the gathering and is forced toconfront her fears about the incident which happened eight yearsago. Blanche knows she must exorcise the rape and the rapist from hermind if she is ever to truly live free. A phone call from ArchibaldCarter, hiring her to investigate his cousin's suspected gold diggingfiance enables Blanche to launch her own side investigation. Thefiance is the sister of her rapist. An unexplained murder of a younglocal white woman has suspected connections with the rapist. Blancheis on the case. Barbara Neely has done it again in presenting uswith a story covering the full gamut of issues regarding women. Wefind out why Miz Cora, Blanche's mother, has been closed mouthed abouther husband all these years. We see how jealousy has caused spouseabuse perpetrated both by Black and White men. We find our hearts opento Blanche as she deals with her memories of the rape, her reluctanceto fully trust Thelvin (her new love interest)and the need to be moreforgiving. All of the elements of emotional turmoil are there to makethis into a wonderful mystery. The question comes, will Blanche gether revenge? Read and see.

Published by Thriftbooks.com User , 21 years ago
She's baaaaack! And, thankfully, ignoring the popular litany to "let go and let God," Blanche White takes a more assertive self-help route to achieve the relief she seeks. Thus begins her trek towards "go."Blanche has put a temporary hold on taking care of other folks, their homes, and their often shady business. Returning to Farleigh, NC, the hometown from which she fled years earlier, she's got one thing in mind: revenge. Her target? A rich and powerful man who robbed her in a most heinous way. Before it's all over with, he's gotten what he had coming and Blanche's fingerprints are nowhere in sight.At first friends and family actually think Blanche is just home for a little R & R from her Boston grind. (As if!) And, by the time they figure out that she's involved in way more than that, dead bodies are popping up all over and some not-so-holy alliances, with Blanche's able assistance, have come completely undone.Always moving on several fronts at once, Blanche holds true to form this time too. Along the route to a bittersweet conclusion, she helps her best friend, Ardell, cater to the rich and famous; she uncovers a hidden part of her own mother's life in exchange for the telling of her own painful secret; and she begins preparing a way for her return home for good once her young charges, Taifa and Malik, no longer need her in Boston. The end? Not quite.Having sashayed up to romance early on in BLANCHE PASSES GO, this time Blanche decides to hold onto it and onto Thelvin, the hardworking brother who's too happy to keep her in good supply. But there are things that have to be worked out: personal boundaries to negotiate, issues of possession, jealousy and plain old fear to be put to rest. Sometimes Thelvin is riding the rails as a train conductor and other times he's just riding Blanche's one good nerve. Holding the mirror up to her own luscious self time and again, though, Blanche finally admits that there is work to be done on both sides.And as if that weren't enough, in a classic display of empowered community action, Blanche and her neighbors embrace three young cookie-lovers trapped in a cycle of domestic violence and despair. After touching on the effectiveness of remedies involving frying pans against sleeping batterer's heads, Blanche and her neighbors help the hapless mother and daughters free themselves.Blanche finally passes go, but you know she won't stay gone for long. And, child honey, ain't we glad!
Copyright © 2022 Thriftbooks.com Terms of Use | Privacy Policy | Do Not Sell My Personal Information | Accessibility Statement
ThriftBooks® and the ThriftBooks® logo are registered trademarks of Thrift Books Global, LLC