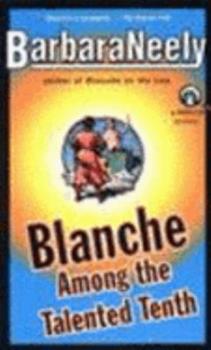 Blanche among the Talented Tenth

(Book #2 in the Blanche White Series)

The godson of a famous feminist commits suicide and another guest has a fatal encounter with a radio while taking a bath. Blanche is enlisted to find out if these events are connected, and in doing so discovers a web of secrets that someone may be willing to kill her for, and a man determined to sweep her off her feet no matter how much she weighs.

Published by Thriftbooks.com User , 20 years ago
i met barbara neely when she came to san francisco earlier this month to promote her new novel. she was warm, ebuillient, and was eager to explain the writing process and signed autographs, without a fuss.... i loved this novel. blanche is an uncommon sluth who proves that mother wit can carry you just as well as book learning. and blanche proves her point nicely as she deals with the vacationers at a maine resort. neely also touches on the issues of racism within the black race ( color consciouness ) and dillemmas between the rich and poor. blanche is not another woman fretting about not having a man, but neely shows blanche to be a desirable, witty and charming woman. neely also points out with uncompromising honesty how blacks do what they can to survive in white society. i also admire neely for the references she makes to the goddess religions and african=american culture. she shows black readers there are other alternatives to christianity....

Published by Thriftbooks.com User , 21 years ago
I really love the Blanche mystery series.

Published by Thriftbooks.com User , 22 years ago
As a reader of three mystery novels a week (average), I know there isn't much new in the plotting of a book--the formula is pretty familiar to me. But this is one novel in which I didn't want the mysteries to be solved, because then the book would end. Blanch would take her adopted children and her all-too-normal middle-aged frustrations and go home from the posh resort--and I would lose a friend. Blanche and I don't share an ethnic or social background, but we sure do share a lot of frustrations with teenaged children, social climbers, middle-aged bodies, and fickle men.And, it's Blanche's quick wit and humanity that enables her to solve the mystery at the same time she provides a valuable insight into her life and values, and into my own.

Published by Thriftbooks.com User , 22 years ago
I read this book after reading "...On the Lamb." Both books are good reading and hold your attention until the end. Neely keeps you coming back for more.

Be prepared, you are about to meeet a new friend

Published by Thriftbooks.com User , 25 years ago
Blanch is savey and savage when it comes to solving crimes and caring for her friends and children. Watch out, you will start to care for her from the first page and by the end of this book you will want to pick up the phone and talk to her for hours but you have to wait for the next book. Lets hope it's soon. In the mean time read "Blanch on the Lam". It's where she began.
Copyright © 2022 Thriftbooks.com Terms of Use | Privacy Policy | Do Not Sell My Personal Information | Accessibility Statement
ThriftBooks® and the ThriftBooks® logo are registered trademarks of Thrift Books Global, LLC