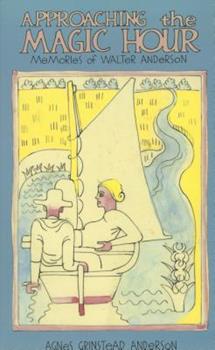 A widow's riveting yet poignant memoir of her marriage to a demonic creator, the extremely inspired Gulf Coast artist Walter Anderson, whose splendid art was heightened & enriched by his madness

Published by Thriftbooks.com User , 13 years ago
A lot of people from the South are familiar with Walter Anderson's ingenious art. But what this spellbinding memoir captures is the powerful, grounding force behind the man: his wife, Sissy, whose love and bottomless compassion (and forgiveness) made it possible for him to pursue with abandon his creative compulsions. With unflinching and sometimes startling candor, Sissy recounts Anderson's plunge into psychosis early in their marriage -- a madness that often turned violent. She selflessly gave him the freedom he demanded to create art and commingle with nature, but she also lived much of her life in a state of grave concern, sadness, frustration and even fear, while raising their four children largely on her own. Sissy helps us understand why she stuck with him and loved him so deeply until the very end, even after a life and relationship filled with torment. You'll never look at Anderson's art the same way again.

A Personal View of Walter Anderson

Published by Thriftbooks.com User , 15 years ago
I have read numerous books on Walter Anderson but this by far was the best. His wife gave a personal account of his as well as their lives. It has truth as well as compassion. His art is much easier to appreciate after reading this enlightening book.

A love story far beyond the usual

Published by Thriftbooks.com User , 19 years ago
I first heard of Walter Anderson from an artist living in Mississippi when I was in high school, in 1963. She took me to the compound where Walter Anderson lived with his wife, brother and extended family. Anderson had become a recluse by this time, and I never met him. I got to see the pottery work he did and became fascinated with his art. As a sixteen-year-old, I was impressed with the colors and designs. I have aged, become an artist myself, and seen more of his work, I have come to appreciate the mystic quality, the blending of earth, sky, animals,plants, air, being and emotion into a whole expression.That this passionate expression was tied in with madness has fascinated me in understanding the edge between creativity, altered states of consciousness and mental illness. Understanding the complex persona of a person who has collapsed his entire life into his art is the challenge here. This is the person who tied himself to a tree on an island in the path of a hurricane to stay at work, after all. The relationship of this creative genius to his family and his struggle to bring forth the body of work we gratefully have today is the story of this book. It is honestly and well told. The unstated story is that without the tolerance, understanding, even suffering of Agnes Grinstead Anderson (the artist's wife), neither the man nor his work might have survived. In a time when people are less willingly to sacrifice for each other, This woman's story looks at the complications of a real life beyond the reach of easy pop psychology solutions.

The eyes of a child

Published by Thriftbooks.com User , 21 years ago
Walter Anderson had the eyes of a child. His wonderment at the world around him, his passion for recording his love, and his driven personality -- all this makes for fascinating and inspirational and romantic reading. Anderson is being discovered as a true original -- his classical training in Europe and the Northeast is the foundation for his unusual work. I found this account to be as marvelous as the letters and life of Van Gogh. Sissy Anderson's writing is poetic and unpretentious. A classic.
Trustpilot
Copyright © 2022 Thriftbooks.com Terms of Use | Privacy Policy | Do Not Sell My Personal Information | Accessibility Statement
ThriftBooks® and the ThriftBooks® logo are registered trademarks of Thrift Books Global, LLC