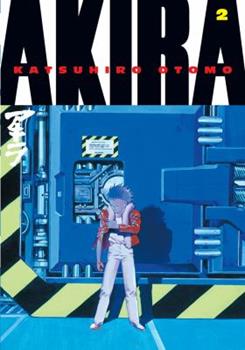 IN THE 21ST CENTURY, Neo-Tokyo has risen from the ashes of a Tokyo obliterated by a monstrous psychokinetic power known only as Akira, a being who yet lives, secretly imprisoned in frozen stasis. Those who stand guard know that Akira's awakening is a terrifying inevitability. Tetsuo, an angry young man with immense--and rapidly growing--psychic abilities, may be their only hope to control Akira when he wakes. But Tetsuo is becoming increasingly unstable...

Published by Thriftbooks.com User , 18 years ago
If you know of the Akira Anime this Manga should be of no surprise; however, there are some definite differences that will become evident upon reading. 1st off the anime is way way shorter and edited to such an extent that most casual watchers are left feelin confused. These books will clear up any problems you may have had with the movie and expand upon the foundation the movie laid out. Be aware these books not in color.

Published by Thriftbooks.com User , 20 years ago
This volume is much like the first volume if you look at the story-telling. Unlike most comic-books where they try to stuff as much information as possible in as little as possible pages, this is the complete opposite. Each tiny detail of information is spread out over several pages which makes it an easy to follow story, you won't miss out on vital details easily, and it isn't slow anywhere thanks to the 'animated' art.About the story: After the agency, under leadership of 'the Colonel' catches up with Kaneda, Kei and Tetsuo (all in vol.1) each of them is taken with them to their test-base where Tetsuo's powers are quickly increasing. When Tetsuo learns there are more numbered subjects like him he goes looking for others. That's how he learns about Akira. With this new knowlegde Tetsuo goes out to find project Akira, determined that nobody is gonna stop him from doing so. The agency turns desperate because if Tetsuo should reach Akira, there is no way of telling what is to become of the world. Meanwhile Kaneda and Kei are also on their way to stop Tetsuo, only in a more brutal way. A race against the clock begins. The first half of this collection is really a big phase were you get to wonder "who is possibly enpowered and who's not". It's a very good read with enough twisting points to keep it on the edge. The second part is even better when the hunt for Tetsuo begins and we have to see who gets to Tetsuo first, or is Tetsuo himself the first to reach his goal ? We also get to meet Akira himself for the first time, which makes you look to each panel very curious to catch the first hints of what he might be capable of.This second (from 6) books doesn't let you down at any point if you liked the first volume. The story stays action-packed and the style in which it is done stays the way you're accustomed to it. Fast but not revealing to much at once. For people who are interested in it, read the first volume first because reading it in order is a must. It won't be a disappointment. For people who have already read the first installment: the joy continues.

Published by Thriftbooks.com User , 20 years ago
definitly different from the movie. the end of this book is almost at the same point of where the movie ends, i can tell you that i have great anticipation for the next 4 volumes that come out.

Science Fiction At Its Best

Published by Thriftbooks.com User , 20 years ago
This is the 2nd collected TPB volume in Katsuhiro Otomo's science fiction epic masterpice. There are six volumes in total. All of which are essential to have the complete manga story. That, of course, goes without saying. If you are not familiar with manga, you should note that it is almost always produced in black and white. Such is the case with Akira. This may be a turn-off for some, but on a positive note, it allows the reader to pay more attention to the detail of the drawings, and to the depth of the script.Wheather you're a fan of manga, comics, or sci-fi in general, Akira is a must.

Published by Thriftbooks.com User , 20 years ago
Katsuhiro Otomo goes above and beyond. The detail in his first and second book really struck me. Don't get too excited though. There are four more volumes coming out! If you want a good long and intriging plot look no further than Akira!
Copyright © 2020 Thriftbooks.com Terms of Use | Privacy Policy | Do Not Sell My Personal Information | Accessibility Statement
ThriftBooks® and the ThriftBooks® logo are registered trademarks of Thrift Books Global, LLC