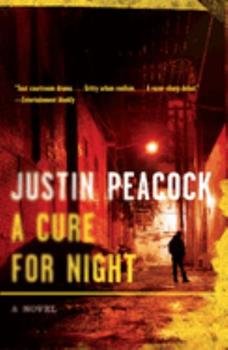 A Cure for Night

A Washington Post Best Book of the Year Edgar Nominee Best First Novel Joel Deveraux is a rising star at a white-shoe law firm in Manhattan. But after a drug-related scandal costs him his job and nearly his law license, he slides down the corporate ladder to the Booklyn Defenders office. He arrives just in time for a high profile murder case, where he is assigned to work with the tough and savvy Myra Goldstein. With pressure from their boss and interest...

Published by Thriftbooks.com User , 13 years ago
This is one of those books that you "can't put down". It begins compellingly and maintains the pace. The story follows an attorney whose lover overdoses on heroin--the drug they have both been using and which causes his life to spiral downward. He loses his reputation, his well paid position at a high powered firm, receives a 6 month suspension of his license and finds himself working at the Public defender's Office in Brooklyn. Suddenly he is moved from the mundane cases he is working to be second chair in a murder trial. The first chair is a woman who is well known for her skills and he hopes to learn from her. As they work together, he finds they have a great deal in common and their working relationship evolves into a friendship which enables each of them to open themselves to another person, and the inherent danger that entails. The meaning of "justice" is thoroughly explored throughout the novel. The characters are well developed and the story line leaves the reader wanting more. A must read.

A realistic view of the Criminal Justice System.

Published by Thriftbooks.com User , 13 years ago
"A Cure of Night" was a gripping story about an attorney who has experienced both the highs and lows of success. Once a promising, high priced and powerful attorney, Joel Deveraux was almost disbarred following a scandal that involved a dead girl and drugs. Now a public defender, Joel is second chair in a high profile trial murder case that involves defending a black, drug dealing defendant who has been accused of killing a white college student and injuring a rival drug dealer. Facing the biggest challenges of his life, resisting the temptation of drugs and redeeming himself, Joel allows us to navigate the criminal justice system as an insider, where the truth is in the eyes of the beholder. What I enjoyed about this novel is the realistic view of criminal justice and it's participants. As a person who has worked in the system (in a prosecutor's office and in the homicide office of a large metropolitan police department), I can tell you that the issues that arose in this story common. As a homicide detective or prosecutor, you soon realize that you can't pick your victims, witnesses or your evidence. You have to take your witnesses as they come, even if they are drug addicts and struggling with their old demons. From the perspective of the defense attorney, making sure that the rights of the defendant (no matter how upset we get and how it doesn't seem fair) are protected, is their primary goal. Finding holes in the evidence and tearing apart the state's case is what they do within the confines of the law. So, as Joel prepares for the fight of his life, he learns that the truth isn't necessarily as it appears or what is important. I would highly recommend this book to anyone.

Published by Thriftbooks.com User , 13 years ago
My perspective on this book is colored by the fact that I am a criminal defense attorney who often takes court appointed clients. I can't speak to the particularities of New York's justice system, but the attitude and dialogue of the lawyers is pretty authentic. Many criminal attorneys end up in our profession because, like the protagonist, they scewed up badly at their first job. The interactions depicted by Peacock reminded me very clearly of moments I've seen as an attorney: the unusual view of criminal attorneys held by corporate types, the fatal attraction of substance abuse for some lawyers, getting too caught up in a case. Peacock does a good job of sharing authentic experiences in the life of a criminal attorney Peacock's view is far from idealized. He uses different characters to examine the various dominant views of the legal profession by both practitioners and outsiders while advancing the story. He also does a great job of moving through the legal process from start to finish through the context of murder case where the accused is a career criminal. He doesn't romanticize any of the story, but tells it like it is and lets the story sell itself. There are a lot of enlightening bits of information here for someone who isn't a criminal lawyer. The biggest being none of the noirish patter from the dust jacket (the only part of the book that is overdone), but the revelation that what happens in court is not a search for truth but a competition of stories told by professional storytellers. Peacock also puts the law more front and center than authors like Scott Turow, which was interesting to see and explained well without interrupting the narrative's flow. "A Cure for Night" is not a thriller involving lawyers, it is a story about the legal system designed to protect citizens accused of crimes. The compelling nature of the story comes from an authenticity rooted in reality. The only exception is the ending, which seemed sort of tacked on, but which is still within the realm of the possible. The entire novel, really, could be taken from actual case notes. Fans who want the gritty reality of the early Dragnet or first seasons of Law & Order will find it here, people who want a thriller set in a vague legal context may find their eyes opened. Excellent first effort by this author.

Published by Thriftbooks.com User , 13 years ago
In his first novel, A Cure For Night, Justin Peacock has taken a major step towards becoming a "must read" author of legal and "life-on-the-street" thrillers. Peacock tells the very interesting tale of lawyer, Joel Deveraux, who is forced to resign from his top tier corporate law firm after a drug-related scandal, and takes a much lower-paying job with the Public Defender's Office in Brooklyn. In this position, Deveraux, who narrates the story, feels that he is functioning, albeit in a minor way, as a cog in the slow-moving NYC justice system until he accepts "the second chair" alongside a more experienced female Public Defender in a high-profile murder case. Without going into the details of the story and risk spoiling any of the drama that unfolds, it is from this point on that you won't be able to put the book down. In addition to Peacock's exceptional prose and narrative skills, his strong characterizations, and his ability to maintain an ongoing sense of courtroom tension, he does an excellent job of conveying "life" inside the public defender culture as well as in the housing projects in Brooklyn, where selling drugs too often paves the road to money and prestige. For an experienced author to tell a compelling story in such a way that the reader is willing to delay whatever else has to be done in order to read what happens next is a major accomplishment, and a sure sign of a bestseller. For Peacock to accomplish this so well in his first book makes him an author who, in "my book," deserves a large reader audience and one who has the potential to climb quickly to the top of the list of bestselling authors. The only minor criticism I have is that while Peacock creates a vivid depiction of his characters' personalities, I would have liked to have been provided a stronger profile of their physical descriptions. I am already looking forward to Peacock's next book; but, until then will be recommending A Cure For Night to my family and friends. Do yourself a favor and read A Cure For Night!
Trustpilot
Copyright © 2022 Thriftbooks.com Terms of Use | Privacy Policy | Do Not Sell or Share My Personal Information | Accessibility Statement
ThriftBooks® and the ThriftBooks® logo are registered trademarks of Thrift Books Global, LLC