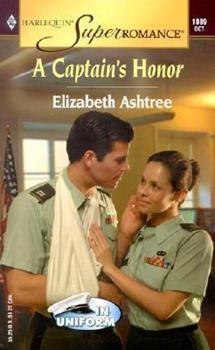 A Captain's Honor : In Uniform (Harlequin Superromance No. 1089)

(Book #4 in the In Uniform Series)

This description may be from another edition of this product. From the first glimpse, Captain Nathan Fordham knew he was in trouble with Chief Warrant Officer Rachel Southwell who "dazzled him with her contradictions and intrigued him with her complexity." But...

#1 in the stories of the Fordham brothers - Military Romance

Published by Thriftbooks.com User , 15 years ago
Chief Warrant Officer Rachel Southwell has been offered a position in the Pentagon which will bring her closer to home and her parents. Yet her assignment has as much danger as a war zone. Captain Nathan Fordham is getting advise from his brother, Julian in CID on what methods to use to entrap the abusive General Donner. He hopes to have Rachel's help in getting the evidence needed to bring down the two star General. The trouble is that the General could ruin both of their careers or even have them shipped out of the country. Nathan has emotional baggage from his own father's neglect and Rachel has issues with men and their staying power. She has learned to depend on no one other than herself. With her father recovering from a stroke and her mother needing help she doesn't want to cross the General too stongly but the tension of waiting for Donner to make advances was telling on her. Nathan was determined to watch Rachel's back but Donner kept sending him on other errands. [sneaky little devil] Of course the General's wife was no help at all. She liked the statis quo. Then there was Allison, Rachel wanted to protect her from Donner. And Donner was a puzzle - exhibiting little signs that Rachel failed to pick up on when they were in Hawaii - though she did make a life threatening jump to get away from him. They unexpectedly bumped into Senator Zemin when she was least expected, which displeased General Donner. Quite an intriguing story - really neat characters, especially Adam-Ant - decently paced action - confused hormones [again] - what a way to end. Definitely Recommended --M

Published by Thriftbooks.com User , 19 years ago
From the first glimpse, Captain Nathan Fordham knew he was in trouble with Chief Warrant Officer Rachel Southwell who "dazzled him with her contradictions and intrigued him with her complexity." But there is no time for romance on this assignment. Working in conjunction with his brother, a Criminal Investigation Division major, Nate has a plan. He needs a woman without fear to make her vulnerable and with the strength to go after the big brass. He knows that Major General Walter Cornelius Donner must be stopped before he destroys another woman under his command with his sexual harassment.Rachel can outrun, out think, and out motivate almost any man in the Army. She willing accepts the most difficult assignment at the Pentagon in exchange for an opportunity to be closer to the son she left behind when she enlisted. With his life threatening asthma, Rachel needs to get him listed as dependent quickly. Rachel knows that failure on this assignment will end her career. With the growing attraction to Nate, she needs the assignment resolved just as quickly. Unfortunately, the general and a mysterious stalker are not above using her vulnerabilities to their own advantage. Author Elizabeth Ashtree pens a powerful tale of honor in the military with A CAPTAIN'S HONOR. Women who have endured sexual harassment will find themselves impressed by Ashtree's careful rendering of such a devastating crime. Unfortunately, the secondary plot of stalking detracts from the power of the narrative. Nevertheless, Rachel's struggles to cope with such a challenging assignment will keep the pages turning. Nate's ambivalence over his role in bringing her into such a difficult situation will likewise strike a sympathetic cord with readers. A memorable military romance, A CAPTAIN'S HONOR comes highly recommended.

Published by Thriftbooks.com User , 19 years ago
After consulting with his brother, a Criminal Investigation Division major, Army Captain Nathan Fordham decides it is time to stop the sexual harassment by Major General Walter Cornelius Donner. Nathan, as the military aide to the Two-Star General, knows how odious Donner is towards women. He believes the new personal assistant may have the right stuff to end the predatory career of Donner for it will take an intrepid woman not afraid of retaliation towards herself or her family. Chief Warrant Officer Rachel Southwell would prefer to avoid the land mines described by Nathan. However, she has no options because of the needs of her son. Rachel agrees to trap the General knowing failure means her career.As Rachel with Nathan's support does her best to stop Donner, a stalker begins intimidating her and her family. Nathan knows that is not part of the MO of his superior officer so is at a loss as to whom is threatening Rachel. He also knows that he loves her, but realizes he must do nothing to hurt the case. Nathan wonders whether either of them will survive the wrath of General Officer club that prefers protecting all members even one violating the Army value code.A CAPTAIN'S HONOR is an exciting military sexual harassment case that readers will enjoy as Donner acts more like a sheik running a fiefdom with a harem. The stalking subplot adds tension, but takes away from the powerful look at a superior abusing power to take advantage of an employee. Fans will salute Elizabeth Ashtree for this strong military romance.Harriet Klausner
Copyright © 2020 Thriftbooks.com Terms of Use | Privacy Policy | Do Not Sell My Personal Information | Accessibility Statement
ThriftBooks® and the ThriftBooks® logo are registered trademarks of Thrift Books Global, LLC