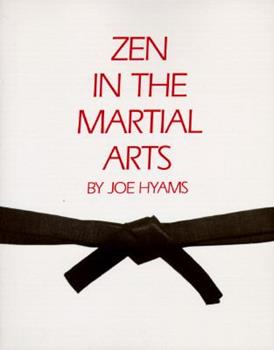 Zen in the Martial Arts

"A man who has attained mastery of an art reveals it in his every action."-- Samurai Maximum . Under the guidance of such celebrated masters as Ed Parker and the immortal Bruce Lee, Joe Hyams vividly recounts his more than 25 years of experience in the martial arts. In his illuminating story, Hyams reveals to you how the daily application of Zen principles not only developed his physical expertise but gave him the mental discipline to control his...

Best book of it's class

Published by Thriftbooks.com User , 17 years ago
I bought this book as a kid at 16 just being introduced to martial arts. 20 years later, I can still say, after college and an adult life filled to overflow that this book, among the hundreds I have read that touch on similar subjects, is STILL the best book of it's class. It is modern, unlike Sun Tzu or Samurai literature, and that is the book's strength. Samurais did not have the tedium of modern life to contend with: boardroom meetings, petty office jobs that lend life no meaning, mindless commercialized, propagandized media buzzing all around us. Samurai did not live in our world of wasting time and energy on nothing. They had time to get dressed and take their time, breathe clean air, and be human, and that is what Zen in the Martial Arts attempts to do, restore that balence to a martial artist's lifestyle...in a Modern world, however, not in some remote past. And that is why this book is in a class of it's own. Many try to approach this focal point without success, but none in my opinion succeed in so few pages or in such inspiring, heart-to-mind immediacy as Hyams manages. It may not seem important to a souless, bloodless academic, but to many a martial artist for several generations it simply is without peer. There is nothing New Age or ridiculous about this book. I feel sorry for the people who don't understand how to appreciate it. This is written by a man who was deeply affected by Bruce Lee, most likely the greatest modern kung fu exponent of our age, because Lee was a kung fu warrior who lived in the world of hype and electrified delusion and he could see through it, even while using what it had to offer. Hollywood nothing. The only thing even remotely Hollywood about this book is the fact that Bruce Lee had been in Hong Kong Films and starred on a TV pilot that immediately replaced him before airing the actual show because Lee, as an actual Chinese, was "too Chinese" (meaning a white guy needed to interpret a Chinese for us whites). Wow. That's so Hollywood of you, Bruce. On the reality side, Hyams transmits the inspirational genius that was everything in Bruce Lee. How to be fluid, like water, like the yin and yang of the Tao. How to dare to will to control one's own life. Yes, ignoring dental pain is possible... So what? Pain can be ignored. This is not the point of this book. There is, however, an abundance of stories about people who overcame their fears and anxieties and their lacking to go on to open up the horizon in their world. This is a book about taking control and navigating one's life, as a martial artist, as a warrior in the modern world, toward freedom of the spirit. It reminds us that we are alive and that we can do pretty much anything that we really WANT or need to do, not really about something so trivial and pointless as "going to the dentist without anesthetic". The emphasis is on freedom to get what we need and want out of life, not on merely testing ourselves through performing superhuman feats. Maybe for

Published by Thriftbooks.com User , 19 years ago
First I'd like to address a couple of criticisms that I read here that this book is rather superficial and doesn't get into Zen concepts in depth. That's true, this book is really only an intro to Zen--if you're already knowledgeable then this book will probably be too basic. However, for the beginner there is no better place to start, and as someone else here observed, the quotes from Bruce Lee are almost worth the price of the book by themselves.Joe Hyams started his karate training back in 1952 with Ed Parker--a full ten years or more before the craze got started in America. He had the opportunity to train with such greats as Bruce Lee, Bong Soo Han, Ed Parker, and Jim Lau from the very beginning. Joe encountered many trials and tribulations, frustrations, and disappointments during his training, but he never gave up. One reason is he often had the opportunity to discuss his problems with the many great teachers he trained under, and they often offered their wisdom and insights to help him through the difficult times. He took that wealth of personal experience and knowledge and put it all into this little book.Hyams gives a very clear, concise, and easy to understand introduction to Zen in the martial arts. The discussions are often illustrated and liberally peppered with fun anecdotes from his personal experiences with different masters, making this almost a personal journey through the dojos and minds of some of the most famous martial artists of our time. Hyams writes very well (he was a famous Hollywood screenwriter) and so rather than another dry, obscure, Zen philosophy tome, the book sounds more like an intimate conversation with a friend over a glass of wine and dinner. It sounds like he's personally talking right to you.Hyams touches on so many concepts that I won't try to discuss them much here. But I will mention probably the most important one--which is persistence. Hyams points out that it often isn't the most talented and gifted student that achieves the most in the martial arts--since they often quit the first time they encounter a serious difficulty--since they're so used to everything coming so easy. Rather, it's the person who often has very little going for him physically, and has the patience and perseverance to stick it through to the end.I'll mention just one other important principle. This relates to the Zen idea of living in the moment, especially when training, but also in everything else one does in life. Don't allow other concerns, however pressing or important, to weigh on your mind and distract you when you're training. Concentrate on living in the present moment and you'll make the most of your training--and of all the other activities in your life. Someone who's always worried about their other concerns can't truly live in the present, and therefore will never truly enjoy or make the most of whatever activity they're engaged in. Part of their mind is always somewhere else. Strive to always live in the now, in the

Published by Thriftbooks.com User , 22 years ago
In this book, Joe Hyams sheds light on obscure facets of our personality, many of which we are not even aware of. Why are we so anxious, why do we fear pain, why are we so eager to show our force to others, why do we have to go through daily confrontations with our family, spouse, colleages ? Through a short but clear description of the issues that make our lives sometimes difficult and a thorough analysis of the mental process involved in overcoming them, Joe Hyams explains all the internal revolutions that a sound mentality can create in human beings. Non martial artists will find in this book some answers to those questions they have always been asking themselves about their behavior and how to make the most out of their lives. Martial artists will be exposed to the Zen aspects of martial arts, which is probably essential to a mastery of these disciplines. As a beginner in Shotokan-Karate, I found this book enlightening on some issues that take a life-long to master and even understand. The simple examples given in this work allows the reader to have a general understanding of the Zen principles behind martial arts and behind everyday life.I strongly recommend this book, both to martial artists and to others, it will land you on the ground and make you understand that your way to happiness is still long and wanderous but may be stated in simple words understandable by all. The Zen principles and adages punctuating the book also constituate a good volume of meat for the mind.Thank you for reading through. Stephane

How to make a better life

Published by Thriftbooks.com User , 26 years ago
In Zen in the Martial Arts, Joe Hyam's uses the backdrop of the martial arts and his many unique experiences to show us all the way to a better, more rewarding life. By sharing his experiences with such martial art legends as Bruce Lee, Ed Parker and Bong Soo Han as well as many of Hollywood's biggest stars Hyam's presents in an engaging way the principles of Zen that lead to greater control and inner peace. Even those who are not fans of the martial arts will appreciate the unique and interesting stories that captivate and teach. Each chapter focuses on a life lesson learned in such an engaging way that I find myself reading this book again and again -- each time gleaning a little more of the wisdom in it. I am amazed at the number of times I thumb back through for a favorite passage or thought. A worthy addition to the library of anyone who seeks for greater direction and understanding in their life -- I would recommend Zen in the Martial Arts highly
Trustpilot
Copyright © 2022 Thriftbooks.com Terms of Use | Privacy Policy | Do Not Sell My Personal Information | Cookie Preferences | Accessibility Statement
ThriftBooks® and the ThriftBooks® logo are registered trademarks of Thrift Books Global, LLC