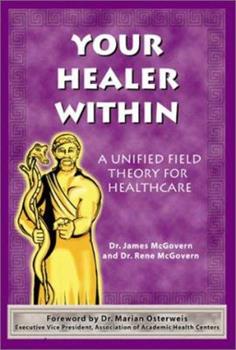 Your Healer Within: A Unified Field Theory for Healthcare

by James McGovern and Rene McGovern

Your Healer Withinprovides a way to understand both ancient and modern approaches to healthcare. It explains, for instance, how our emotions and beliefs can affect our bodily functioning and hence our internal healing mechanisms. The latest scientific findings are included in this book to show that the systems of the body, mind, and spirit interact. This book develops a set of principles as part of a unified field theory which provides a basis for...

Published by Thriftbooks.com User , 17 years ago
As an osteopathic educator for many years, I was happy to finally read a book that gave the sources for some of Dr. Still's principles. Other health professionals and the general public can learn a lot by reading this book.

Published by Thriftbooks.com User , 17 years ago
Readers of this review should know that this person may have had personal reasons for so emotionally reviewing this book and recommending Gevitz's book. This review is curiously similar to an earlier, emotional review. I recently presented the basic concepts of this book "Your Healer Within" at the New Ideas Forum of the American Academy of Osteopathy's national meeting and received great reviews from the dozens of physicians in attendance. I was also asked to write about these same concepts in the final chapter of a new book (in German) including scientists and physicians from various universities in Europe. This book will also be translated into yet another language--Spanish--by its European publisher. Unfortunately, there is a lot of junk written about similar topics and so readers may be confused, and not realize that this book is a summary of the latest scientific research. They may not know that this book has been praised by the executive director of the American Osteopathic Association (AOA), the president of the American Association of Colleges of Osteopathic Medicine (AACOM), the president of the American Academy of Osteopathy (AAO), and the president of the Association of Academic Health Centers (AHC). Just as we should have realized that we could not find the smallest particle without being confronted by the limitations of the smallest actions (quantum physics), so too we should have realized that finding a unified field theory (across biological, social, etc., as well as physical fields) would require very general philosophic principles--Aristotle's four perspectives on causality. This book is basically an application (in healthcare) of these great philosophic principles of Aristotle.

Published by Thriftbooks.com User , 19 years ago
This is a must read for anyone interested in healthcare. It explains what we know on an intuitive level - that there is a true mind/body/spirit connection and that this interaction plays a significant role in wellness. I was intrigued by the fact that A. T. Still (the founder of osteopathic medicine)was inspired by some of the greatest thinkers in history such as Hippocrates, Galen, Virchow, Pasteur and Darwin.The book was very insightful. The illustrations were also well done and added a nice touch. I highly recommend this book!
Trustpilot
Copyright © 2022 Thriftbooks.com Terms of Use | Privacy Policy | Do Not Sell My Personal Information | Accessibility Statement
ThriftBooks® and the ThriftBooks® logo are registered trademarks of Thrift Books Global, LLC