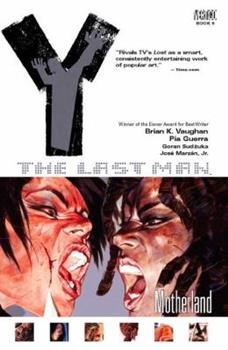 WINNER OF THREE EISNER AWARDSFeatured in THE NEW YORK TIMES and on NPR, Y: THE LAST MAN is the gripping saga of Yorick Brown, an unemployed and unmotivated slacker who discovers he is the only male left in the world after a plague of unknown origin instantly kills every mammal with a Y chromosome. Accompanied by his mischievous monkey, Ampersand, and the mysterious Agent 355, Yorick embarks on a transcontinental journey to find his long-lost girlfriend...

Published by Thriftbooks.com User , 15 years ago
This is my favorite series. If you are going to spend the money on a series of graphic novels, this is the one. Especially first three volumes.

Published by Thriftbooks.com User , 15 years ago
My boyfriend introduced me to this fine graphic novel series by loaning me books "The Last Man 1-3". I'm not really into comic books, so I didn't start reading it for a few months. But when I finally picked it up. I was hooked. So much so that I ordered "Last Man" volumnes 4-9. If you like apocalyptic fiction then you will love this series. Pia Guerra is a fabulous illustrator. I just can't wait till they publish "Last Man" #10. My only advice is to read them in order, otherwise you'll get lost.

Published by Thriftbooks.com User , 15 years ago
I enjoyed Motherland tremendously - much more than the previous two collections. Finally, we are getting some real answers to the cause of the "gender-cide," and not just seemingly randome travels and flash backs, which I felt really bogged down the series. While it seems clear things are coming to a head, and I will regret the end of this well written series, I would rather that than have it drag on too long. Highly recommended for upper teen to mature readers.

Not your typical heroes in tights fare...

Published by Thriftbooks.com User , 15 years ago
This comic continues to advance the medium. The quality of writing comes through in the compelling characters and fascinating world of Y: The Last Man. This installment is no departure from form, but extends the back story by fleshing out the family of one of the principle protagonists.

The end is near

Published by Thriftbooks.com User , 15 years ago
Brian K. Vaughan's compulsively addictive series is wheeling to a close, and when reading Motherland, the ninth collected volume of the series, this becomes all the more apparent. Things come to a head as Yorick, his pet monkey Ampersand, Agent 355, Dr. Mann, and Rose search for Dr. Mann's kidnapped mother, and learn that Yorick indeed is not the last man on earth. More secrets of the plague that wiped out the men are revealed as everyone makes more shocking discoveries, and 355 and the ninja named Toyota face off in a fight that one of which won't walk away from. In the meantime, Yorick's girlfriend Beth awaits him in France, while his other Beth and sister Hero are on the run. There is also a one-shot devoted to the super-model turned garbage girl that Yorick had a run in with way back in the first volume, which is interesting as well. While it's clear that the series is headed towards a close, Vaughan doesn't rush through things and keeps the book well paced. Co-creator Pia Guerra offers the same brand of artwork that you'd come to expect by now, so take it or leave it. All in all though, Motherland is another excellent volume in the Y: The Last Man series, and here's hoping the end is as great as the whole.
Trustpilot
Copyright © 2022 Thriftbooks.com Terms of Use | Privacy Policy | Do Not Sell My Personal Information | Cookie Preferences | Accessibility Statement
ThriftBooks® and the ThriftBooks® logo are registered trademarks of Thrift Books Global, LLC