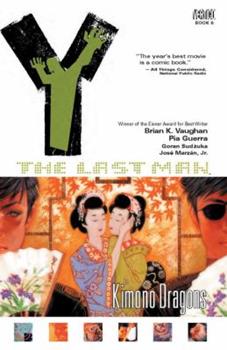 WINNER OF THREE EISNER AWARDS KIMONO DRAGONS brings the hunt for Ampersand the monkey who could unlock the mystery of the male-killing plague to its explosive climax, as the last man on Earth and his companions finally reach Japan and discover the truth behind Ampersand's abduction. Collects issues #43-48 of Brian K. Vaughan and Pia Guerra's award-winning Vertigo series. "

one of the greatest stories in comics

Published by Thriftbooks.com User , 13 years ago
I was turned on to Y The Last Man at work when I saw someone with the comic. I asked him what it was about and he told me. Being a fan of post-apocolyptica, I asked if it was any good. He looked straight into my eyes and said, "I don't read crap, man." If you looked at the guy, a stereotypical comic book/gaming nerd, you could tell he knew his stuff. I went home and bought all the available graphic novels, 6 at the time. I have no regrets. I have since lent these novels to about a dozen people and they all loved it. This comic perfectly blends action, comedy, sci-fi, romance, and drama together to create a world where women rule.

Published by Thriftbooks.com User , 14 years ago
The best way to relay my surprise and ultimate devotion to this particular work is to describe my initial reaction to a summary by a friend who'd read it. She said, "It's about the world after all the men but one dies." I thought to myself, well, it certainly will be a more peaceful world. Brian Vaughn makes an incredibly valid arguement to the contrary and I had to reflect on myself and how I would handle a world where 90% of pilots, truck drivers and other male-dominated professions were simply wiped out and resources were scarce - let alone the inner demons we would have to face and conquer. This is a magnificient work, remarkable in its scope and depth of understanding of human nature. I highly recommend it.

Y: The Last Man is Rad

Published by Thriftbooks.com User , 15 years ago
I'm not sure that I could tell you what Y's core values are, but I feel like they stray from them a bit as the series progresses (parhaps redefined). Moot point though, this is well worth a read. Get them all. I made a decision to own them after I read a friend's first issue....

Published by Thriftbooks.com User , 16 years ago
Brian K. Vaughan's submersive and addictive Y: The Last Man never ceases to amaze, and this eighth collected volume is no exception. Kimono Dragons finds Yorick, Agent 355, Dr. Mann, and Mann's lover Rose in Japan in search of Yorick's kidnapped monkey Ampersand, who may very well be the key to the fate of mankind. However, also on the trail of Ampersand is the skilled ninja Toyota, who drops her own bombshell as a missing link to what caused the plague is revealed, all while Yorick and 355 deal with a schizo pop-star who has her own plans for the poor monkey as well. As the volume comes to a close, we get a glimpse of Dr. Mann's past, including her tumultuous relationship with her parents, as well as a look at the past of Israeli soldier Alter, and a shattering conclusion that will leave you salivating to see what happens next. Vaughan's storytelling is still excellent, and he manages to reveal just a little bit at a time without going overboard with the suspense. Pia Guerra's artwork does the job as well, which is what veteran readers would come to expect. All in all, Y: The Last Man still manages to be the most addictive Vertigo series since Preacher, and you'll be left begging to see how it all ends.

Everything Starts Coming Together

Published by Thriftbooks.com User , 16 years ago
Brian K. Vaughan never fails to amaze. Whether it be with his political superhero book Ex Machina, his subversive teen book Runaways, his original graphic novel Pride of Baghdad, or his original hit, Y: The Last Man, he sure knows how to tell a great story. Though the previous arc, Paper Dolls, wasn't as strong as some of the other Y stories, it still had its good points, and as we learn in Kimono Dragons, Yorick's decision at the end is having some repurcussions. This story, as well as the two stand-alone backstory issues that accompany it, are amazing, and may be the best Y since the Safeword arc. That isn't to say that the stuff in between wasn't good, it was, but Kimono Dragons and Safeword are just that good. Yorick Brown, the last man on Earth, Agent 355, his bodyguard, Dr. Allison Mann, a geneticist, and her lover, Rose Copen, have finally arrived in Japan. They have been journeying here ever since Yorick's pet monkey Ampersand was stolen by a ninja named Toyota. This was mere moments after learning that Ampersand was the key to returning men to the planet after the plague. Upon their arrival, Yorick and 355 go to search for Ampersand while Dr. Mann and Rose track down Mann's mother. Allison believes that it is no coincidence that the port city that Ampersand was delivered to was the same city that she grew up in with her parents. Yorick and 355 have to deal with some Yakuza members on their way to getting Ampersand back, with some pretty humorous results (let's just say that the new leader of the Yakuza is a pretty funny look at a certain aspect of pop culture). We also see Yorick and 355 begin to show feelings for each other, which could complicate things between Yorick and Beth, his girlfriend/fiancee who is waiting for him in Paris. Speaking of people named Beth, Hero, Yorick's sister, has successfully brought Beth II and Beth, Jr. (Beth II had a one-night stand with Yorick about a year prior to the events of Kimono Dragons) back to the "Hot Suite" where the first male born after the plague is being held until he can become innoculated against the plague. Their victory is short-lived due to the arrival of a character who has caused numerous problems for our heroes in the past. Elsewhere, the encounter between Allison, her mother, and Rose leads to some interesting revelations about Allison and the plague itself. Following Kimono Dragons are two one-shot issues that show some of the history of Allison and Alter Tse'elon, an Israeli militarist who believes that it is her duty to bring Yorick back to Israel so that the Jews may be repopulated while the Muslims die out. The two stories are very interesting and show us some of the characters' motivations for doing what they have done throughout the course of the series. As I said, Vaughan never fails to impress, and knowing that the wait for the next trade will be about six months is excrutiating. There were some good cliffhangers in these stories, and from what has been said a
Trustpilot
Copyright © 2022 Thriftbooks.com Terms of Use | Privacy Policy | Do Not Sell My Personal Information | Cookie Preferences | Accessibility Statement
ThriftBooks® and the ThriftBooks® logo are registered trademarks of Thrift Books Global, LLC