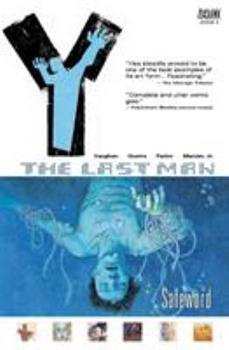 WINNER OF THREE EISNER AWARDS After a devastating plague, Yorrick Brown is the last man left alive in a world of women. On the run from Amazon extremists who would be happy to see him dead, his friends leave him in the care of Agent 711. But 711 is not the tragic woman she seems to be and Yorrick is propelled into a drug-fuelled nightmare of blood and sadism. Collects issues #18-23 of the runaway hit Vertigo series by Brian K. Vaughan (EX-MACHINA,...

Published by Thriftbooks.com User , 15 years ago
I'm a big fan of Brian K. Vaughan's comic book work, so I jumped on this series recently, and although I loved the first story, I found myself disappointed by the second, and while the third trade did win me back over, I still felt like this book wasn't quite living up to my expectations--until Safeword. Both stories contained in this trade are excellent; the characters feel more real than ever here, and both stories have extremely serious ramifications for the future of the series. Pia Guerra is not an innovator, but her work is definitely solid enough to sell me on these stories. She knows facial expressions and anatomy, and considering the level of the writing, that really is enough. Absolutely recommended.

Gets better with each passing volume

Published by Thriftbooks.com User , 16 years ago
Safeword, the fourth collected volume of Brian K. Vaughan and Pia Guerra's smashing Vertigo title Y: The Last Man, continues the journey of Yorick Brown, the last man on Earth. When his pet monkey Ampersand (who is the only other living male mammal left on the planet) gets sick, Yorick's cohorts Dr. Mann and Agent 355 drop him off with 355's old partner, the sexy Agent 711. What happens next tests everything that Yorick has come to known, and he makes a startling discovery about himself in the process. The second storyarc finds Yorick and co. stuck in the desert and up against a crazed militia who have their own agenda. With tough choices and revelations abound for everyone involved, the direction that the series will go in is shaped more clearly now than ever before. Like previous reviews have stated, Safeword is easily the most mature of the series so far, with Vaughan's storytelling getting better panel after panel. Pia Guerra's artwork serves it's purpose as it has before, but it's Vaughan who steals the spotlight here. If he keeps this up, his name will be in the same breath as modern day masters Ennis, Ellis, Morrison, and maybe even Moore.

Published by Thriftbooks.com User , 16 years ago
So now things are getting a little weirder. As if being the last man on the planet (along with your pet monkey) and having half of the women want to kill you for what you represent, having a quarter not want you at all because they are playing for the other side, and having the last quarter want to jump your bones wasn't weird enough, let's make it weirder. We now get into Yorrick's head and man, it isn't pretty. Vaughan, the genius that he is, dials it back for a second or two in the area of action and the usual one-thing-after-another-after-another plotting that comic book series fall victim to. Instead he takes a moment to dive into the head of the main character and give us some reasons for some of the crazy crap that he does. It's great, peeling away his layers, because when he's whole again, Yorrick is a totally different character. Trust me, you'll know what I mean when it happens.

Put To The Test

Published by Thriftbooks.com User , 16 years ago
Things never seem to go right for Yorick Brown, the last man on Earth. Nearly two years ago, a mysterious plague wiped out every mammal with a Y chromosome except for Yorick and his pet monkey Ampersand. Along with the mysterious Agent 355 and geneticist Dr. Allison Mann, the trio is going to California in order to get to some research that could be mankind's last hope. After the mysterious events of the mini-arc known as Comedy & Tragedy, 355 and Dr. Mann leave Yorick in the care of one of 355's former colleagues, Agent 711 (remember that the numbers are pronounced Three-Fifty-Five and Seven-Eleven, making for a great one-liner) while the two ladies go to a hospital to help the wounded Ampersand. Of course, something unexpected occurs, and Yorick has to question certain things that he once believed. We also get a glimpse into the history of the Brown family, including a hint at a traumatizing event in his sister Hero's past. Furthermore, yet another militant women's group makes an appearance, though this one has a much different political agenda than ones previously seen. The end leaves Yorick in a strange place emotionally that will be very interesting to explore in future issues. As usual, Brian K. Vaughan doesn't disapoint. The story remains engaging, and the humor is great, while the overall dark tone remains. The art is great, and may even be improving. If you haven't started Y yet, get on it soon!

Published by Thriftbooks.com User , 18 years ago
I'd heard great things about Y: The Last Man and picked up an issue (I think #28) to give it a shot. The premise seemed pretty far fetched to me, and the issue left me a bit confused. The dialogue and art were OK, but I decided not to keep up with it. Then I started with the first TPB, and COULD NOT GET ENOUGH OF IT!! You really have to start back at the beginning with Yorick, or else you won't know who Agent 355, Dr. Mann, Hero, or Ampersand (sp?) are--and you should! I went through all four tpb's in two days! This is a journey saga, and as we travel with Yorick across the country we find that his friends, allies, and enemies are ALWAYS more than they seem and despite my earlier concerns, always very well written. Vaughan does an excellent job of pacing the story with physical action, mental intrique, and pschological probing. The dialogue that I thought was "OK" before, I now see as natural and envigorating. He teases us, releasing information at just the right time--in this tpb we learn why Yorick isn't just bedding down with every women he meets. It's not an earth shattering reason, but somewhat unexpected and yet profoundly believable. I've heard this series is supposed to last sixty issues. Although I'll be sad to see it go, the fact that this story has a beginning, middle, and end certainly shows. The focus is refreshing, and adds a level of realism. I'm not sure how much you'll enjoy book 4 if you pick it up cold, but try the first tpb (or the comics) and I guarantee you'll still love the story by issue #23 (where this one ends).
Trustpilot
Copyright © 2022 Thriftbooks.com Terms of Use | Privacy Policy | Do Not Sell My Personal Information | Cookie Preferences | Accessibility Statement
ThriftBooks® and the ThriftBooks® logo are registered trademarks of Thrift Books Global, LLC