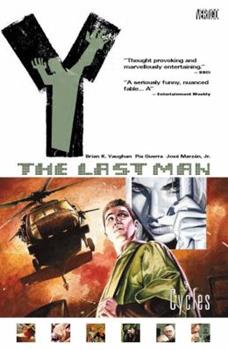 WINNER OF THREE EISNER AWARDSAs Yorick Brown, the last man on Earth, begins to make his way across the country to California, he and his companions are forced to make an unscheduled stop in Marrisville, Ohio a small town with a big secret. Collects issues #6-10 of the runaway hit Vertigo series by Brian K. Vaughan (EX-MACHINA, RUNAWAYS) and Pia Guerra."

I can't wait to read more

Published by Thriftbooks.com User , 16 years ago
Each TPB I read leaves me wanting more. I can't wait for the next one. Interesting story, good art, funny and my girlfriend likes reading them too!

Published by Thriftbooks.com User , 16 years ago
From the excitement of the first volume, we move into the second. Everything is building and building and the action is twice as intense and gut wrenching as in the first volume. The town that they go to is great and the characters are fantastic. I totally love Yorick. He's just a regular guy stuck in a crapstorm of craziness! This is a great series that just keeps getting better. The books are addicting. Someone on the back of Book Two that says something about the comic being like a good TV show. if TV was this good, no one would ever leave the frickin' house!

This is a man's world

Published by Thriftbooks.com User , 18 years ago
"Y the Last Man" is consistently an excellent comic, and I think that along with 100 Bullets, it's Vertigo Comics' next big thing. The setting of "Cycles" is the world after a disease has killed all male mammals from the unborn to grown humans and animals. The only known surviving males are Yorick brown, struggling escape artist, and his pet monkey Ampersand. "Cycles" goes on to show more reactions to a world without men and how society restructures itself. At the start; we find that pretty much all pilots are dead now and our protagonists are trying to barter their way onto a train to get to California. This sets up Brian Vaughan's clever, charming dialogue. For the most part, the dialogue is all perfect, it is often funny, when that's what Vaughan wants; or it can show a more serious side. Pia Guerra's art is very good, it reminds me of the artwork in "Preacher". Not to say that Y the Last Man is as objectionable as Preacher is to some, but the style and facial detail reminds of Steve Dillon's work in "Preacher". Also, "Cycles" comes with like 8 pages of Guerra's sketches in the back, which are nice. My favorites are early pencil drawings of Yorick's bodyguard Agent 355, it's interesting to see how different the final product is. I reccomend "Cycles" highly based on the great story as well as the spiffy artwork, It's short, although the next trade paperback "One Small Step" is supposed to come out very soon which means we can all get our fix of Y the Last Man.

Published by Thriftbooks.com User , 19 years ago
This is the second story arc in the adventures of Yorick. He is literally the last man on Earth - all other men died in a second of mysterious causes. The story, which seems to be the ultimate male fantasy, is really a thriller boarding on horror. It's not a dream - it's a nightmare!There are women, who consider the death of men to be the will of Mother Earth, and so they'll do anything to get the planet rid of the last one, then there are Israeli commandos, and ... oh, no, I won't spoil it for you!Considering the premise, the tone of the story itself is surprisingly realistic, and the dialogue is superb.This story is better in the collected form - this is the way to read Y, and not to read a chapter once a mounth.Compaired to the first story arc, this one is less dramatic, but mostly because it deals with a smaller cast and scale. There are talks of "Y - The Last Man" movie. I, personally, think it's too early to make a movie, 'cause the series has just started. And it shouldn't be a movie - a series of movies, or better a TV series.
Trustpilot
Copyright © 2022 Thriftbooks.com Terms of Use | Privacy Policy | Do Not Sell My Personal Information | Cookie Preferences | Accessibility Statement
ThriftBooks® and the ThriftBooks® logo are registered trademarks of Thrift Books Global, LLC