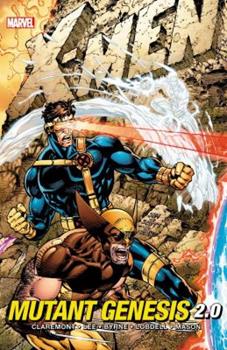 A fresh take on a classic saga! Magneto's future, Wolverine's past - and the X-Men in between! Magneto acquires a new army, the Hand revives an old enemy, and it's up to the X-Men to stop both. But from Asteroid M to Weapon X, Marvel's mightiest mutants are getting brainwashed wherever they go! Featuring mysteries from Wolverine's history, the first flashback appearance of Team X -plus Acolytes, ninjas and much more! COLLECTING: X-MEN (1991) 1-7

Published by Thriftbooks.com User , 13 years ago
This Tradepaperback collectes the first 7 issues of X-Men Volume 2. The first arc is a 3 parter with Magneto and nuclear weapons, the second is with a new villain named Omega Red and is linked to Wolverine's past. the best thing about this book is Jim Lee's art, when you open up a comic book, it should like this, bright colors, amazing art, and muscle-bound characters. A must-have for any X-Men fan.

Best of the best, remineds me of better times for the X-Men

Published by Thriftbooks.com User , 19 years ago
P>This is the last and probably bet X-Men stories every. It combines the talents of Chris Claremont (before he was fired and X-Men fell apart) and Jim Lee when he was still letting his art flow naturaly. Hands down Lees bet are work ever! And if you know Lee that's saying a lot.<p>The story focuses on the X-Men Blue Team. Cyclops, Wolverine, Rouge, Gambit, Phylock, Beast, and Jubilee. The battle their old foe Magneteo who is back with a vengence to take over the world.<p>The second part of the story introduces us to a trio of Wolverine's arch villians, The Hand, Sabertooth, and Omega Red. The conspire together with one of Wolverine's evil creators to unlock Wolverine's seceret past and get more than they bargined for. <p>This is the X-Men at their absolute best just before they sank to their absolute worst. <p>Lee's artwork is breath taking.

Published by Thriftbooks.com User , 19 years ago
X-Men: Mutant Genisis is Chris Claremont and Jim Lee's finest work for Marvel Comics! This X-Men tradepaperback the famous story arc of X-Men#1-7 originally published in 1991! This is the famous story Arc where you see the X-Men split into two teams. One is calles the X-Men gold team and the other is called X-Men Blue team. The focus of these issues is the the X-Men Blue team consisting of Cyclops, Wolverine, Psylock,Rogue, Gambit, and Beast! Magneto and his Accolytes are out for Revenge against Mankind! The X-Men must stop Magneto before he destroys the Earth and all Human life.This is also Chris Claremont's last 3 issues of X-Men! He left the book after a 17 year run on Unccany X-Men. Jim Lee draws all the issues and co-plots the rest. These issues has the first apperances of X-Men characters Omega Red and Maverick!It also tells more about Wolverine's origin as Weapon X! This is the famous X-Men story arc that made Jim Lee famous! Buy it! A Great X-Men Tradepaperback!

Published by Thriftbooks.com User , 19 years ago
..."Mutant Genesis" reprints (in color, not b & w) the first seven issues of the second series X-Men (now renamed New X-Men) from 1991. Claremont writes the first three issues, and John Byrne and Jim Lee write the remaining four. Lee provides pencils for all.The the 3-issue story "Rubicon" represents Claremont's finale as he left the series he'd written for 14 years and made the highest selling comic EVER. It ranks among his best writing (which is saying a lot). The story revolves around Magneto's quest for vengence against Charles Xavier and Moira MacTaggert, involving nearly thirty years of X-Men history, including the effects of the Holocaust, prejudice, nuclear proliferation, and the effects of anger on the human soul. Highly recommended.If you enjoy this trade, I would recommend Claremont's work in:"X-Men: God Loves, Man Kills"; "X-Men: Vignettes"; and the four volumes of Essential X-Men b & w reprints.
Copyright © 2022 Thriftbooks.com Terms of Use | Privacy Policy | Do Not Sell My Personal Information | Accessibility Statement
ThriftBooks® and the ThriftBooks® logo are registered trademarks of Thrift Books Global, LLC