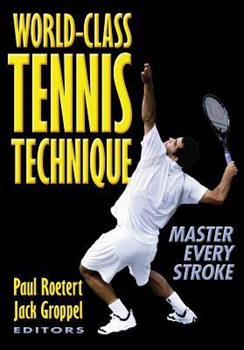 Let the game's most brilliant players and coaches teach you World-Class Tennis Technique ! You'll find the most up-to-date information, based on solid scientific principles and presented in a practical, easy-to-understand manner. No other book on the market offers the level of world-class instruction and expertise found here. World-Class Tennis Technique is written by some of the world's top experts in biomechanics, tennis technique, and coaching,...

An Scientific Treatise on Tennis - dry and with some holes

Published by Thriftbooks.com User , 20 years ago
An all-star cast was called to write this authoritative primer on modern techniques. There are contributions from Jim Loehr, Dennis van der Meer, Howard Brody (tennis physicist), Vic Braden, Jose Higueras (reknown clay court coach), Bruce Elliot (Australian biomechanist), Don Chu (strength and conditioning expert), etc. The graphics are quite good and the reseach is based on the latest in sport science. Some problems do exist, however. It appears that the book is written for the serious tennis player in addition to coaches and teaching pros. However, the use of language is dry and scientific in many areas. Even advanced players may find it too theoretical. Practical implications are often up to the reader to draw. The use of high-speed multiple-frame photography isn't exploited enough considering the resources of the contributors and editors. Disappointing sections are the backhand (Braden and Jack Kramer) -- barely an effort considering it follows a brilliant section on the forehand (Crespo and Higueras), volleys and overheads (van Fraayenhoven & Schapers) -- which attempts to cover too much in little details as possible (except for approaches), and tactics and technique (Herbst and Patrick McEnroe) -- also didn't seem very well thought out. Best sections include Revolutionary Rackets (Stan Smith and Brody) --which is written for the player(!understandable and enjoyable!), Kinetic Chain (Kibler and Van der Meer) -- well thought out analysis, court surfaces (Coe and Miley, ITF), specialty shots (Paul Dent and Patrice Hagelauer) and the forehand. A must for the serious coach/pro and a good buy for the serious player if you like reading analyses. Comparable in science for the teacher is the German Tennis Association "Tennis Course" series. Roetert and Groppel's book, however, is a rarity in that it analyzes top pro modern techniques rather than giving a template for beginners and intermediates as most books do.

An excellent primer on the major strokes and much more

Published by Thriftbooks.com User , 20 years ago
The full color, high speed sequence shots have already helped my game. The in-depth analysis of each sequence preceding each major stroke have given me the confidence to go to the next level. I play for fun but it's nice to surpass those that I never thought I could beat before. This book spends a chapter on such topics as forehands, backhands, volleys ( learned alot here), serves and returns, and the tactics of the overall game. From there, there are discussions on the kind of player you are, how to analyze your game and those you play. Other topics include what works for you and what to do when your game isn't working. I certainly don't win all the time, but since purchasing this book my serve speed and has improved greatly and I've only lost once. That may have been due to the breaking of yet another string on my serve in the third game. Looks like it's time for a new racket as I've broken my fourth string since May. There is a discussion on racket designs in Chapter 2 of the book as well.

Published by Thriftbooks.com User , 20 years ago
In World-Class Tennis Technique: Master Every Stroke, Paul Roetert and Jack Groppel have drawn from some of the world's top experts in biomechanics, tennis techniques, and coaching to provide the aspiring or practicing tennis player with a comprehensive guide covering every aspect of the game as it relates to technique. An in-depth analysis of each stoke is enhanced with full color sequence photographs. If you are an amateur player seeking a professional level of mastery, or an aspiring tournament contender, give a careful reading to Roetert and Groppel's World-Class Tennis Technique!
Trustpilot
Copyright © 2022 Thriftbooks.com Terms of Use | Privacy Policy | Do Not Sell My Personal Information | Accessibility Statement
ThriftBooks® and the ThriftBooks® logo are registered trademarks of Thrift Books Global, LLC