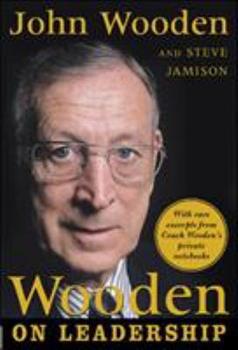 Wooden on Leadership: How to Create a Winning Organizaion

by John Wooden and Steve Jamison

A Wall Street Journal Bestseller A compelling look inside the mind and powerful leadership methods of America's coaching legend, John Wooden "Team spirit, loyalty, enthusiasm, determination. . . . Acquire and keep these traits and success should follow."--Coach John Wooden John Wooden's goal in 41 years of coaching never changed; namely, to get maximum effort and peak performance from each of his players in the manner that best served the team. Wooden...

Published by Thriftbooks.com User , 16 years ago
To me, the words "Wooden" and "leadership" are synonymous. On and off various basketball courts, first as a player and then as a coach, John Wooden demonstrated talents, skills, and qualities of character seldom found in a single person. He led others by example but also by the force of his convictions. After reading this book, some may conclude that he was "idealistic,' "naive," "corny," "old-fashioned," etc. Not so. In fact, he was a strict disciplinarian with non-negotiable values who had zero-tolerance of attitude and behavior he perceived to be selfish, rude, unsportsmanlike, or indolent. He invariably accepted his team's defeat with grace but was saddened - sometimes so angered he exclaimed "Goodness gracious sakes!" -- by anything less than a best-effort, not only by his assistant coaches and players but also (especially) by himself. It should be added that, according to those who know him best (including coaches of opponents' teams), he has always been an exceptionally thoughtful, caring, and decent person. What we have in this volume is an on-going narrative provided by Coach Wooden during which he shares everything he learned about achieving and then sustaining excellence. Of special interest to me is the series of "On Wooden" commentaries which include those provided by Kareem Abdul Jabbar, Denny Crum, Gary Cunningham, Gail Goodrich, and Lynn Shackleford. Although the specifics vary from one to the next, all of their authors agree on Coach Wooden's greatness both as a coach and as a man. One of the most interesting anecdotes is provided by Eddie Powell, who played on the South Bend Central High School varsity team which Wooden coached. The bus was about to depart for a game against Mishawacka High School. The co-captains were absent. Coach Wooden asked the driver what time the bus was scheduled to leave. "6 p.m., Coach, same as usual." "Well, what time is it?" `It's exactly 6 p.m., Coach Wooden." "Well, that's what my watch says, too. I guess it must be 6 p.m." "Let's go." The bus left without the two most important players on the team. One of them was the son of a vice principal at South Bend Central, "the kind of a person who could create job problems for Coach Wooden. From that, we learned that Coach wasn't kidding: Be on time." Indeed meet all commitments to the team and especially in the classroom and to one's family. "We found out later that the co-captains had skipped our game with Mishawaka to go to a dance." Presumably everyone who played on U.C.L.A. basketball teams also soon learned that, when he explained what he expected of them, "Coach wasn't kidding." With all due respect to his extraordinary success in basketball, I am convinced that John Wooden could have become a great leader in almost any other profession. Fortunately, as Steve Jamison observes, "The qualities and characteristics he possesses and has taught to his teams -- those good habits and how you teach them -- are available to everyone." Hope

The Evolution of Coaching Near-Perfection

Published by Thriftbooks.com User , 17 years ago
Unless you have never seen a college basketball game, you probably know quite a bit about coach John Wooden and his success at UCLA. Several excellent books have attempted to capture the essence of his coaching philosophy. All of those books made you admire coach Wooden and want to emulate him. But you ended up feeling like you were dealing with a saint who emerged full formed from a clam shell. How could a mere mortal follow his foot steps? Wooden on Leadership takes a revealing look at how that philosophy evolved, the mistakes he made along the way, how he corrected those mistakes and the regrets he has today. A high point for me came from seeing his notes during the years that the philosophy evolved. You still feel like you are dealing with a saint, but a saint who (like Paul when he was Saul) started out with some imperfections that you may recognize in yourself. I came to appreciate several dimensions of the Wooden philosophy that I hadn't understood before. Here is my new learning: 1. Focus on helping each player become the best they can be in contributing to the team, and help the players understand how they can and are contributing to the team. 2. Attract people with good values who are eager to improve in team contributions. 3. Set a good example. 4. There are no little things. Everything is important. I hope that anyone who ever coaches children's or school sports will read this book and be encouraged to become a better leader. Even if you coach fencing, you can learn a lot from this book!

Published by Thriftbooks.com User , 17 years ago
When sports figures write books on leadership, they often take the easy route - athletic metaphors, game time war stories, tenuous applications of sports experiences to business. This refreshing book breaks through such superficial ideas as decisively as a dunk by Kareem Abdul-Jabbar in his prime. Ten-time national champion UCLA basketball coach John Wooden - generally considered the greatest college basketball coach to ever hold a clipboard - delivers a leadership book that stands alone at center court. Remarkably, none of Wooden's players recall him urging them to win. Instead, he urged them to do their best every moment. Take care of the process, he says, and the result will take care of itself. To Wooden, preparation is pivotal and every detail matters. Despite his almost obsessive focus on getting the little things right, Wooden believes in balance and consistency. He avoids extremes. Wooden's long-time collaborator and co-author Steve Jamison does a wonderful job of portraying, through the coach, a range of qualities, philosophies and characteristics that apply to every field. We strongly recommend this book to managers and executives who want to know how to lead people to victory in every game.

Coach Wooden is an inspiring teacher

Published by Thriftbooks.com User , 17 years ago
Coach Wooden, the legendary basketball coach outlines his pyramid for success in this wonderful book. I read a lot of business and self help books, and rarely make notes. I used my highlighter pen on almost every page in this great book. I absolutely suggest you read this wonderful book, endorsed by Stephen Covey, another wonderful author. I also strongly suggest Optimal Thinking: How To Be Your Best Self, also endorsed by Stephen Covey, because it provides the key to making the most of any circumstance, and life.

Published by Thriftbooks.com User , 17 years ago
You will not find a better, sounder book on leadership than this one and yet... it will not gain the wide readership it deserves. Wooden's emphasis on selflessness, self-control, making the team the star is an idea whose time has come and gone and sorely needs to come back. This is a great book that will be read by the people who need it less and ignored by the people who need it more and who WE need to have read this for everyone's sake. I think every player that has been touched and shaped by John Wooden owes it to him and themselves to "pay it forward" to the people in their lives. Wooden's message needs to go on after him.
Trustpilot
Copyright © 2022 Thriftbooks.com Terms of Use | Privacy Policy | Do Not Sell My Personal Information | Cookie Preferences | Accessibility Statement
ThriftBooks® and the ThriftBooks® logo are registered trademarks of Thrift Books Global, LLC