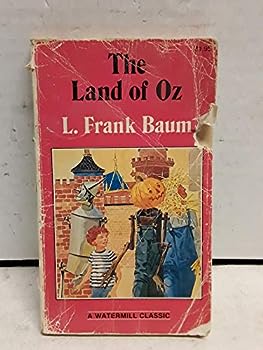 The Land of Oz

Book 2 of L. Frank Baum's immortal OZ series, in which young Tip runs away from his guardian, the witch Mombi, taking with him Jack Pumpkinhead and the wooden Saw-Horse, and flees to the Emerald City where he learns the incredible secret of his past.

Published by Thriftbooks.com User , 16 years ago
Young Tip (actually Tippetarius) has lived his whole life with the evil witch Mombi. But, when the witch announces that she will turn Tip into a statue, he decides that it is time for him to flee. Having stolen Mombi's Powder of Life, which will animate anything it is sprinkled on, Tip heads off to the Emerald City. But, when the city is conquered by an army of rebellious girls, Tip begins an adventure with Jack Pumpkinhead, an animated saw-horse, the Scarecrow, the Tin Woodman (who is now nickel-plated), and a highly magnified and thoroughly educated woggle-bug. The rightful queen of the Emerald City is missing, stolen away by the Wonderful Wizard, and it is up to Tip and his friends to find her. Following the success of his 1900 book, the Wonderful Wizard of Oz, L. Frank Baum (1856-1919) received many letters from children demanding a sequel. Well, in 1904 he broke down and published this, the second of what turned out to be a long list of Oz books. What makes this book stand out from the rest is the simple fact that it is the only one that does not include Dorothy Gale, the lost girl from Kansas! Overall, I found this to be a charming and entertaining little book. As you would expect from a sequel to the Wonderful Wizard of Oz, it has a cute little, nonsensical storyline that is a lot of fun and thoroughly kid-friendly. If you have a young reader, then I guarantee that they will love this great book. I give it my highest recommendations!

Published by Thriftbooks.com User , 17 years ago
Land of Oz by L. Frank Baum is the first sequel to the wizard of oz and yes I agree that it is in many ways superior to the original. Yes we have no Dorothy and no Lion but the story about Tip, the wooden horse, the tin man and the scare crow is absolutely fabolously written and I found myself more enthralled with this story since many ways it is a better written story with more charachter development and a plot that truly creates a page turner and ones does not want to stop reading since the story is stupendous. I love the illustrations and I can not wait to continue the stories about the land of oz.

The Marvelous Land of Oz

Published by Thriftbooks.com User , 20 years ago
This is the second novel in the wonderful Oz series. It's about a young boy named Tip. Tip's guardian is a witch. Tip is threatened to be turned in to stone, so Tip tries to run away. He builds a Scarecrow that comes to life. Thus begins an awesome book. It's very funny, the chracters are great. This is a classic. just as good as the first.

Published by Thriftbooks.com User , 20 years ago
Although he was never to enjoy the success he had with his first Oz book, Baum sure tried hard with this one (the second in the series). I like this far better than the first, more famous work. It starts off, if I remember from reading it 30 years ago, with Tip living in a cottage deep in a forest in Oz. The witch who keeps him is set on turning him into stone, so Tip must escape. This sets up a whole series of wonderful adventures and interesting characters. The Pumpkinhead character is my favorite. If only someone like Tim Burton would get a hold of this and turn it into a film, then maybe the whole Baum Oz series would get as much recognition as say the Potter series is now getting.

Published by Thriftbooks.com User , 24 years ago
This book is as they call it now "Da Bomb". I think it is the best L. Frank Baum Oz book.It's got plenty of action and suspence while having a sort of merryness. This is the perfect book for oz fans.If you liked the Wizard Of Oz you will end up liking this one better. Enjoy the book!
Trustpilot
Copyright © 2022 Thriftbooks.com Terms of Use | Privacy Policy | Do Not Sell or Share My Personal Information | Accessibility Statement
ThriftBooks® and the ThriftBooks® logo are registered trademarks of Thrift Books Global, LLC