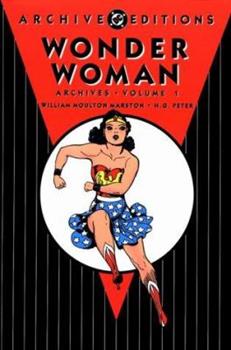 The earliest adventures of the most enduring heroine of all time are featured in this hardcover collection, from her beginnings as an Amazon Princess to her 1940s career battling the power of the Nazis. These celebrated, quirky stories made an indelible impression on all those who grew up with them.

Published by Thriftbooks.com User , 16 years ago
My introduction to Wonder Woman (or I should say, who I "thought" was Wonder Woman) came in the form of the weekly TV show starring Lynda Carter. As a child in the mid 1970s, I was not only bewitched, but suddenly I was hooked on superheroes and don't think I missed a single episode of WW or the many other superheroes who made their prime time debuts in the 1970s and 80s. For this 2nd grader, there was no one who topped the esteem that Wonder Woman held in my favor. But like many things from childhood, Wonder Woman the superhero faded into my conciousness for many a decade...until THIS book! Presented here are the first Wonder Woman tales and what a treat they are to behold! Not only could Wonder Woman fight the Nazis, stop a blacmarket milk trade, uncover unfair working conditions for shop girls-- she could also kick some serious butt and save her beloved Steve Trevor from all harm(who seemed to ENDLESSLY get himself in to pickles) and by the end of the issue not bat an eyelash! Considering the cultural atmosphere of War-time America, this was quite a feat and what a role model Wonder Woman would served for young children. Yes, Wonder Woman was an early Gloria Steinem with brains, beauty, braun and a kicky pair of boots! Interestingly, the producers of the TV series in the 70s, at least for a little while, remained very faithful to the nature of these first comic books. A smart decision on their part. After reading these marvelous adventures, I decided to check out Wonder Woman of the 21st Century at the local comic shop. I'm sorry wasted my $2. The WW of 2005 is a sorry testament to the original icon presented in the pages of this marvelous CD Archives edition. Gone is a lot of the whinsome yet strong storytelling. Its replaced with a Uber-Wonder Woman whose overly "pumped up" muscles and attitude leave nothing to the imagination and sense of "wonder" the early vision so effortlessly supplied. What we have in the early books is the REAL Wonder Woman...perhaps the one that is best left to the casual reader's memory. The DC Archive Editions are easily one of the most enjoyable and accessible ways to rediscover the comics (something I hadn't given at thought to since 1983!). Presented in beautiful color, on superior quality papers these volumns are "built to last". They are truly archival in every since of the word. These time capsules will not only become welcome additions to your library, but are destined to become terribly addictive to read. Worth every penny for certain! But first and foremost they serve as a reminder to all grownups of simpler pleasures that could be had for a couple of quarters with some change to spare....once upon a time.

Published by Thriftbooks.com User , 22 years ago
I always wondered why Wonder Woman made it to the top with Superman and Batman for over 60 years? This collection shows why. Wonder Woman is powerful and fights injustice. The stories are fun. It's hard to put them down. We see Wonder Woman fight Nazis, the Japanese that were allied with the Nazis, and social injustice such as over priced milk. The art is childish but adds a flavor of fun. It is also interesting to see the great changes that Wonder Woman made in a year: her costume, the magic lasso, and even her origin. These are some of the greatest comic stories that I have ever read.
Copyright © 2020 Thriftbooks.com Terms of Use | Privacy Policy | Do Not Sell My Personal Information | Accessibility Statement
ThriftBooks® and the ThriftBooks® logo are registered trademarks of Thrift Books Global, LLC