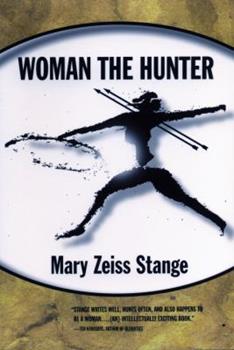 Over two million American women hunt. By taking up weapons for the explicit purpose of killing, they are shattering one of Western culture's oldest and most firmly entrenched taboos. The image of a woman 'armed and dangerous' is profoundly threatening to our collective psyche--and it is rejected by macho males and radical feminists alike. Woman the Hunter juxtaposes unsettlingly beautiful accounts of the author's own experiences hunting deer, antelope,...

Over a decade later..

Published by Thriftbooks.com User , 12 years ago
Over a decade later, it's nice to reflect how far culture has come since this book has come out. More and more women are interested in producing their own food and preserving food traditions. Because of that, they are having to confront death and the realities of the human place in the ecosystem. I am glad Mary paved the way for women not afraid of this. Many women I know are farmer-activists and some have received positive press in The New York Times and other media outlets. Slaughter, hunting, and butchering workshops led by them are selling out in places like New York City. Most people are positive and joyful about these- happy to engage with their food and to not be dependent on industrial monocultures. The post-vegan feminist culture has come to the fore. When I lead butchering workshops, many of the attendees are women who formerly subscribed to the vegan ecofeminist paradigm. Most have abandoned it because of their health suffering, but others have told me that that after volunteering on farms or at nature preserves they simply couldn't subscribe to a philosophy so alienated from nature. I often recommend this book and Lierre Keith's The Vegetarian Myth in their journey to heal their bodies and embrace humanity's econiche. Thank you Mary for providing this resource for celebrating the joys of hunting and our place in the universe.

The Tyranny of Feminism

Published by Thriftbooks.com User , 18 years ago
I enjoyed "Woman the Hunter" very much. I read through the reviews and decided to write this because I am so tired of "feminists" appointing themselves as the official "women" who can tell the rest of us outside the privileged world of academia how to live. I believe that Stange makes some excellent points. But I think what is more important is the responses she has drawn in these reviews. They are predictable which is to say that since I first encountered feminism in the early 70s, it hasn't changed: same old, same old. First attack Stange's writing, then her scholarship, then her nerve for affiliating hunting with "feminism." And the ever classic, oppression of any type is really the same and conveniently defined by what your narrow definition of feminism is. How many times must feminists invent the wheel, and yes, mention a connection with hunting and rape without mentioning the study. Yawn... Why is it that feminism is so completely out of touch with women? If I have a complaint at all about Stange's book, it is that she doesn't invent a new term for women who refuse to be told by women academics how they should live their lives. And what they should or should not enjoy because it could, God forbid, imitate men. Instead of men defining us, now women are defining us? Read the book. If you really think about the book, you may well enjoy the book, as I did. You don't have to let the "tyrannical feminists" know that you can think for yourself or that you can decide for yourself how to spend your time. I no longer call myself a feminist because I am my own person, a woman, a woman hunter, a woman who takes responsibility for the meat she eats. This book made me think about my long tradition as a woman hunter. I have been with groups of women hunters, and we have shared our reasons for hunting and our love of the sport. The feminist reviews reveal that the writers don't really know any women hunters. Perhaps they would rather we sit in a classroom and talk about women's creativity, but for me, I'll discover my "feminism" on a deer hunt, in the woods, with another woman hunter, matching our wits against an animal we will clean and prepare for our table. You see Stange is right; there are many ways to be a feminist, but the most radical way is to free yourself from the politically correct notion of what academics tell us a woman should be. After all, what's the difference: men telling us to stay home or feminists telling us to stay home?

Published by Thriftbooks.com User , 22 years ago
We are not that far removed from the time when we were all hunters, and Mary Zeiss Stange understands that better than most. How refreshing to read a book on hunting by a feminist! Too often we hear "Men are hunters and women are gatherers." This book shows how the hunting spirit lies within us all.Stange is an observant hunter and a skilled writer. She understands the hunt, a very rare perception in this world of post-modern nitwits who don't understand where their meals come from, let alone the basic life cycles.I doubt this book's biggest detractors have even read it. Read it with an open mind, and learn to see the world through the only eyes we possess...the eyes of hunters.

Published by Thriftbooks.com User , 22 years ago
As a scientist I find this book an excellent addition to the field of contemporary cultural anthropology. I have not encountered such a thoughtfully written book on the subject of female hunting. The author provides a critical analysis of our current myths and taboos about "Woman the Hunter". She particularly clearly challenges the "eco-feminist" viewpoint of hunting as a distructive, violent, male-only activity to be shunned by enlightened females. Dr. Zeiss Stange arques that this "eco-feminist" analysis is actually a rehashing of the old chauvinistic argument that females are too weak and helpless to kill there own food. This controversial book should definitely be required reading in Women's Studies and Ecology.

Published by Thriftbooks.com User , 22 years ago
Whether individual men, women, academics, or feminists like the fact,human beings are predators. Whether we stalk our own food or allow others to provide it for us is an issue that is one of the focal points of the controversy surrounding the sport and psychology of hunting. Currently there is virtually no scientifically credible psychological research on the reasons why people continue to hunt. Certainly polemics are readily available from animal rights activists and others who fail to take into consideration that wearing leather, eating meat raised for the purpose of food, or maintaing a vegan diet which ultimately results in more animals losing their lives through the destruction of their own natural hunting grounds to human cultivation of edible plants, are actions not necessarily on a higher, simply a different, moral plane. To eschew any form of hunting would so entirely eliminate sources of food and clothing (for to take the argument that humans should not use animals as a source of food to its logical conclusion would also require the position that animals are not superior to plants, thus plants should also should not suffer from exploitation) that it would require that critics make their comments sitting naked at the computer. The reality is that the largest growing group of hunters is women. In the anecdotes Stange employs to introduce each chapter, nonhunters who are willing to keep an open mind are introduced to the powerful emotional and bonding aspects (among hunters) of the hunt, as well as the importance of the strong ethical principles and discipline required of hunters. This book is an honest, rigorous investigation of the various myths which have been employed to maintain the image of women as somehow purer and morally superior to men in the feeding of their families, and takes an important look at the lengths to which ideologies will go to interpret ancient evidence through the more ideologically convenient lens of 20th century stereotypes. A truly excellent book.
Trustpilot
Copyright © 2022 Thriftbooks.com Terms of Use | Privacy Policy | Do Not Sell My Personal Information | Accessibility Statement
ThriftBooks® and the ThriftBooks® logo are registered trademarks of Thrift Books Global, LLC