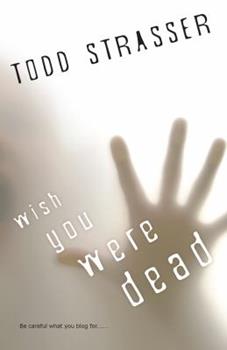 Wish You Were Dead

(Book #1 in the Thrillogy Series)

I'll begin with Lucy. She is definitely first on the list. You can't believe how it feels to be in the cafeteria and turn around and there she is staring at me like I'm some disgusting bug or vermin. Does she really think I WANT to be this way? I hate you, Lucy. I really hate you. You are my #1 pick. I wish you were dead. The day after anonymous blogger Str-S-d wishes the popular girl would die, Lucy vanishes. The students of Soundview High are scared...

A Great Suspenseful YA Thriller!

Published by Thriftbooks.com User , 11 years ago
Wish You Were Dead was a great suspenseful thriller for Young Adults. I was hooked from the first page and couldn't wait to find out who the kidnapper was. I enjoyed the characters, especially Madison, she never stopped thinking about her friends while others moved on. She was very strong because I would probably be an emotional wreck if three of my friends went missing. After the teens were missing, the book took a turn with a series of shocking events that shook Soundview High. By the way, I really like the name 'Soundview' it has a nice ring to it. Anyways, my favorite part is when I read the dialogue of the kidnapper. It seriously was eerie because it truly captured the creepy persona of a kidnapper. And the big shock of all was the ending, the kidnapper turned out to be a character that I didn't expect. And so, I really liked this face paced thriller and recommend it to you all, I can't wait for the next book! Overall, it wasn't scary, just taught me you should always be nice to everyone, or else one day someone just might hold a vendetta against you.

Creepy in many ways

Published by Thriftbooks.com User , 11 years ago
Taken from my blog: [...] Okay- this book was creepy. In many different ways was it creepy but I really liked it- partly because of that. The premise is great- a different take on the whole who done it kind of thing and what I really enjoyed about this book was how many different aspects of current times it incorporated. The use of blogs- something that seems innocent and just gets it out there- and how just saying anything can come back at you was a big portion of this entire premise. The movie Juno came in to play a few times, as did the idea of how gated communities and towns with low crime rates aren't always as safe as they seem. This plot kept me enthralled from start to finish. This is a pretty quick read- made faster by how much I wanted to find out what happened. With each additional missing student, my curiosity grew. The majority of the actual story is told in Madison's perspective, but it is broken up by the blog posts that are in some way tied to everything along with the perpetrator's voice, telling the reader what is happening with the missing students as though they are talking to them and responding without ever giving away whom it is. Strasser painted several different people as potential suspects, at least in the eyes of Madison. Who to trust and who to avoid were big themes, made worse with the increased fear that came with each missing student. He threw out many postulations, all with strong reasons to be true. I never had any sure line to follow- I didn't have any more insight into things than Madison did was something I definitely enjoyed. I was as curious and wondering as she was. I really enjoyed the tight nit community this book was set in. Of course there were the usual high school cliques, the popular people and the jocks, then the outcasts and the losers but everyone pulled together when things got rough. The parent's concern for their kids as well as the others actually was a big feature that I thought helped run things along even better. Protect your own first but worry about the others too- basic survival instincts that are more prevalent in some areas than others and that was almost refreshing for me. Madison was a well done character. She was popular but different than the others- something that came more into play than I initially thought. She developed well, given the situation she was in and there were only a few instances where I questioned what she was doing and why. The ending tied everything up, weaving it together nicely without any of it actually feeling like it was done just for the sake of being able to do it or to ties up the loose ends. The ultimate motivation and driving force behind this was a unique take on something often done and the specific way it was carried out was even better. Something I can completely see- despite how inhumane it was. Overall, I give this one 4 stars. It was gripping, it had a pretty strong lead character, and it was a unique take on an often done general story lin

Wish You Were Dead by Todd Strasser

Published by Thriftbooks.com User , 11 years ago
This book got better as every page flew by. I was originally a bit against the book because it felt like we were being set up for this one guy to be the one behind everything and there wasn't really a mystery to it. Toward the last fourth of the novel, more people became suspects, but it still felt a bit off. When the reveal happened (well, ok, a little before since I did some sleuthing around that point), I was shocked and it was a great twist, if maybe a little cliche (I've seen it happen at least once before in another book, but I may be forgetting other instances). The novel is very suspenseful and scary, and is told from different viewpoints. Madison is the main character and the one we see the most of, but there's also the Str-s-d blog entries, various omniscient scenes, and the crazy ramblings of the killer. This was a difficult book to put down and when the climax was happening, I was on the edge of my seat and shaking like crazy (not a good thing when you're at work and co-workers can see you, lol). It definitely exceeded my expectations and was a wild ride; Strasser definitely knows how to write a thriller and I'm eagerly waiting for the next two books in the series. I'm not sure what's coming next, whether it'll take place in the same town or be elsewhere, but I'm excited to see where Strasser will go with this!

Published by Thriftbooks.com User , 12 years ago
If you are looking for a good thriller, look no further. WISH YOU WERE DEAD by Todd Strasser has everything you're looking for. When a popular teen from a wealthy, gated community disappears right off her front lawn, everyone is scared. Then, when two more teens disappear within the same week, panic sets in. Madison has always liked being part of the "in" crowd, but she hesitates and tries to distance herself when they start bashing the less fortunate students in her affluent high school. When her friend, Lucy, disappears after being dropped off at her house by Madison and her Safe Ride partner, she feels guilty. The rules of Safe Ride state that the person being dropped off should be witnessed entering his/her home. Madison was pretty annoyed with Lucy and her better-than-everyone attitude that night, and when Lucy stubbornly continued to hang around on her front walk, Madison and Tyler just left her. Now Lucy is gone. Did she run off with her boyfriend? Is she just trying to scare everyone? Or was she kidnapped? When there is no demand for a ransom, people begin to suspect more sinister motives are involved. Madison is not the only one feeling guilty. The creator of a blog known as Str-S-d is having second thoughts about her actions. Frustrated with the ever-popular Lucy and her superior attitude, Str-S-d admits that she wishes her dead. Could someone have read her post and taken it seriously enough to actually kill the girl? And is it coincidence when Str-S-d expresses similar death wishes about the other two missing teens? Add in the attractive yet mysterious new student, Tyler, and the strange messages Madison keeps finding from someone known only as PBleeker, and the suspense builds quickly. Todd Strasser is at his best in WISH YOU WERE DEAD. It provides just the edge-of-your-seat action teens love. Happily, it appears to be the first of three similar stories. Can't wait to get a look at the next one. Reviewed by: Sally Kruger, aka "Readingjunky"

Published by Thriftbooks.com User , 12 years ago
Since the day I read Give a Boy a Gun, I've been a Todd Strasser fan. His writing is authentic and scary, sort of like that feeling you get when you are all alone and you think someone is watching you. You feel your hair standing up on your arms and little beads of sweat break out over your upper lip. "Is someone there? Hello?" His new novel, WISH YOU WERE DEAD keeps the chills coming. From the first chapter, Strasser's YA thriller sets us up for more scares than a Halloween haunted house. We cautiously turn the page ahead to the next chapter, readying ourselves for another shock. He makes sure the evil keep popping out at us, giving us fright after fright. WISH YOU WERE DEAD features a blend of four narrations: an anonymous teen's blog listing the kids she hates, a first person narrative by a nice girl named Madison from a wealthy community, a bit of omniscient narration, and strange ramblings from a possible psychopathic kidnapper. Strasser is able to pull off having this many different narrators through his talent as a writer and the use of font styles to indicate a change in narration. The main character, Madison, is losing her close friends, one by one, and is receiving strange emails and notes warning her of each impending disaster. To compound matters, she is attracted to the new guy in school, but is unsure whether he is involved in the disappearances or not. When Madison decides to take matters into her own hands, we cringe, knowing no good can come out of a choice like that. The pace is fast and the end is shocking. As I sat curled up in my chair at 1:00 am, wanting to finish it, I was wishing I had started it earlier in the day...it was so dark outside and only a thin screen separated me from the noise on the porch... Some language and violence, but nothing over the top for most teen readers. The themes of bullying, tolerance, and friendship are all ones to which students can relate. A perfect read for chill seekers...make plans to spend the wee hours of the night with this one.
Copyright © 2020 Thriftbooks.com Terms of Use | Privacy Policy | Do Not Sell My Personal Information | Accessibility Statement
ThriftBooks® and the ThriftBooks® logo are registered trademarks of Thrift Books Global, LLC