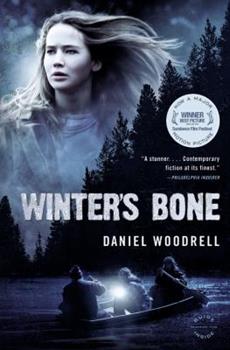 "The lineage from Faulkner to Woodrell runs as deep and true as an Ozark stream in this book...his most profound and haunting yet." -- Los Angeles Times Book Review Ree Dolly's father has skipped bail on charges that he ran a crystal meth lab, and the Dollys will lose their house if he doesn't show up for his next court date. With two young brothers depending on her, 16-year-old Ree knows she has to bring her father back, dead or alive. Living in...

Published by Thriftbooks.com User , 14 years ago
Why Daniel Woodrell is not a household name says much about literacy in America. Having read most of his books, I can't help thinking, Why don't more people know him? Why don't bookstores carry his novels? Why doesn't someone turn this book into a movie? Anyway, Winter Bones is one of his best. It is a novel about a young girl who is on a journey of discovery, a discovery not just about her meth lab cooker dad but about herself. It is a picaresque novel, much like Portis's True Grit. She finds "justice" at a cost, but her determination and heart, to keep her family from homelessness, makes her one of America's most down-on-her-luck, inspirational characters in contemporary lit. Woodrell fills his novels with great descriptions and dialogue. He creates characters whom you wouldn't want necessarily to meet, but are still intriguing, sympathetic and compelling. Great book! Great author! Read Winter Bones and all of Woodrell's books. Maybe the word will get out, so that authors like Woodrell will be more well-known and praised like a lot of less-worthy authors.

Published by Thriftbooks.com User , 15 years ago
Woodrell has definitely captured what it is like to live in a subculture that is so isolated from the bigger world around it. The Ozark area is such a paradox of beautiful lodges and resorts and, on the other hand, pockets of isolated, poverty-stricken rural poor. Woodrell's portrayal of the Dolly clan is, unfortunately, not unbelievable. Ree's search for her father who has skipped his bail reflects a parallel search for a better life; she doesn't know where to look for him and her only idea of a better life for herself is to join the Army. The effects that meth have had on the rural poor is devastating. That together with generations of family hardships, feuds, intermarriage, and poverty paints a pretty depressing picture. I live in Missouri and have just now discovered Woodrell. He calls his writing "Country Noir" which is truly an apt description. This isn't a pretty book, but it is an honest one and one that I would highly recommend for those looking to meet characters not found in most other writing.

First Ozark Noir for me

Published by Thriftbooks.com User , 15 years ago
Don't recall how this got on my put-on-hold-at-library list, but I am so happy it happened. Loved this book. Ree and extended family (really**** extended) are interesting, scary, wise, fit the Ozark hills and hollow stereotype and also blast it to smithereens. The writing is as thrilling as the story and that's an unbeatable combination. Plan to start with Woodrell's first and make my way through his oeuvre--not too fast, tho, want savor time! Absolutely adore when this happens--discovering a writer with an original voice, with a body of work already behind him/her.

a winner, but still champion

Published by Thriftbooks.com User , 15 years ago
Twenty years ago Jewel Cobb dragged a comb through his greasy, antique pompadour and in that brilliant moment Daniel Woodrell announced his intention to entertain a readership. Predictably Mr. Cobb did not survive that novel, Mr. Woodrell has gone on to publish eight of them and become a leading contender for the title of Most Underappreciated Writer in America (campaigning in the heavyweight division). It may be that the very voices decrying Woodrell's lack of popular acceptance are at least partly responsible for it. The laudatory reviews, and they are finally numerous, tend toward the use of adjectives like 'dark,' and 'bleak,' and, 'lyrical,' and these suggest literary heavy sledding, reading reminiscent of a high school English assignment. It must be conceded that Woodrell is a serious writer, a purveyor of social outrage and dismay at the human condition, but not a page of his work passes without something to laugh at, cringe from, fret over--in other words the vicarious experience that is the stuff of ENTERTAINMENT. In 'Winter's Bone' Woodrell continues to make good on his old promise. Though 'Bone' is not as consistently funny as some of his previous books it is a glistening showcase of an ever maturing and deepening compassion. America has no patience for her poor and feels it is in the poorest taste when the underclass is anything but invisible. Classism remains our most pervasive and acceptable prejudice. It is into the teeth of this nasty attitude that Woodrell flings the wonderful, large humanity of his people. Ree Dolly is the latest and most finely drawn of these Woodrellian characters. To read 'Winter's Bone' is to be instructed and ennobled, but really Woodrell means no harm by it. His trick, his art, is to make the hard lesson savory.

Daniel Woodrell is not to be missed!

Published by Thriftbooks.com User , 15 years ago
Daniel Woodrell is one of the more under appreciated talents in the genre. 'Give Us A Kiss: A Country Noir' was one of my favorite books of the late 90's. This book is a stunner; lyrical and earthy, violent and touching. The heroin is a wonderful, honest portrayal of the American heart and spirit.
Copyright © 2020 Thriftbooks.com Terms of Use | Privacy Policy | Do Not Sell My Personal Information | Accessibility Statement
ThriftBooks® and the ThriftBooks® logo are registered trademarks of Thrift Books Global, LLC