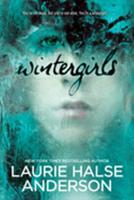 The New York Times bestselling story of a friendship frozen between life and death Lia and Cassie are best friends, wintergirls frozen in fragile bodies, competitors in a deadly contest to see who can be the thinnest. But then Cassie suffers the ultimate loss--her life--and Lia is left behind, haunted by her friend's memory and racked with guilt for not being able to help save her. In her most powerfully moving novel since Speak , award-winning author...

Published by Caley , 9 months ago
I paid for a hardcover book in very good condition. What I got was a hardcover book with someone's name written on the pages and a $1.99 price tag from Value Village still on it. Extremely disappointed. Do better.

Amazing Sight Into the World of Anorexia Nervosa

Published by Lexi , 1 year ago
This book shows what it is like to suffer from this kind of illness in an amazing way. It can put those who have never exoerienced it into the mind of an anorexic and tells a great story from her perspective.

Published by Thriftbooks.com User , 2 years ago
I loved this book some much that I finished it within less than a week.

Published by Thriftbooks.com User , 3 years ago
This is without a doubt, one of the best books I have read. I was skeptical because usually books don't portray EDs very well, but I found this book to be spot on about not only anorexia but also self harm and hallucinations. The ending is beautiful. When Lia finally gets help, she's doing it for herself and her family, not some random love interest. I get so sick of YA authors saying teenage love is this cure all and make it the reason a character suddenly does a 180. I'll definitely be reading this again in the future.

Published by Thriftbooks.com User , 12 years ago
This is the story of an adolescent girl suffering from anorexia. It details her weight obsession for her as well as others, her careful calorie counting, and even her troubled thoughts that lead to her eating disorder and her cutting. Anderson has not failed with this YA novel. Her past YA accomplishments have also broached difficult, socially taboo subjects (Speak, etc.), but I caution parents and teachers to read this book before assigning it to children. It is heavy subject matter, but the way the story unfolds and the insight into the main character's troubled mind are intense- they were even heavy for me! I live and work at a co-ed boarding school and deal with eating disorders, cutting, aggression, distorted body image, and so much more. I would have to be very sure of the maturity and emotional stability of a girl before suggesting this book. Wintergirls is a perfect glimpse into the mind of a girl whose actions are almost unimaginable. It also allows the reader to understand how perplexed her family is, how much her actions hurt them, and why they don't understand why she can't just stop killing herself. I suggest this book for any teacher, parent, or adult who regularly deals with the trials and tribulations of female adolescence. It will undoubtedly shed some light upon the pain and torture of all involved with eating disorders.

Published by Thriftbooks.com User , 12 years ago
There has been so much written about this book already, that I don't have much to add, except I want to give my two cents about this amazing book. I have read hundreds of books about eating disordors and I can honestly say that considering all the books I have read, this one has to be on the top my list of the best fictionalized book written on the topic. As a woman who has struggled with anorexia since preadolescence (which was many years ago), I have to say that Laurie Halse Anderson captured the mindset of anorexia in a young girl very accurately. Halse Anderson's writing style is absolutely intriguing and poetic. I have read other books written by her, and I am truly a great fan. Wintergirls is deep and disturbing, but at the same time it is very real. The book incapsulates the true hell that eating disorder's evoke in the lives of those who suffer from them as well as their loved ones. The only disappointment (if you could call it that) I have with this novel is that I thought it ended quite abruptly. I know the book could not last forever, but I felt the ending to be rushed. Up until the end of page 273, the story unfolded in a timely pace. In fact the book could've ended there on a very different and (for some) unsatisfactory albiet, realistic note. I am pleased however that it did continue. In fact one of the best passages (just one among many throughout the story) occured on page 275 where Lia accurately describes one great dilemma of the anorexic mindset: "I breathe in slowly. Food is life. I exhale, take another breath. Food is life. And that's the problem. When you are alive, people can hurt you. It's easier to crawl into a bone cage or a snowdrift of confusion. It's easier to lock everybody out." This is profound to me because in my own life I have often believed that anorexia is the one thing in my life that I have that no one can take away from me and it is the only thing I can rely upon in this cruel and painful world because people can always inevitablly hurt me. Anorexia does not betray me in my mind, yes it can kill me, and that is the ultimate price I will pay because nothing in this life comes for free, but for now it has and does keep me alive unlike any person can do. No one knows what living an eating disorder is like except those who are unfortunate enough to live in such pain, I admire Laurie Halse Anderson for spending the time, energy and research it took for her to write such a harrowing, important, and timely book--for someone to write such a book who has not personally been there--what she has accomplished is truly amazing. I am in awe of this author and her writing. This remarkable book I will keep all the rest of the days of my life and I will read it again and again. Thank you Laurie Halse Anderson for touching the lives of all who read this book, and shedding light on a disease that very few can understand.

Published by Thriftbooks.com User , 12 years ago
Before WINTERGIRLS came out, I was dying to read this book. I even won an advance review copy in an online contest, but after waiting a month for it to arrive, I learned it was lost in the mail. After a long groan, I succumbed to the urge to buy my own hardcover copy when it came out in stores. Note that I very rarely shell out money for new books when I could just as easily put the book on hold at my library and wait for a while. But for WINTERGIRLS, I couldn't wait. Why? First of all, I'd read some of Anderson's previous books, and I greatly admire her eloquently raw, realistic writing. Also, the premise behind WINTERGIRLS intrigued me, as my college studies at the time led me to examine body image and eating disorders in girls and women. I hoped WINTERGIRLS would help me understand the mindset of those people I had glimpsed on pro-anorexia and "thinspiration" websites. After having read the book, I think it did. Anderson unflinchingly plunges readers into the mind of Lia, forcing us to vicariously count calories with her, punish our bodies for eating too much, cut ourselves to feel control. I won't lie and say it wasn't disturbing, almost scary. Every time I picked WINTERGIRLS up, I read through as much as I could before I had to put it aside, and when I did, I kept thinking of Lia and hoping she would see what she was doing to herself. I wouldn't say Lia is a likable character, but I definitely don't think that's necessary for the creation of an intriguing protagonist deserving empathy. Anderson did a masterful job of making me feel angry, sad, and hopeful for Lia. Particularly through Lia's relationship with her little step-sister Emma, one of the people Lia can still show love for. Most of all, Anderson made me feel like I understood Lia. I can't say more about WINTERGIRLS without giving too much away, but I can urge you to read the book yourself. Anderson is a powerful voice in today's young adult literature, and this novel will, at the very least, keep you thinking long after you read the last page.

Published by Thriftbooks.com User , 12 years ago
I love Laurie Halse Anderson. Speak is one of my all time favorite novels, so to say I was excited to read Wintergirls was an understatement. I was excited until I realized what Wintergirls was really about: anorexia. Was that something that I wanted to read about. It sounded truly depressing and slightly disturbing. But as hard as it was to read this novel emotionally, I felt like it was even harder to put down physically. Anderson continues to impress my with her beautifully written novels. I've seen Anderson's writing described as lyrical and I have to say that I fully agree. And Wintergirls in no exception. Anderson's writing is almost hypnotizing, she has a way of explaining a situation thoroughly using as few words as possible. Genius. And it's so much more than writing, it's the characterization. Lia's character is so rawly displayed it's heartbreaking. I never fully understand the metal effects that an eating disorder can have, I marveled at a part of the text where Lia watches her dad eat.... and how she wishes she could eat like that. Aimlessly, automatic, effortless. For some reason that part really stuck out for me, and it was so simple. I'm sure this novel will make an impact and be discussed, maybe even more so than Speak. I can't wait to see what LAH has in store next.
Copyright © 2020 Thriftbooks.com Terms of Use | Privacy Policy | Do Not Sell My Personal Information | Accessibility Statement
ThriftBooks® and the ThriftBooks® logo are registered trademarks of Thrift Books Global, LLC