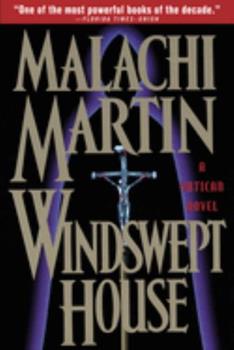 The Cold War has ended. With a scope and daring not possible until now, an unlikely international alliance of top-level political, financial, and religious interests sees the way clear at last to its ultimate goal: the establishment of a single global society. Utopia. These are men with nothing in common but immense power and a towering ambition for still more. With world unity and prosperity as their slogan--and with betrayal, scandal, and murder...

Published by tom regan , 2 years ago
Based on his Canadian interviews with Bernard Janzen, the Windswept novel is based on facts he witnessed in Rome.

This book changed my life!

Published by Thriftbooks.com User , 21 years ago
I must admit that I approached this novel with a great deal of skepticism. As a Catholic priest trained in the rather liberal mid-west, I picked it up to read only out of boredom. What I read changed my life. I found Martin's content and style thought provoking to the point that I was often angry--with him! But my anger turned to self-reflection. While I disagree with many of the author's preconceptions, I was nonetheless moved by his story and his conclusions--to the point that I was forced to re-examine my own understanding of the Church and priesthood. I pay this novel the highest compliment in saying that it truly changed my life and moved me to further conversion of heart. I believe that I am a better Catholic and a better priest because I have read it.

Only Time Will Tell.

Published by Thriftbooks.com User , 21 years ago
Malachi Martin was a great man. It's too bad he's no longer with us, especially since he can no longer go forthright in his quest to expose what is so wrong in our great Catholic Church and Vatican upper echelon. Was his death an accident or an outright slaying? I wish someone knew the truth, and also had the proof and courage to speak up. Whether this book is of fact or fiction, it is a portrayal of life, morality, and the ultimate test of faith and honorability. Maybe somewhere, someday, there will be (or already is) another great man such as Martin, whose love and courage will help to complete the final pages. As with this story, and the evil and hatred portrayed in it, the horrible molestations and sacrilegious rituals, only time will tell the final outcome and the truth. This was a fascinating book.

A Challenging but Necessary Book

Published by Thriftbooks.com User , 21 years ago
To all you rationalist, cynical, scornful readers who consider "supernaturalists" uneducated and ignorant you have finally met your match, and be forewarned you will indubitably become a fan of this pious yet brilliant priest-scholar. Combining sheer brilliance (Father Martin spoke 17 languages), with an uncanny intimacy with the divine (he also was an exorcist and a deeply spiritual man), Martin in Windswept House paints an astonishing picture of the Roman Catholic Church as an institution honeycombed and totally controlled by a satanic "superforce" which thwarts the will of the "Slavik Pope". There are some extremely shocking revelations in this book. One reason for the novelistic framework within which the novel is set is due to the astonishing charges leveled at beloved clerics such as Cardinal Bernardin and New Yorks John Cardinal O'connor. Without a doubt the circumstances surrounding the death of Malachi Martin do not smell of heaven and after reading this novel and investigating the condition of the church you will better comprehend the dynamic other worldly forces at work within christianity.

Published by Thriftbooks.com User , 21 years ago
In a radio interview, Malachi Martin said this book was about 85% true, and that he changed only the names and certain identifying particulars, for obvious reasons. In that same interview, Father Martin was asked if he feared for his life since writing this book. Father Martin said he did, but that he was too old to change his ways. Since then, Father Martin died under very suspicious circumstances. He was found unconscious and bleeding in his home with hard wood fragments inbedded in his skull. He was taken to the hospital, and eventually woke from his coma for an instant and said it was a murder attempt, but he didn't get a chance to see who did it. Then he fell back into his coma, received the sacrament of Extreme Unction, and died. If you read this book, you'll know why his enemies couldn't let him live. He blew the lid off the satanic cabal in the church, and he even went so far as to describe their black mass in detail. As a prolific excorcist, he knew a lot more than most about Freemasons, satanists, and the communists in the Vatican. The Church is in crisis, with a war between the good guys and the bad . . . and if you ever doubt it then just check the news and ask yourself why so many murders have occured recently in the Vatican.
Copyright © 2020 Thriftbooks.com Terms of Use | Privacy Policy | Do Not Sell My Personal Information | Accessibility Statement
ThriftBooks® and the ThriftBooks® logo are registered trademarks of Thrift Books Global, LLC