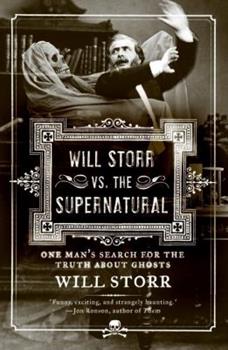 Will Storr vs. the Supernatural: One Man's Search for the Truth about Ghosts

Will Storr has done some seriously bizarre and otherworldly things over the course of his career as a journalist. But even spending an entire day with Ozzy Osbourne wasn't as frightening as when he agreed to follow Philadelphia "demonologist" Lou Gentile on his appointed rounds. Will Storr never believed in ghosts--but his healthy skepticism couldn't explain the strange lights and sounds he witnessed, and the weird behavior of the occupants of several...

Published by Thriftbooks.com User , 15 years ago
I have read many ghost story books, seen many if not all the documentaries on ghosts, poltergiests, demons, etc. . . But I have never read a book with such a refreshing perspective on ghosts than the one that Will Storr has wrote. This book is very well done, it makes you believe and question the reality of ghosts. Will plays both sides of the fence skeptic and believer. He takes you through the lives of ghost hunters, demon chasers and exorcist priests. Will shows both sides of the coin, laying the facts in front of you to let you decide what is real and what is not. If you are a believer in ghosts you will question your belief and if you do not believe you will suspect that ghosts exist. You have to get this book especially if you are not a believer in the paranormal, you will be amazed and quite entertatined by the notion of ghostly beings. I hope Will will write a sequel to his awesome ending. Write on Will!

Published by Thriftbooks.com User , 16 years ago
I read this book on holiday and found it a fascinating read. Will Storr is a journalist who stumbled across `the Supernatural' whilst doing an article for a magazine. He is neither wholly sceptical nor a firm believer, but rather takes us through a journey of discovery through a variety crackpots in both camps. Will never really offers an opinion on his subjects but prefers to let the various people hang themselves, or not as the case may be. Its testament to his writing that one often doesn't come to an overall opinion about many of the people he meets: that even if they do seem completely wacko they come across as very ordinary people like you and me: which of course (at least some of them!) are. One of the best things about this book is not the fear factor (and I'm ashamed to say I was a bundle of nerves while reading a lot of it) but the humour. His visit to the set of TV's Most Haunted is particularly funny, in an `isn't the Media so ridiculous' kind of way and Will's Brazen cheekiness at stealing the evenings programme of `Happenings' makes particularly funny reading. On the other hand this is not simply an exercise in poking fun at those who believe in ghosts. There were many passages that we're genuinely terrifying reading, and Will does a very good job of recreating the experience of fear, whether rational or irrational. What this book does is remind us that there is a lot in the world that we don't know about and often Scientists who believe that they know everything are often just as scary as Ghost hunters. Will's trip to the Vatican and his meeting with the Vatican's chief exorcist is a real eye opener and a fascinating piece of writing, and I recommend this book just for that piece alone.

One for the sceptics to ponder

Published by Thriftbooks.com User , 16 years ago
This is a balanced and thoroughly entertaining exploration of ghostly phenomena written by a journalist with an impressive profile in the UK. Storr is neither credulous nor so blinkered as to dismiss his subject matter out of hand. In fact, one of the delights of the book is an ongoing dialogue the author maintains between the part of him that wants to believe and the part that doesn't. In his quest Storr also covers a lot of territory, examining philosophical, psychological and scientific aspects of the supernatural as well as forming astute assessments of the characters he encounters. Both sceptics and those who believe that ghosts are real will therefore find much to delight and challenge them here. Best of all, Storr does not sit on the fence at the end but readers will be hard pressed to second guess his conclusions as they make their way through the text.

Published by Thriftbooks.com User , 16 years ago
I have read and thoroughly enjoyed several books on the paranormal over the years and `Will Storr Vs. The Supernatural', written by Will Storr, was no exception. It was one of those books that you start to read and then have difficulty putting down. In fact I had read it cover to cover in less than three days, despite working and being mum to a four-year-old child! Storr's narrative style of writing and investigative journalism have earned him comparisons with Louis Theroux and Jon Ronson. I personally found the book to be a fascinating piece of work. Thought provoking, to the point, balanced, well researched and in places his description of events had me laughing out loud! As a sceptic, he started his journey to disprove paranormal events and poke gentle fun at those who believe in them when he was sent on a journalistic assignment to follow a Demonologist in Philadelphia, USA. As events unfolded, he found himself being unable to debunk what he was witnessing and he became more and more convinced that there really was `something' out there. On returning home, he decided to try and explain these events for himself, so he delved into several different areas of the paranormal in an attempt to clarify things in his own mind. He takes part in investigations with various paranormal groups including the Ghost Club, he visit's Maurice Grosse at home, goes on set with Most Haunted Live, has coffee with sceptical psychologists, experiments with Ouija boards and dowsing rods and is exorcised by the Vatican's chief exorcist in Rome. He meets some very interesting and colourful characters along the way! Will Storr's assessment of events is fair and unpretentious. It will appeal to the believer or sceptic alike as Will keeps an open mind and evaluates each event in its own context. The book includes favourite UK investigation sites such as Michelham Priory and Coalhouse Fort. I particularly enjoyed the way Will involves the reader in his thought process but doesn't force his own view on you, merely suggests explanations and lets you, as the reader, draw your own conclusions. As a Council member of 'The Ghost Club' which is featured in the book I would like to congratulate Will on an accurate portrayal of the club - which incidently does use scientific methods and equipment during it's investigations; something that a previous reviewer has quoted wrongly. On that note I only have one thing left to say. More of the same please!
Trustpilot
Copyright © 2022 Thriftbooks.com Terms of Use | Privacy Policy | Do Not Sell or Share My Personal Information | Accessibility Statement
ThriftBooks® and the ThriftBooks® logo are registered trademarks of Thrift Books Global, LLC