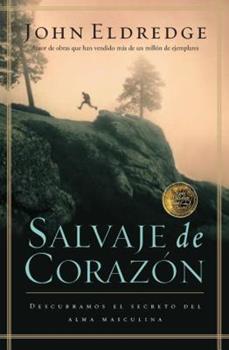 The condition of the book is not like new:

Published by Mary B. , 7 months ago
I know this is a great book so my review is not about the book but the condition the book is in. Every page is heavily marked in pen, all underlined, with notes written all over the book. It should have been marketed as acceptable, not as like new.

First Recommendation of a Read to a Guy (After The Bible)

Published by Elena A. , 11 months ago
Whenever I find myself taking with guys and end up speaking about who they are as men, how their minds work, or why they might react certain ways, this book always ends up in the conversation. I gifted one to a friend once and he came back months later thanking me because of how much it impacted his spiritual growth with the Lord into the man God had called him to be. Highly recommend this to young men. Honestly men of all ages can enjoy it but it is most enjoyable for those on a journey to understand more about themselves. As a woman reading it, I gained a better understanding of my brothers in Christ and my husband.

Published by DHall , 1 year ago
Was listed as “like new”, but inside cover was filled with handwritten notes.

God's design is right and perfect!

Published by HLB , 2 years ago
As a woman, I finally began to understand how God made men. No, not all are hunters, not all are risk-taking adventurers. However, the design of a man is so different from a woman that it behooves her to read this and begin to understand. Daughters should read this. Any woman should read this. I began to look for ways I was interfering with God's design and ways I could encourage God's design. Over many years, I've given this book away to the men in my life. All have been blessed by it. Read with the heart, not the mind. Men have been so emasculated by society that they and women need to be reminded that God's design is right and perfect!! We - women - need to learn how to encourage God's design in men.

Published by Thriftbooks.com User , 14 years ago
I enjoy every book or work book from John. He is tuned in to what mens hearts need to hear

Not An Owner's Manual (whew)

Published by Thriftbooks.com User , 15 years ago
If you are a woman, Wild at Heart will give you a peek under the hood of the men in your life. If you are a man, here's your chance to think about things that you would normally probably only ever talk about with a counselor or your best friend. How often have you stepped back and thought of what it means to simply be a man? The focus in most books is on roles: our roles as a spouse, in our career, as a parent. Most men are bored, he says. Most women are tired. According to Eldredge, men have three basic desires: adventure, a battle to fight, a beauty to rescue. I was all set to dislike this book and assumed it would be full of generalizations and bromides. Sure, there are generalizations, but the conversation has to begin somewhere. Again and again he emphasizes that he's not promoting some He Man image and again and again he says that God is the source of true masculinity. A large chunk of the book talks about the wounds men have. He says he has never met a man that does not have a wound. He says that most of the healing that has occurred in his own life is the result of spending time with his best friend. He talks about how his three boys often seek "snuggle time" with him. Eldredge has counseled many men, has had more deep conversations with men than I could ever hope to have in several lifetimes, and for this reason alone his insights are worth considering. He gives many brief glimpses into the lives of some of these men. He also touches on problem areas in his own marriage but avoids sordid tell-all details in his stories. Unlike most marriage books, he doesn't make an idol of marriage and emphasizes that men must offer strength to their wives, not draw strength from them. Utimately they must draw their strength from God. Fathers take a hit in this book. Fathers are the one that deliver their son's wound and fathers are usually to blame for the wound in their daughters, he says. Obviously a man's desires come with responsibility, and the potential to cause damage. This book isn't an owner's manual. It is refreshingly free from To Do lists and formulas. By simply acknowledging that these basic desires exist, and that somewhere under the hood is a wound that needs to be healed, you can look at the men in your life and let the wheels start turning and slowly begin to fill in the blanks on your own.

Published by Thriftbooks.com User , 21 years ago
John Eldredge's WILD AT HEART is one of the most refreshing and radical books that I have read. Why are so many men unhappy, un-fulfilled, in jobs they hate, and in marriages that are dead? WILD AT HEART seeks to answer those questions and restore the passion and God-given masculinity that so many men in today's world, and church, are missing. Some wrongly criticize WILD AT HEART, believing Eldredge is offering up macho, dim-witted masculine bravado, or they believe that this work will be a free pass for men to leave marriages in the dust on a search for lost dreams. Eldredge will have none of that, and says himself in the book that such men are "deceived about what it is they really want, what they are made for." Don't be fooled by the various criticisms that ignore Eldredge's real meaning. A real man's desires are shaped by the Lord.Instead, WILD AT HEART is about restoring a Godly dream in the soul of a man. A desire to truly be a man, rather than a softened-neutered-nice-but-restrained-guy that the world has somehow dictated that Christian males should be. Nice men may be socially acceptable but in creating them we have snuffed out the very fire that God would have us fan in our pursuit of Him.This is an attempt to re-kindle that flame. To restore the three longings that are at the core of each man: a battle to fight, an adventure to live, and a beauty to rescue. Eldredge's arguments are firmly planted in Biblical principles, as well as his past personal experience. His writing style is very easy going, and he uses a lot of illustrations from popular culture, which makes the reading fun. I believe this book is an awesome wake up call to the church. For too long men have weakened themselves by ignoring our God-created passions. WILD AT HEART shows us how to restore them, and challenges us to take the right risks and live the adventure. It may be a bit scary (after all, did God give Abraham a risk-free offer on his call to leave Ur?), but there's no other way to reach the real fulfillment that God would have us find. I'm not a big fan of "men's books," but this is one that I am so glad that I did not miss. You shouldn't either. FIVE STARS.

An Essential Read For Men...and Women

Published by Thriftbooks.com User , 21 years ago
Following closely on the heels of his magnificent *Journey of Desire*, John Eldredge has written the "men's book" of the ages. In addition, female readers will not only gain insight into masculinity but will discover much about themselves and how God - and their men - play a role in their own personal dramas.Much will be said and written about this book, but one aspect that merits particular emphasis is Eldredge's uncanny ability to discern from the play of children the immense "Story" that God has placed humanity in - a story filled with heroes and villains, damsels in distress, sacrifice, and a happily everafter. The author demonstrates to the reader how little boys and girls innately understand the power of (and need for) a "battle to be fought, an adventure to be experienced, and a Beauty to be won." Such is the life at the heart of the Christian gospel. After all, Jesus himself said regarding children, "of such is the kingdom of heaven." Another key tenant of the book is that men and women must go to God individually, and not to each other, to gain validation. Eldredge stresses that true masculinity is "bestowed" from father to son. He poignantly explains, too, how Christ can take up the "initiation" of a wounded man into the fulness of masculinity (a special highlight is his inclusion of Ezra Pound's forgotten poem "The Goodly Frere", which offers an engagingly different picture of Jesus). Along the way Eldredge summarily debunks the "precept and principle" philosophies (which includes Promise Keepers) that have unwittingly robbed the Christian faith of its vitality. No "twelve steps" here - the focus is on life, not formulas. Filled with humor and remarkable frankess, this is a heart-warming challenge to join God in a wild, gut-wrenching, but ultimately triumphant battle.
Trustpilot
Copyright © 2022 Thriftbooks.com Terms of Use | Privacy Policy | Do Not Sell or Share My Personal Information | Accessibility Statement
ThriftBooks® and the ThriftBooks® logo are registered trademarks of Thrift Books Global, LLC