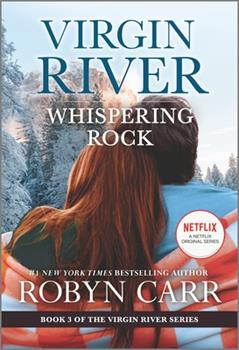 (Book #3 in the Virgin River Series)

Welcome back to Virgin River with the books that inspired the hit Netflix series... Virgin River became a safe haven for Sacramento prosecutor Brie Sheridan after she nearly lost her life at the hands of a violent criminal. Though tough and courageous, she has some fears she can't escape. LAPD officer Mike Valenzuela was badly wounded in the line of duty. When he agrees to become Virgin River's first cop, he does so knowing it's time he settled down...

Published by John , 3 years ago
Very interesting story line. Keeps you reading till it's done.

Published by Thriftbooks.com User , 15 years ago
Virgin River Midwife Melinda Monroe has come to Virgin River to try and recover from the senseless murder of her husband. The change from the city certainly comes as a huge surprise and if that isn't enough, she finds herself hopelessly drawn to retired Marine. Jack Sheridan. Although Mel finds that Jack awakens part of her that she thought was gone forever, she's conflicted by the feeling that she's being unfaithful to the husband she adored. When circumstances force Jack and Mel into a marriage, can she overcome her feelings and give her heart to Jack completely? When I was at RT I returned to my room one night and found Virgin River in a gift bag with a cookie on my bed. I was startled to say the least. With everything going on I ate the cookie and put Virgin River into my carry on luggage with a thought that maybe I'd read it on the plane. While in flight I found myself totally absorbed in Mel and Jack and I couldn't get enough of Virgin River. As soon as I returned home, I immediately put the two next books in this trilogy on pre-order, I had to have them as soon as possible! Shelter Mountain John Middleton, also called Preacher by his friends, has worked with his friend, Jack, in Virgin River since he retired from the Marines. He's closing the bar one rainy night when Paige Lassiter and her three year old son come in. It quickly becomes apparent to Preacher by the bruises that Paige is trying to hide, that she is on the run and he and his friends in Virgin River rally around Paige and her son determined to protect her. Paige thought she'd never feel safe again after the hell her husband put her through. Everyone in Virgin River has gone out of their way to make her and her son at home; especially Preacher. She's never met a man like him before and little by little she allows herself to open up and begin a romantic relationship with him. Preacher never really saw himself as a family man, but Paige and her son have him thinking differently than he ever has before. However, when Paige's ex-husband shows up, can Preacher and the residents of Virgin River protect Paige from a madman? The second book of the Virgin River Trilogy was just as wonderful as the first. Preacher and Paige seized my heart from the first chapter. I practically stayed up the entire night to finishing reading Shelter Mountain because I just couldn't quit until I turned the last page. Whispering Rock After being severely injured in the line of duty, LAPD officer and Marine reservist Mike Valenzuela found himself in Virgin River and somehow agreeing to be the town's first police officer. Brie Sheridan's brother, Jack, has made his home in Virgin River along with his wife Mel so it's no surprise that Mike and Brie find themselves spending time together. Brie's husband devastated her when he left her for her best friend; she'd never had any warning that anything was wrong. It's not until Brie is the victim of a savage assault that Mike and Brie truly become close. Br

Published by Thriftbooks.com User , 15 years ago
Ms Carr presents a wonderful storyline with real characters you want to care about.I hope there are more to come. Want to see what happens with Mike, Brie, Preacher and Paige. A romance for Paul and Vanni?? Please continue. Deserves 10 stars....Hated to see this trilogy end.

I so love this author!!

Published by Thriftbooks.com User , 15 years ago
After a shooting left him disabled and unable to do the job he so loved, Detective Mike Valenzuela came to Virgin River to regroup. Finding sanctuary in small town, Mike was able to start healing. Though married and divorced twice, Mike begins to realize what is missing from his life when he seems his friends with their wives. Seeing their contentment, Mike can only hope that he will one day feel the same. He hopes that he can convince Brie Sheridan, Jack's sister to take a chance on him. His hopes are dashed when Brie is brutally attacked in her home. Brie Sheridan thought her life was near perfect. With a husband she adored and a job she loved, Brie felt like she could do anything. Then her husband left her for her best friend and she lost the first case of her career. When she is brutally attacked by the man whom she couldn't put away, Brie comes out a different woman. Having panic attacks and nightmares, Brie has no idea how she'll ever get any normalcy back in her life. WHISPERING HEIGHTS is the third in the Virgin River series. After seeing Brie in the previous two books, it is shocking to see her as a victim. Carr did a spectacular job of depicting Brie as a believable victim. She really showed how a tragedy like that affects not just the victim, but the whole family. Jack struggled with his inability to help Brie cope, which in turn affected his relationship with Mel. There were several more storylines introduced with new characters as well as characters that we've briefly met. I am really looking forward to the next installment in this series. Carr is now on my auto-buy list!

Published by Thriftbooks.com User , 15 years ago
Robyn Carr is a new author for me and I have just finished her Virgin River Trilogy. The three books chronicle the lives and loves of various residents and incomers to the village of Virgin River, their highs, lows, frustrations, achievements and relationships. I live in a small village myself so I appreciate how she draws together these various strands and shows just how interdependent people in small, isolated villages can be. Living this way often means that you are very close to your neighbours but, particularly as in this third instalment, you can't escape the influences that come from outside: the drugs, crimes, national affairs (in this case Iraq) that sometimes cause tragedy in paradise. The plots in these three books are tightly woven and there are funny, happy, sad and frighening episodes in them all. I don't want to go over the plot for this book because, although it could stand alone, it seemed to me to be a transitional book because it brought to conclusion the issues facing some of the previous characters and introduced new ones to us. It also kept a few off stage, waiting, no doubt, for a reappearance. It's not often I wish a trilogy was more than that - rather I'd like it to be a series that would carry on a little further and I think that perhaps Robyn Carr has set up the makings of further stories involving some of the characters in this book. I recommend these books very highly. I found them satisfyingly good reads and read them quickly, one after the other. Excellent portrayals of small town life with likeable, well developed characters.

Published by Thriftbooks.com User , 15 years ago
This book continues the stories of many of the favorite characters introduced in the previous books "Virgin River" and "Shelter Mountain" and adds a few memorable new ones. Former Marine and restaurant/bar owner Jack Sheridan and his midwife/ nurse practitioner wife Mel are now building a huge new house for their growing family. Best buddy, former Marine and now chef John "Preacher" Middleton and his new bride Paige are running Jack's restaurant and are desperate to have a baby of their own. But the main focus of the book is the tender love story between Jack's former Marine buddy Mike Valenzuela and Jack's little sister and Sacramento attorney Brie. Brie suffers a horrible trauma and with Mike's help comes to Virgin River to heal emotionally. With Mike's patience, devotion, understanding, and love, he helps Brie to trust and love again. There are some subplots in the book; the most significant ones being a teenage serial rapist that former cop Mike has a hand in investigating, and also a sad turn when another Marine buddy is killed in Iraq, leaving behind a distraught pregnant wife and a best friend from Oregon who both grieve him. (Possibly a set-up for a future book?) A lot of detailed everyday life is told in this book (births, deaths, celebrations, etc.)--it makes you feel as if you know these characters and the town of Virgin River personally. I loved all three books equally-it would be hard to pick a favorite. They all brought tears of sadness and joy to my eyes. These were probably the best books I've read so far this year! I do suggest reading them in order for the most enjoyment. (Virgin River, Shelter Mountain, Whispering Rock) Highly recommended--5 stars!
Trustpilot
Copyright © 2022 Thriftbooks.com Terms of Use | Privacy Policy | Do Not Sell or Share My Personal Information | Accessibility Statement
ThriftBooks® and the ThriftBooks® logo are registered trademarks of Thrift Books Global, LLC