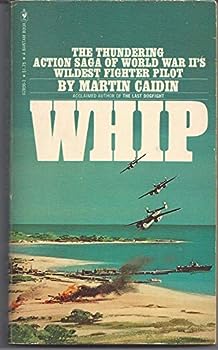 This description may be from another edition of this product. WHIP breathes will all the action and pace and accuracy that made THE LAST DOGFIGHT such a tremendous success. He tells this tale of the men and machines that made war in the air with undiminished...

Published by Thriftbooks.com User , 11 years ago
as usual, Martin Caidin has lost nothing in the art of a great read. In terms of today, the plot is a bit thin in parts, especially around the japanese incarceration area but otherwise, Glad I read it!

Published by Thriftbooks.com User , 14 years ago
First up, Martin Caidin is a prolific author with solid credentials (over 80 books published, including Cyborg - which was turned into "The Six Million Dollar Man" TV series). More lately, he's been writing techno-thrillers of one sort or another. "Whip" was one of his earlier novels, written after "The Last Dogfight", another outstanding Pacific WW2 airwar novel. He's got quite a gripping style of writing, very good at describing the planes, the flying, the conditions and in building a picture of the main character(s) that's believable. He's not an outstandingly great novelist, but he's an excellent craftsman and any book he wrote is going to at least be well-written. "Whip" is better than well-written, it's a minor classic of it's kind. "Whip" Russel is a Captain in the US Army Air Force in 1942, commanding a squadron (the 335th Bombardment Squadron) of eleven B25 Mitchell bombers. His squadron are the elite, tasked with "special" missions against the japanese. The novel starts of with their arrival in northern Australia for refitting, paints some historical background for a couple of the main characters and then returns to the air war as the squadron launches a series of missions against the Japanese in Papua New Guinea and the Bismarck Sea. The 335th was apparantly based on a real US bomber squadron from the war, the scene-setting is very realistic, partilcularly if you know anything about conditions in Papua New Guinea and the fighting that went on there between the Aussies and the Japs. Great descriptions of the bombing raids and of the flying, as well as the conditions of the bush airstrips that they flew from. All in all it's a book that you'll enjoy if you like well-written and soundly-crafted novels of the air war in the Pacific in WW2. There's not many that are better than this one.

Published by Thriftbooks.com User , 16 years ago
WHIP is Whip Russel, the hero of this excellent WW2 novel. He is an unforgettable character - real hellraiser and fearless bomber pilot who takes huge risks in confronting the Japanese. The Americans are trying to stop the Japanese advance in the South Seas and they construct a secret base from which to launch attacks. There is drama between Whip and his old friend, Lou Goodman, and Japanese military characters are portrayed as well. Martin Caidin authored over 80 books, both fiction and non-fiction, on military, space and science fiction subjects and was a pilot himself so he knows the subject matter expertly. It is hard to put this book down - I loved it.

Published by Thriftbooks.com User , 19 years ago
If you like read exciting, action-packed, suspense filled books, you will just love Whip. It is an awesome read for anyone looking to reveal the mysteries of what goes on within airplanes and crews in aerial combat. It will make you think about a lot of things while leaving you craving the next page. I love to read war related books. I have never flown in an airplane before, and this book made me feel like a pilot. It fills you with detailed descriptions and on-the-edge-of-your-seat scenes. It makes you question and think about your life- how fast it could end and how you live it. Everyone wants to life their life to the fullest and Whip further pushed me to that urge. I highly recommend this book for anyone who enjoys an older book that will still leave you breathless with the mysteries of aerial war-fare.
Copyright © 2020 Thriftbooks.com Terms of Use | Privacy Policy | Do Not Sell My Personal Information | Accessibility Statement
ThriftBooks® and the ThriftBooks® logo are registered trademarks of Thrift Books Global, LLC