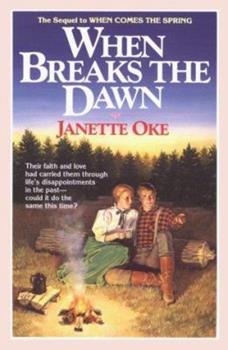 When Breaks the Dawn (Canadian West)

(Book #3 in the Canadian West Series)

Elizabeth Delancy and her husband, Wynn, a mountie, must rely on their faith to see them through hardships, when Wynn is sent to a new posting.

When Breaks the Dawn

Published by Thriftbooks.com User , 12 years ago
When Breaks the Dawn is the third novel in Janette Oke's Canadian West series. I found that this book was much improved over the second in the series and just as good as the first. This installment starts out exactly where the second book left it, at the trader's and his wife's return to the settlement with much needed supplies. Unlike the other books however, this one covers several years instead of just one year. Elizabeth has largely adjusted to living life in the frigid North and with her friend Nimmie starts a school for the children of the settlement. While it does not catch on quickly she finds a few willing students to learn all she has to teach. One of these in particular, a little girl named Susie, actually lives with Elizabeth and Wynn for awhile and gives them a taste on what it is like to have children. Susie wouldn't be the only child they would take care of in the book however. They also adopt a baby from a man who's wife has died and spend a whole year with him, learning to love them as their own. Sadly, this does not last for very long. In this book as well is a slight description of an action scene. Wynn must go out in the cold to track down a bootlegger and murderer. While we are not introduced to the scene firsthand, he relives it for Elizabeth when he arrives back home. I was actually surprised to find this in the novel as most of the books by Oke I have read have very little conflict between person and person rather than person and elements. As far as plotlines go there isn't really a set plotline for this novel. It more just chronicles their life over about 3-4 years and how they survive. If I were to say the book had anything resembling a plot line, I would more say it had a theme; Elizabeth's infertility. A big part of the book is written about Elizabeth's feelings and actions at being unable to conceive a child. It was written with a lot of emotion and having never experienced those issues myself as of yet I can't say whether they were accurate descriptions of the emotions involving infertility, but they seemed genuine to me. I found a lot of things improved in this book over the second one in the series. For starters, Elizabeth becomes her strong independent self again. There is no simpering and acting like a child whose husband has to guide her in every step. Also, Oke tones down the preachiness and instead reverts to her Christian values as they were in the first book, lead by example, not by sermon. Oke's writing as always is very homey and clear. Her books are pleasant with nothing that would be considered offensive. This book, like the others in the series, is written from Elizabeth's perspective. Oke's characters are very believable in this book. She tries to give the reader a glimpse at the struggle for Elizabeth between the Indian and English languages and shows her attempts at translation. She also makes her characters have faults rather than be perfect at all times. Since it is a C

Published by Thriftbooks.com User , 15 years ago
The Canadian West series are by far the best of Janette Oke. Most of the books by Janette Oke are simplistic with little depth. But in the Canadian West series the heroine actually grows in her faith etc. and many of the things that happened to her, were very comical, and had real life adventure. How she meets her future husband is hilarious, and I really enjoyed this series. There is no obscene language, or sexual instances, and anyone could read these. I know I first read them when I was around 11. A great book I would recommend to anyone.

Published by Thriftbooks.com User , 22 years ago
Janette Oke has done an amazing job of bringing to life the history of the Canadian West! "When Breaks the Dawn" depicts the trials faced by the law enforcement officers (Mounties) on the harsh frontire but it also intricately entwines elements of Christ's gracious provision and protection as Wynn and Elizabeth Delaney work and interact in the small northern community of Beaver River. It will touch your heart and move you to laughter and tears as you join Elizabeth in her ventures as a school teacher and share her pain of the lack of a child. You will worry with her as Wynn is out on duty and become an accomplice in her stuggles. Each moment reading this book is to be savored and will be thoroughly enjoyed.
Trustpilot
Copyright © 2022 Thriftbooks.com Terms of Use | Privacy Policy | Do Not Sell My Personal Information | Accessibility Statement
ThriftBooks® and the ThriftBooks® logo are registered trademarks of Thrift Books Global, LLC